Is Corruption in Egypt Decreasing? 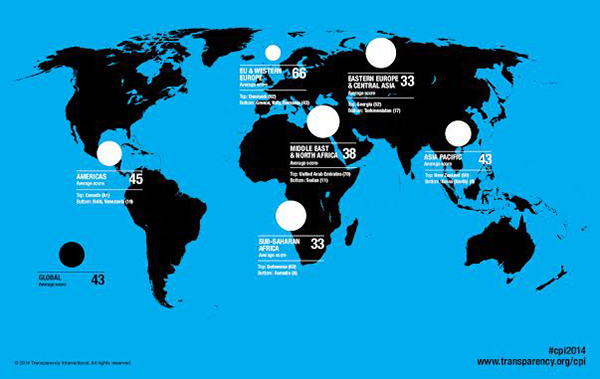 When ones thinks of Egypt the first thought that comes to mind is likely the rich history associated with the ancient Pyramids. However, a close second is arguably its modern corrupt environment. In the country where the wasta reigns supreme, it comes as somewhat of a surprise to hear that this year Egypt has climbed 20 spots on Transparency International's corruption index.

Before the celebrations begin, keep in mind that Egypt still ranks embarrassingly low on the list, however has apparently shown a lot of improvement since last year. Ranked 94th out of 175 countries by the Berlin-based group this time round, Egyptians still struggle to overcome one of the biggest factors that arguably lead to the Jan 25th uprising.

Last year Egypt found itself ranked 114th, however this year they scored 37 points out of 100, a five point increase indicating that things are improving. Sure 37 is still a failing grade, however an improvement is needed even if the changes aren’t noticeable on a day-to-day basis.

"An improvement in one year does not reflect the social change on the ground but rather a relatively improving business climate," Farid Farid, a spokesperson for the group tells Ahram Online adding, "the score of 37 is still shockingly low on a scale of 0-100 where 0 is most corrupt and 100 is cleanest. Egypt has failed to put the necessary reforms needed to effectively fight corruption."

It isn’t clear exactly why Egypt’s corruption has apparently gotten better, especially with the overwhelming evidence that proves the opposite. In April a law was passed that prevent third parties from challenging contracts made with the government, essentially removing any legal or civilian oversight. If that wasn’t enough, Sisi somehow secured 96% of the vote in June election and has assumed total power in the absence of a parliament. However, all of this pales in comparison to the fact that last Saturday the courts acquitted Mubarak who spent 30 years robbing Egypt of billions through the environment of corruption that he helped foster.

To see the criteria used to rank Egypt click here.