Is India the New Israel?

As India's 2014 elections grab the world's attention, Anam Sufi considers the surge in support for the Bharatia Janata Party, infamous for its "India for Hindus" stance and wonders if apartheid is in store for Muslim and secular Indians... 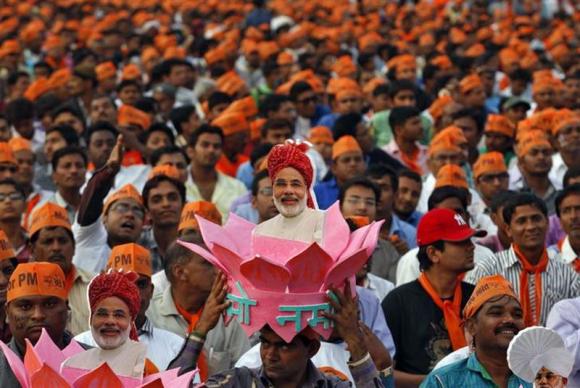 India is a country that has stood firm against the passage of time, maintaining a place in the spotlight. From Maharajas to modern day, it is a place much coveted by tourists and historians alike. But of late, perhaps it is time to view the country in lei of a darker reality, one that has largely been eclipsed by its reputation for economic progression. We live in an era where political ideologies are dominated by the zeal of democracy. After the “Great Wars,” self-determination became a salient characteristic of developing nations and the idea was to promote one’s image as being the greatest advocate for democracy. While we all know that the reality is far from this, the need to recognise exactly how far, is becoming increasingly necessary in the case of India.

Since its creation, Israel has found itself in the center stage of contention owed to its controversial foundation in Zionism, as well as its domination of Palestinian territory. Built on the idea of a land for Jews, and executed in a manner that has flagrantly undermined Palestinians, Muslims, and non-Jewish residents, Israel is notorious for committing human rights violations and implementing acts of violence that are on par with the Russian pogroms that had seen Jewish populations targeted in Russia, during the 19th century. While the question of Israel is a popular subject that has monopolised world headlines since its establishment, the Indian question has portentously lain dormant and unstudied by the international community.

In saying this, the matter has quickly been removed from the backburner and earned crucial recognition in lei of the upcoming government elections that are to take place in India. Although the Congress party has maintained power in India for the majority of the past decade, today there is a serious surge in support for the opposition party; Bharatia Janata Party (BJP). The BJP, led by Narendra Modi, is infamous for its extremist Hindu ideologies that promulgate the notion of an “India for Hindus.” Having forged complex and deep ties with Indian diasporas in the West, the party has built a strong treasury and support network to see the fulfillment of its vision.

Much like the Zionists in the shaping of Israel, members and followers of the BJP have created an identity based on militant nationalism. Such militant nationalism feeds on the victimisation of a particular people, in this case Hindus, and argues that the religion of Hinduism is threatened by the dilution of the nation by secular Indians and Muslims alike. Furthermore, such victimisation is also rooted in the historical narrative of the country, particularly its extensive entrenchment in the colonial system of the 19th century.

Despite a command to establish an Indian state for Hindus seeming unfeasible in the grand scheme of things, it should not be left unchecked; especially given the BJP’s history of violence against Muslim communities within India.

To cite a couple of examples, one might look at the demolition of the Babri Mosque at Ayodhya, in 1992, and the Gujrat massacres in 2002. The former involved the destruction of a Muslim place of worship, based on claims that the land held religious value to Hinduism as well. Bolstered by the Vishva Hindu Parishad (VHP) party (a party associated with the Sang Parivar, an umbrella of Hindu nationalist organisations that also include the centre-right BJP party), the demolition took place at a time when tension between Muslims and Indians was at a peak, and the act significantly proved the rampant desire of the right wing political parties to raze Muslim presence and influence within India.

The Babri Mosque being raided in 1992.

The Gujrat massacre that took place ten years after the incident of the Babri Mosque, involved a spate of killings that targeted Muslims. Some sources claim that up to 2,000 Muslims were killed, and numerous incidents of rape, arson, thievery and destruction were commonplace. The Gurjat massacre is again gaining much speculation today, as during the incident, Narendra Modi (leader of the BJP) was considered a strong suspect for condoning and helping facilitate the massacres. Such views were only heightened when key members in the VHP party were recorded saying that were the displaced Muslims to return to Gujrat, they should do so as subjects and not as equals. Furthermore, members of the VHP were also recorded saying that the Gujrat massacre was a lab experiment that they would like to see executed across all of India.

While a distinction between the BJP and VHP is noteworthy, the two parties have a history that is marred by disrepute and violence. With Modi and the BJP gaining popularity and acquiring a winning chance at securing office in this year’s election, the situation demands the world’s attention, if not to prevent and mobilise support for the more liberal opposition, than to at least let the far-right and centre-right parties know that they are under scrutiny by the international community. A repetition of the Gujrat massacre or the demolition of the Babri Mosque will be deemed unacceptable, and will not pass without serious reproach.

What heightens the political climate unfolding in India is its geographic and historic relationship with Pakistan, a country founded on the notion of a land for Muslims. Maintaining a polemic and rocky relationship that has yet to see a wholesome peace, Pakistan and India are both equipped with nuclear arsenal. While this may ensure a stalemate in terms of mutually assured destruction, the ascension of an extremist right-wing party that belittles the rights of the Muslim communities in India can certainly not translate into good news for the peace process between the two nations.

Long has India struggled to establish itself a democratic state, one that upholds all forms of liberal values that emerge in the process of democratisation. Voting in a candidate like Modi, one who is sullied by accusations of promoting violence and enforcing class and religious distinctions between Indians, would not just be a step, but a leap in the wrong direction. A victory for Modi would not only prove detrimental to Muslim communities, but to secular Indians as well. Accordingly, the world needs to remain alert to the resurgence of extremist and fascist political powers.

There is an argument to be made that holding Zionism and Israel against the threat of militant nationalism in India is a bit dramatic insofar as comparisons go, but surely there was a time when the thought of Israel and its unchecked abuse of Palestinian and Muslim communities within “its” territory seemed illusory.

What has history taught us? Pay attention.