The Ministry of Interior has announced that they will be hiring private security firms to safeguard football stadiums. 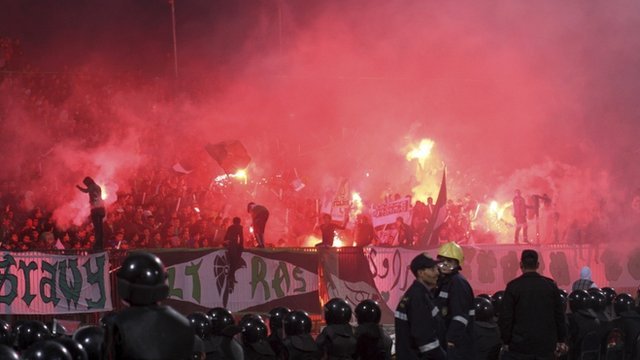 On Monday, the Ministry of Interior's spokesman, Hany Abdel-Latif, made and announcement that the ministry will effectively relinquish control of security at Egypt's football stadiums for the next season. The statement was made over the radio saying: “The interior ministry has the same vision as the Ultras groups. We support their demand,” referencing a joint statement made by five ultras groups earlier that day.

Abdel-Latif specified the new shift saying: “Security forces will be only concerned with safety outside the stadiums. But they will have the right to intervene at any time if violations occur,” adding that “this season will be completed behind closed doors and starting from next season the securing of football matches will be handed to private companies.”

As always, the ministry's statement has been taken with a grain of salt, considering that Egyptians officials have a habit of saying things but doing something else, a sentiment shared by the sceptical Ultras Ahlawy. They believe that this announcement is similar to the situation that unfolded with university campuses, which the ministry previously claimed it would not intervene, but did whenever they wanted.

Tensions have been mounting between the Ultras and the ministry since the events that took place on March 1st, when the ministry banned Zamalek fans from attending a match in Cairo, resulting in a clash outside the stadium that ended with clouds of tear gas and birdshot.

According to an anonymous Ultra member: “We would like to watch the games”, the member said, adding that “there is a problem between the [interior ministry] and the ultras groups, and there is no solution.”

As it stands, Ultras on all sides of the fence are demanding that the ban is removed, and very few think that ministry will follow through with their new statement. There is still no word which private security company will be hired to maintain the peace, but nevertheless a solution is needed. Hopefully the ministry will actually put actions behind their words, otherwise Egyptians may just have to settle on watching their beloved heroes in cafes instead of stadiums.