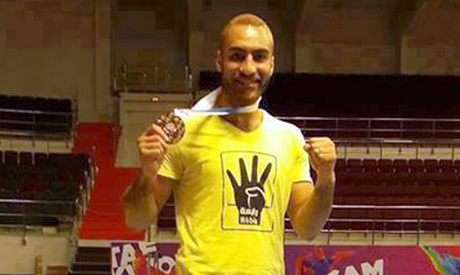 It appears that in the new Egypt, having a memory is punishable. We are no longer allowed to remember a deceased Egyptian who might have garnered a different political viewpoint.

Unfortunately, this lesson had to be learned the hard way for Egypt's Kung Fu professional, Mohamed Youssef, who was the recent recipient of a gold medal in Russia, at an international competition. His “mistake” involved adorning a Rabaa T-shirt that publicised the pro-Morsi four-finger Rabaa symbol, while receiving his medal.

This symbolic gesture resulted in Youssef’s swift deportation, and the Egyptian Kung Fu Association have banned the gold medalist from participating in the next round. They even stripped him of the gold medal that made Egypt so proud. Such acute repercussions raise the question; Egypt has a Kung Fu association? Well it is does. And just like every other impotent association in this nation, they too fear the military when they shouldn't; especially considering they strive in the field of Martial Arts.

According to Egypt's Kung Fu Association executive officer, Gamal El-Jazzar: "He will also be banned from representing Egypt in the coming Kung Fu World Championship that kicks off on the 27th of November in Kuala Lumpur." This move is absolutely ridiculous considering the limited number of gold medalists in Egypt. Instead of being celebrated, the young athlete is being reprimanded for remembering the scores of Egyptians who lost their lives in the recent clashes that took place in the country.

No matter what side you are on in the reigning political nightmare, the dead should be remembered, and lessons should be learnt. Trying to wipe out history, and pretending that certain events never happened will only delay the recovery process. We need to get past our denial if we ever hope to learn from past transgressions; only then will we inch towards the phase of acceptance. If we as a country can do this, then we all deserve a medal.