In an appalling display of intolerance and violence, a Shiite home was attacked by Salafis in Giza, resulting in four deaths while police forces failed to intervene... 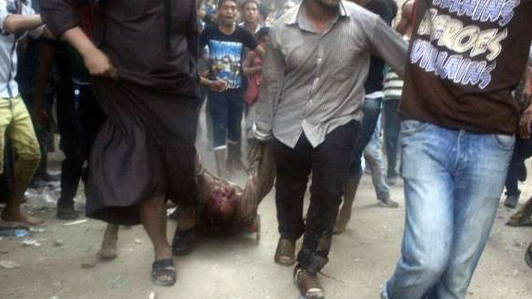 Last night, tragedy struck the local village of Abu Muslam in Giza when a group of angry local Salafists started brutally attacking, and incidentally killing, some resident Shiites. The attacks happened when a Shiite leader, Sheikh Hassan Shehata, was visiting some of the locals for the holy celebration of the middle of Shaaban when the locals started throwing Molotov cocktails at the house, then dragged out the family residing there. Sheikh Hassan was stabbed and killed before being dragged around the streets in a barbaric display of brutality. There were three other victims: Hassan's 55 year-old brother, along with 44 year-old Abd Al-Kader Hasannein Amr. The fourth victim was too disfigured to identify. Reports claim that nearby CSF forces failed to intervene or even attempt to stop the brutality, despite being a couple of metres away from the massacre. The locals then proceeded to drag the bodies to the CSF officers before piling them up in their vans.

Honestly, this is quite a shocking display of sectarian violence, one that shouldn't be displayed in a country such as Egypt. The Freedom and Justice Party, the country (and the government)'s ruling party has failed to release any statement regarding the violent events.

The Shiite community have threatened to 'internationalise' the incident by filing a lawsuit if the Egyptian authorities do not apprehend the murderers. They have named Mohamed Morsi, Hisham Kandil and Mohamed Ibrahim as those who will be taken to court if the case does indeed go ahead.

For more details about the incident, check out: http://egyptianstreets.com/2013/06/24/egyptian-shia-massacred-giza/

DISCLAIMER: The images and accompanying video are quite graphic, so tread with caution.