A round-up of the events marking the one-year anniversary of the violent dispersal of the pro-Morsi sit-ins Rabaa al-Adaweya and Nahda Squares. 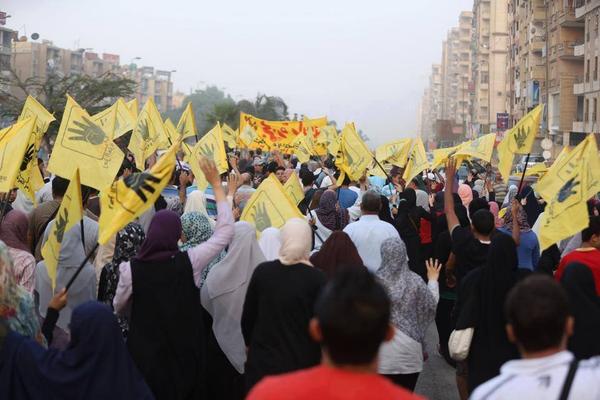 The streets of Cairo were again drenched in blood today as activists took to the streets to mark the first anniversary of the Rabaa massacre.

Five protesters and one police officer were killed and scores of others injured during a day that saw traffic chaos, bombs and violence engulf the capital.

Security forces were on the streets from early morning, blocking off the capital's main squares in anticipation of protests to mark the anniversary of the massacre.

One protester was killed by birdshot in the Nile Delta province of Sharqiya.

Another protester was killed by police gunfire during the dispersal of a similar protest in Maadi.

The fifth protester is believed to have been killed in the Mohandiseen district.

A 31-year-old protester died from a bullet wound to the chest during clashes between protesters and police in Giza.

Earlier in the day, gunmen on a motorcycle shot a police officer in the same district, nearby.

There were also unconfirmed reports of two other protester deaths in the capital.
Meanwhile tens of Morsi supporters cut the ring road in Al-Waraq area early Thursday on both sides of the highway using burning tires.

According to news reports, security forces came and re-opened the vital road and the perpetrators fled the scene.

And in Nasr City, nearly 150 pro-Morsi demonstrators gathered near El-Salam Mosque and chanted against President Sisi.

Meanwhile a top security official in Cairo said 30 members of the Brotherhood were arrested on Thursday for rioting.

Bomb experts were also called to a number of sites in central and eastern Cairo - however no injuries were reported.

Pro-Morsi activists had earlier called for demonstrations to mark the first anniversary of the massacre, which saw more than 800 protesters killed.

The news comes just hours after a damning Human Rights Watch report accused the Egyptian security forces of 'crimes against humanity' for the violent dispersal of the Rabaa al-Adaweya and Nahda Square sit-ins last year.

HRW activists were refused entry into the country following the publication of the report, released to mark the one-year anniversary of the dispersal of the sit-in at Rabaa al-Adaweya Square, Nasr City on August 14 last year.