Smashing Israel From Within

A group of Israeli activists have been ruffling the feathers of the Zionist state for 10 years now, protesting for freedoms for Palestinians. Conor Sheils speaks candidly with one of the most outspoken members of Anarchists Against the Wall... 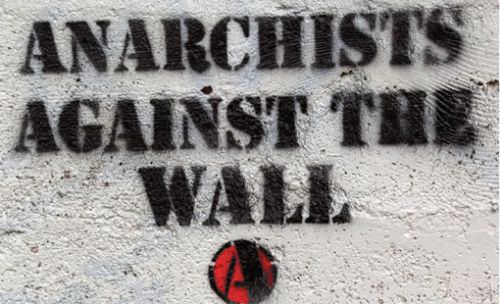 The renewed struggle for peace has brought the Israel-Palestine conflict to a boiling point yet again with many warring groups fighting on the fringes of the bitter conflict. I met “David”, a leading activist in Anarchists against the Wall, a group despised by the Israeli authorities thanks to their  relentless goal to end the occupation of Palestine by any means necessary. Tracking down the senior activist (he stays true to Anarchist principles by rejecting any hierarchy within the group) proved more challenging than expected but after a lengthy string of phone calls, emails and meetings – the mysterious self-styled freedom fighter agreed to talk.

To an outsider, David is a typical Israeli professional with a good job and a normal, average life. However what outsiders don't realise is, David leads a secret double life – chic professional meets enemy of the Zionist state. The charming and intelligent 20-something is frank and forthcoming about his reasons for rejecting his homeland and you can tell that he genuinely believes in the fight for Palestinian freedom.

But how could this mild mannered, well dressed Israeli sitting next to me be one of the biggest threats on the planet to the ongoing Israeli blockade against Palestinian villages?

He is confident and appears to almost beam when he speaks about the controversial group's history. “Anarchists Against the Wall was created 10 years ago. It started as a camp of Israelis and Palestinians joined in around 2008. at the village of Mesha, where the separation wall was being built, taking away most of the village's agricultural land.”

However, David, who claims to work is an academic researcher at one of the Jewish state's top universities, is clear when it comes to describing his own claims that his role within the group involves initiating new recruits to the cause via social media and in person, on the streets Israel.Despite his often candid  answers, the sandy haired activist makes no apologies for what he calls “direct action” carried out by the group which has proven to be a thorn in the side of the Israeli army and the Israeli government at large. He voice booms with conviction, “We're a direct action group, our aim is to have the wall torn down, as well as the occupation in general, and other, less tangible barriers between Israelis and Palestinians.”

Anarchists Against the Wall take part in weekly demonstrations in the West Bank designed at destroying the Israeli separation barrier which many claim has made the life of Palestinian villagers a misery. When asked if he or his countrymen consider his work to end the occupation treachery against the state, he pauses before replying “Most Israelis would think this, yes.”

But he quickly adds: “ I come from a generally supportive family and I choose my friends accordingly.” David claims that the group and its members have suffered relentless harassment from the Israeli regime over the years including “attempts at repression, arrests, interrogations, and intimidation by government agents.”  He also claims that his  fellow activists were fined, and even sentenced to community service or short jail periods for their work as part of the group.

Despite the attempts to silence Anarchists Against the Wall, the fearless protestor believes the groups numbers may mushroom  as sympathy grows, across the region, for the Palestinian plight. “We have several dozen core activists at the moment and the intelligence and information gathered by us has the potential to prove very useful in the future. The ongoing existence of the demos is also an opportunity for visiting internationals to get connected to the struggle, participate, and engage more. The Palestinian people are now asking for help from around the world to come and help fight their struggle.”

David appears educated, well spoken and far from the widely held perception of an anarchist. However, his tone changes when I ask about the Israeli army.

They are very violent towards the demos, shooting tear gas and bullets, sometimes even in violation of their own rules: “When we're arrested, sometimes the soldiers are very violent, sometimes they go by the book.” Though he barely pauses before adding: “At any rate, we always suffer much less violence than Palestinians. If I'm arrested, I'm very likely to be released the same evening. A Palestinian is much more likely to be jailed for months.”

Despite the struggles faced by the group and their Palestinian comrades, David has vowed that the militia will not back down in their campaign for justice in the Occupied Territories. “The demonstrations have had some impact; in various places the wall was moved following demos and legal action, and our presence increased the Israeli media’s coverage of demos. We hope that international pressure combined with internal crises may push the government to give up its control over the West Bank. We will  maintain a structure of resistance, hoping for a change of circumstances and new opportunities to arise.”

And the toughest challenge of all for David? “My ideal solution for Palestine is any solution that would enable all people between the river and the sea, and Palestinian refugees to live together in equality, liberty and cooperation, free to come and go as they please. But this is a question you must ask the Palestinian people themselves; self determination is their right. We are only helping in the battle to achieve what is rightfully theirs – freedom.”