A global campaign, spearheaded by Al-Jazeera, will see marches in over 30 countries to demand the release of their journalists imprisoned in Egypt. 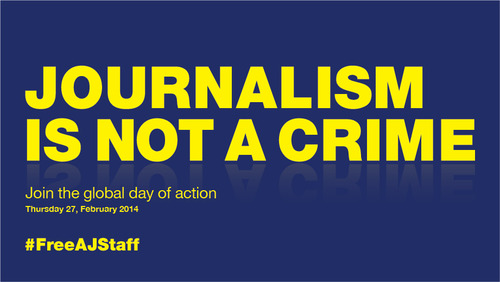 A global day of action has been called for this Thursday in support of Al-Jazeera journalists detained in Egypt. The planned action is growing quickly and will be taking place in over thirty countries including Sydney, Manila, Islamabad, Doha, Amman, Nairobi, Ankara, Berlin, London, Rio, Toronto, Washington DC and San Francisco. Al-Jazeera is urging people from all backgrounds to take to the streets in an attempt to amplify their social media campaign using the hashtag #FreeAJStaff, and ultimately pressure Egyptian authorities to release of their staff

Since the 1st of February, the #FreeAJstaff campaign has garnered over a quarter of a billion "impressions" on Twitter. Dr. Mostefa Souag, General Director of Al-Jazeera Media Network, commented on the action saying: “We truly appreciate the solidarity from everybody right around the world. The pressure, support and calls for our colleagues to be released have continued to keep the story in the news. The Global Day of Action is about the freedom of the press, it is about objective reporting and to ensure journalists cannot be gagged or silenced. We ask everyone to contribute to the Global Day of Action on Thursday 27th February. Journalism is not a crime.”

As it stand Al-Jazeera English journalists Baher Mohamed, Mohamed Fahmy and Peter Greste have been detained since the 29th of December. As for Al-Jazeera Arabic's Abdullah Elshamy, he has been detained since August 14th. The truth is that they are not alone and that there are many journalists who have found themselves wrongly imprisoned. We are yet to hear of any rallies happening in Egypt, but that isn't a surprise, considering the recent protest law being enforced.

The following is a list of demonstrations, open to both the public and the media, organised so far:

Istanbul, Turkey - Solidarity stand outside Outside the Egyptian consulate, 9GMT, 11am local time.

Rio de Janeiro, Brazil - Journalists and the general public are encouraged to take a photo with a "Journalism is not a Crime" sign at "Posto 7" in Arpoador Beach 2030GMT, 5:30pm local time.