Al Ahly player, Saad Samir, made headlines for finding his own resourceful solution to when a player gets injured on the field... 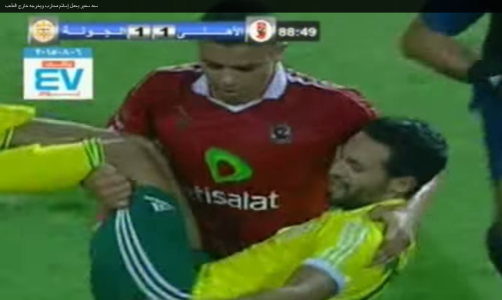 There is nothing more annoying than watching a close football game, only to have a player fall and fake an injury with the sole purpose of eating the clock. Gaining a lot of fans both locally and abroad Al Ahly’s Saad Samir has made international headlines for taking action into his own hands.

Some call it heroics, others impatience; either way it was rather entertaining when Al Ahly’s Saad Samir picked up an injured opponent and dumped him on the sidelines so that the game could continue. The incident occurred June 20th during a face-off between the Al-Ahly and Gouna football clubs. Entering the last minutes in a one-all tied game, Al Ahly was searching for the league's title and wouldn’t be satisfied with a tie. As the clock wound down, Islam Mohareb, a Gouna player, fell to injury. Attempting to massage his cramp out Samir selflessly attended to his opponent, before deciding to pick him and place him outside the sidelines. Immediately Samir was given a yellow card, then a red card, and was ejected from the game.

Surprisingly after the match, Mohareb came to Samir defense, allegedly telling the press in attendance that he asked Samir to carry him off the field. However that statement may make more sense as Mohareb expresses, “I always play as hard and I wish to go back to the Ahly club as it is my home."