How could any female refuse? 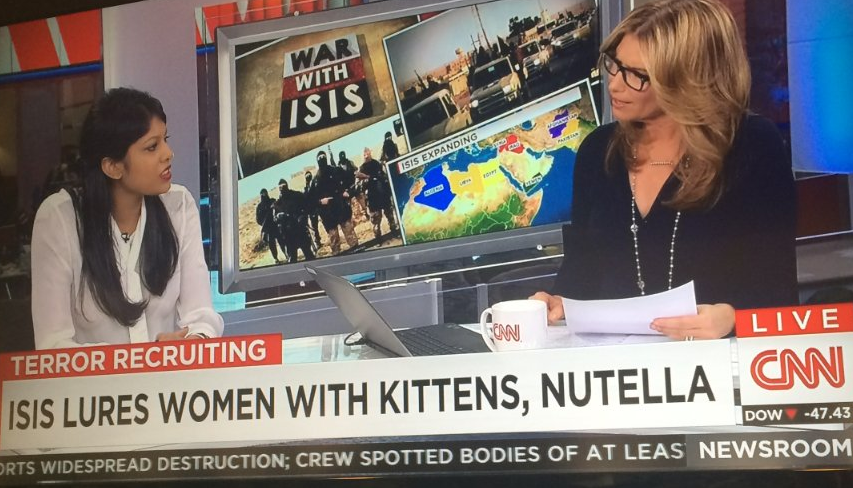 Nutella and kittens and emojis. Don’t even lie, these are definitely a few of your favourite things if you are female. And apparently, ISIS is taking advantage of our unabashed love for this trio of terrific things and using them to lure women to join their jolly terrorist organisation. This proclamation occurred last night when CNN’s Carol Costello was hosting a college professor during a segment that aimed to discuss why women, especially from Western countries, were joining ISIS.

During their discussion, guest Nimmi Gowrinathan, was giving intellectual insight as to women join the group, but Costello had slightly different logic. She told viewers, “ISIS is talking online about jars of Nutella, pictures of kittens and emojis. They want people to believe their life on the battlefield isn’t so different than yours. They actually eat Nutella, and I guess they have pet kittens.”

The on-air banner that summarises the situation popped up at bottom of the screen, reading, “ISIS lures women with kittens, Nutella” with photos of the two and emojis.

If ISIS is recruiting people with kittens and nutella, perhaps we should recruit people away from ISIS with puppies and Reese's Pieces.

Ladies, if a stranger holding a kitten offers you Nutella, they might be ISIS. Stay vigilant. pic.twitter.com/q9MTv7pVN1

The Nutella angle though explains why ISIS wants to conquer Italy next.

Come for the kittens and Nutella, stay for the head-chopping #isis