Spring in the City is Back!

Event Republic is back in action, putting a spring in our steps this March 11th. Find out more here... 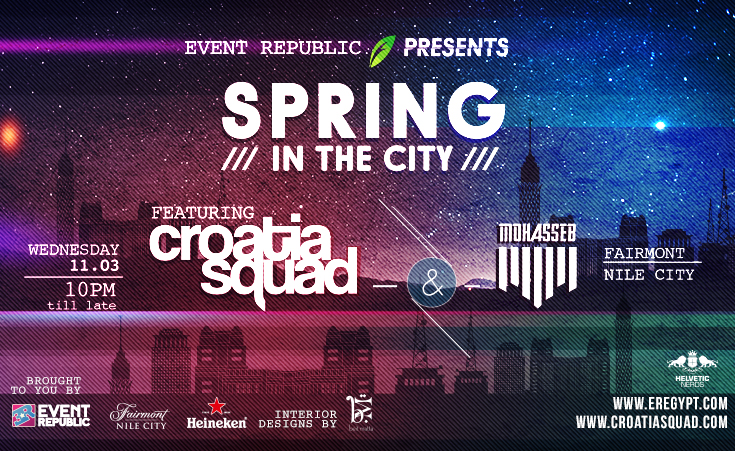 After what seems like – to us sun-soaked Egyptians – an eternity of being mired in the winter cold, spring is on the brink of blooming again and we’ll soon be back to our norm of heat-stricken days. Which is good because we Egyptians were not built for the cold. At the mere sniff of a temperature that’s below 15 degrees the government issues cold warnings and we all go into a panic and everyone stays home and…anyway, spring is coming. And to celebrate the wonder that is the return of the warmth, Spring in the City by party pros Event Republic is also back!

The yearly shebangs are a staple on the Cairo nightlife scene and they’re back for another round of beats and booze. Not just yet – February is still firmly winter, but March 11th will see the first of the party series kick off at the Fairmont Nile City. This year, Event Republic have tapped Mohasseb to go mad on the decks and get everyone grooving. And their headliner is none other than Croatia Squad. Now here’s a fun fact for y’all; Croatia Squad is neither a squad nor is he from Croatia. Though we can’t quite understand his chosen moniker – maybe he just really likes Croatia? Maybe calling himself a squad makes him feel less lonely? The important thing is the Swiss deck master will be flying over and bringing a suitcase full of his Deep House, Nu Disco and Indie Dance beats to ensure a night of non-stop dancing.

It’s set to be one of their signature swanky-meets-shenanigans parties so get ready.