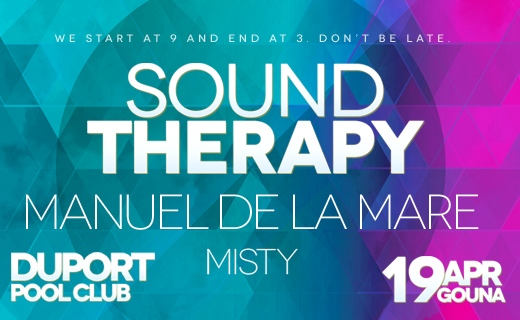 It's that time of year where Egyptians everywhere cop on to the fact that there may be more to life than 9 to 5s, AIDs kofta and good old fashioned za7ma. It's Easter or Spring Break (depending whether you're into giant pink bunnies or Playboy bunnies) which means taking off life's shackles, letting loose and getting some rest and relaxation the only way we know how - partying our asses off. Providing some high-octane stress-relief in Gouna's DuPort this April 19th will be party organisers Coco Mokhtar and DJ Abu Samra, with SOUND THERAPY DIGITAL COLLATERAL. This isn't no lay on your back with candles burning and monks chanting type of music therapy though; they're bringing in renowned Italian DJ and Producer Manuel De La Mare - or Manuel of the Sea, if you like. But in a sea of similar House sounds, he's managed to be a cut above raking in the Beatport 'Best Remixer' award in 2011, as well as 'Best Deep House and Tecnho Artist' nominations a year before.

"As we all know, House music needs no introduction to the Egyptian scene. We want to deliver House music in a very bright and colourful manner within the guidelines of a proper underground House music party," Mokhtar told us. His partner in the project, Abu Samra, has been living and spinning in Spain for the last four years and recently even played at the infamous El Row club in Barcelona. "It was a dream come true" says Abu Samra, "and my goal is to now introduce that atmosphere of the Spanish House scene into our local scene."

Joining Manuel of the Sea will be Misty AKA Moustafa Sheta the DJ/Producer workaholic wunderkind who's been locked up in the studio perfecting his new mixes, and never fails to impress behind the decks.

STDC (as we've decided to abbreviate it) will be an ongoing concept, so stay tuned for more kick-ass events from this duo who should know better than anyone how to party.