Over 12,000 people died on Egyptian roads every year, in a tragic phenomenon that is only growing in numbers. CairoScene explores the main causes behind the problem that continues to claim the lives of so many. 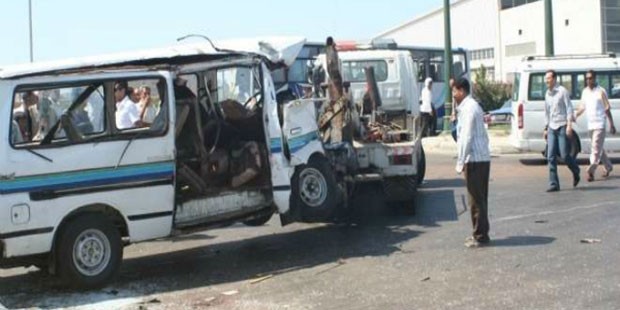 Thousands of Egyptians hit the road each summer to escape the heat of the capital and visit the country's coastal resorts - many never return.

Scores of young men and women are killed on Egypt's deadly highways each summer as a result of reckless driving, driving under the influence and countless other deadly driving mistakes.

The latest World Health Organisation statistics show that there are 42 deaths per 100,000 population, with more than 12,000 people dying on Egypt's roads each year. Almost half of all road crash victims are drivers or passengers of cars, while one-fifth are pedestrians.

A study by Maadi's As-Salaam International Hospital shows that the leading causes of death on Egyptian roads included distracted driving, mainly caused by cell phone use or eating while driving. Meanwhile other causes of death include speeding, which is thought to cause a high percentage of road deaths, especially among young men. Drinking alcohol before getting behind the wheel can prove to be a deadly cocktail, the study further claims.

The hospital's ER manager, Dr. Adel El-Mansy, is brutally frank when he speaks about the shocking road death epidemic currently blighting Egypt. "The enforcement system we have in Egypt is not good enough when it comes to road traffic offences. There are no breathalysers or similar deterrents as we see elsewhere. This has to change," he says.

Dr. El-Mansy believes that up to half of the road traffic deaths he has dealt with are young male drivers aged between 22-30 years old. "The largest demographic that we see involved in accidents are 22-30 year old males. They are the ones who are always showing off or trying to act as though they are racing drivers. They are, quite simply, not playing it safe on the roads and they also tend to travel a lot more than people from older generations.

In a 2012 study, the WHO echoed Dr. El-Mansy's views when it called for 'enhanced enforcement, coupled with greater public visibility and awareness campaigns' in a desperate bid to curb Egypt's spiralling road death problem.

Meanwhile many more are injured by less obvious faults, including poor car maintenance and poor visibility. The study also hit out at drivers who failed to keep their cool behind the wheel, truck drivers driving under the influence and those with a need for speed.

"The main causes of death and serious injuries that we see are reckless driving, switching lanes carelessly by not signalling and of course, speeding," Dr. El-Mansy continues.

However it is not only young people who are guilty of these potentially deadly highway faux-pas."Truck drivers are also a problem on the roads when under the influence of drugs such as tramadol. They use the substance to stay alert for long periods of time, but in reality it impairs their mood and driving skills severely," he says.

"If I could say one thing to men and women, young and old it would be 'please think of the tragedy that is waiting round the corner for you and your loved ones if you die on the road. Don't take risks, it just isn't worth it."