Israelis! At the Disco

Israeli soldiers are caught breaking it down at a Palestinian night club, to the musical stylings of PSY. 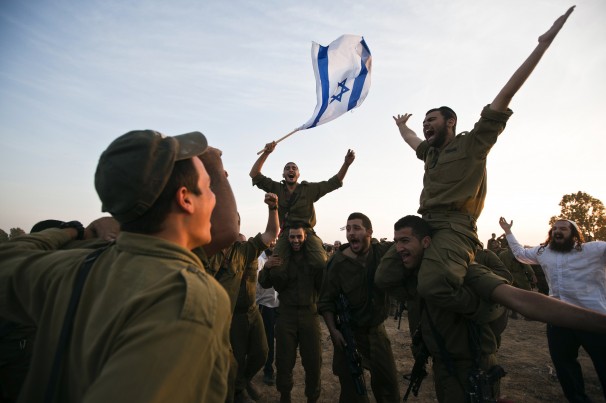 Sure peace talks are on hold, but that doesn't mean you can't find peace in a nightclub in Palestine. On Wednesday, a group of Israeli soldiers were caught on film dancing in a Palestinian disco with a bunch of Palestinian men.

The film was shown on Israeli television and resulted in an uproar. Probably due to the fact that, at the end of the day, the two nations share the same dance moves and terrible musical taste. In the video, you can see a Palestinian man twirling around with a soldier in uniform, weapon in hand, while other man dance around them.

The troops were apparently on foot patrol in the West Bank city of Hebron, when out of nowhere they were captivated by the musical styles of PSY. You heard right - they just couldn't go on spreading their normal terror because, within an earshot, the club was playing Gangnam Style.

This act of reconciliation highly upset the Israeli military resulting in disciplinary actions. The soldiers have been suspended from duty pending an investigation. This is not a surprise, as the Israel military has always had a no socialising with the enemy policy. If they did, chances are they would realise they weren't that different in the end. At this point, negotiators in the crisis have a history of failing and maybe it's time to think outside of the box, and into a nightclub listening to PSY.