Giving a much-needed change of pace to North Coast nightlife this weekend, LaidDaze hits up new beach club Astoria for a relaxed night filled with brilliant music, a few drinks and that warm, fuzzy feeling you can only get from jellyfish... 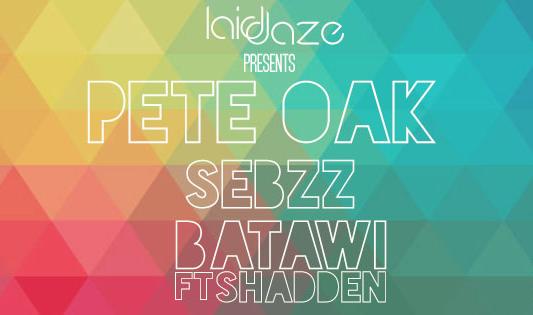 Last weekend saw Cairenes swarm in the thousands to Sahel, not leaving a shot un-chugged, a beach un-walked, a gogo dancer un-goggled at or a DJ un-clapped behind at the drove of frantic Eid parties. It was madness, seriously; just check out some of the snaps on CairoZoom. Every place was positively panting with exuberant young energy, hormones bouncing off the walls; one massive cluster-f**k of Eid escapism and solipsistic seaside hedonism.

Now let's say you've had a long drawn out month or two. You enjoy a drink, you enjoy a bit of House music and the sea-breeze in your face, as opposed a sweaty wreck-head. Sahel may have been a bit to much for you on the first weekend of Haramadan but thanks to the new event organisers on the block, LaidDaze, you're in for slightly more laid back days, as the name suggests. Their first event kicks off on August 7th at quaint new North Coast hotspot Astoria, in Bianchi, with a superb line up of music and an intimate atmosphere. Filled with the sort of hedonism that might make you wake up and go "ahh, what a lovely party that was, tralalaala," instead of waking up in a pool of your own urine on the beach with a dead jellyfish in your trunks thinking about how the jellyfish got there. Nonsense. Anyways, Pete Oak. The Danish DJ/Producer has been making quite a name for himself of late with "an emotional charm that speaks volumes of soul, heart and happiness," according to LaidDaze. It's Deep House, it's Nu-Disco, it's warm and gentle... like the feeling of a damp jellyfish rubbing against your thighs at dusk.

Now a Danish DJ man who makes jellyfish music is super, but then there's Sebzz who never fails to disappoint with his masterful track selections for every situation, and in a setting like this will undoubtedly flourish behind the decks. You've also got Batawi, who came in as runner up in the first Electrum DJ competition a while back, and has returned for Florida with his own brilliant productions and evolved set. Joining them will be the "mellifluous" Shadden Fahim on vocals so you should be in for quite a treat.

Aside from the music line-up, Live Love Egypt will be on hand spreading the fuzzy feelings with some cool arm bands, and psychedelic Cairo street-wear brand UNTY are getting in on the action in a big way, collaborating with LaidDaze to design unique t-shirts for each of the performing artists, reflecting their artistic personas.

Keep up to date with Laiddaze events on their Facebook here.