An unlikely force is joining the current football fever sweeping the world - Somali jihadists Al-Shebab. The militant group has their own halal twist on the game though, which includes their own dress code, and potential floggings. 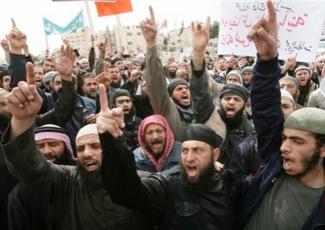 Everyone on the planet is football crazy right now - including Somalia's Al-Shebab militants. However footie-mad militants play a very different game in the rebel-ruled territories. Halal footballers tog-out in kits belonging to Arsenal, Real Madrid, Manchester United and Chelsea but with one key difference - no shorts are allowed. Players musr wear tracksuits, which must reach below the knee while all jerseys must reach the elbows.

Meanwhile the bizarre spin-off also requires games to finish at least 15 minutes before prayer, and no women are allowed at the ground. But these aren't the only twists in the topsy-turvy game where many of the world's most famous goal celebrations are strictly offside. For instance, Balotelli-style stunts, in which a player removes his shirt, will result in a lifetime ban from playing football, while hip-gyrating by the corner flag will earn a player a public flogging and a life ban.

But worst of all is the Premier League staple of blowing kisses in triumph. The stunt is seriously forbidden - unless you want your TONGUE removed. Al-Shabab referees don’t just dish out red and yellow cards, according to the Al-Jazeera investigation. Instead referees sometimes dole out physical punishment such as flogging, in a bid to curb unruly players.

In many parts of the world, referees are known for a tough stance on tackling. However al-Shabab referees are more likely to see red over players' swearing.  If a player swears he is quickly banned from the sport and taken off frontline duty.However shouting the name of al-Shabab's Emir, Sheikh Abu Zubeyr, can win back favours with the referee, who wears long trousers, shirt and a white Muslim Kufi hat.

It's not yet known if the craze has spread to other jihadist factions - however it may be only a matter of time before we see Ansar Beit al-Maqdis topping the North Sinai league.