Living legend and the first four-time Grammy Award winning musician to grace Cairo, the crowds were awe-struck as Eugene Friesen took to the CJC stage. 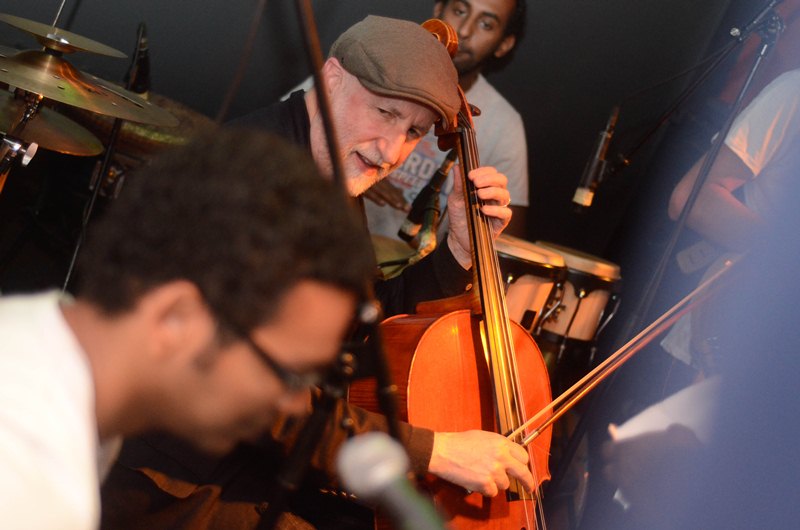 It’s not every day you catch a Grammy Award winning artist, who isn’t Fathy Salama, in action – but then again, not every music venue in Egypt is quite like Cairo Jazz Club. Last Thursday, a surprise addition to Ashara Gharby’s session saw the Celloman himself, Eugene Friesen, join the Oriental fusion Rock band for an improvised jam session, adding some serious musical prowess into the mix.

The night was suitably warmed up by Us we Lazq whose quirky mix of styles got everyone in the mood for a night of original, underground and unmistakably Egyptian music. After a killer set, they got to join the rest of us rowdy crowds for something special.

The dance floor turned into a veritable concert pit, as eager aficionados of REAL music lined up front and centre for a one-of-a-kind performance. The CJC crew couldn’t contain their excitement either, as they took to the stage to introduce the legendary cellist. The crowd roared as the Friesen took his position, amazed by the mere act of his sound check alone. Rounds of applause rippled across the place as Ashara Gharby joined Friesen on stage and they too literally couldn’t believe their fortune to be joined by a musician of this caliber.

The set kicked off with some of Cairo’s favourite Ashara Gharby tracks while swinging and swaying took off among the audience. Showing off his unbelievable skills in both plucking and bowing, proving – as if there was any doubt – why he’s considered one of the world’s best cellist. Without rehearsal, Friesen was able to both add to and blend in with Ashara Ghabry’s cacophony of Afro, Reggae, Oriental and Blues sounds. Between dancing and drinking, all anyone could say was “Eugene dah gamed FASHKH!”  And we totally agree. Ending the night with an epic selfie with the man of the hour, we’re pretty sure Ashara Gharby agree too.

Continuing his Cairo tour, you can catch Eugene Friesen in action again tonight at the Cairo Opera House. Click here for details.