Spotted by residents in an irrigation canal in Giza was a wild Nile crocodile, who was rescued on a mission by the Environment Ministry and the Nature Reserve Authority. 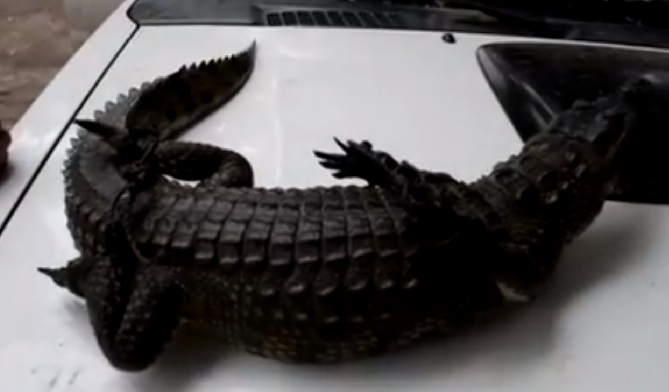 Baffling officials today is the discovery of a wild Nile crocodile that somehow managed to find its way to an irrigation canal in Giza’s Nahya district on Thursday.

The ninety centimetre Nile crocodile was discovered by citizens living near the canal who immediately alerted officials. It is unclear how it ended up in the canal, but many in the area speculate that it was discarded by someone who owned it as a pet.

Looking to safely remove the reptilian threat from the canal, the Environment Ministry with the help of Nature Reserve Authority experts travelled to Upper Egypt to set traps and lower water levels in the area’s drainage system.

The rescue mission was a success and the crocodile has been sent to the Giza Zoo for a full examination. If cleared by the Giza Zoo veterinarians as being healthy, the crocodile is expected to be freed in one of the largest man-made lakes in Africa; Lake Nasser. The huge reservoir located in southern Egypt was made during the building of Aswan High Dam in 1970, and is now home to diverse variety of species.