Bringing comfort food and a taste of home - plus a few chili peppers! - to Cairo against all odds, Executive Chef and Founder of Tabla Luna, Fabian Maldonado, introduces us to new Ecuadorian flavours that have foodies across the city buzzing. 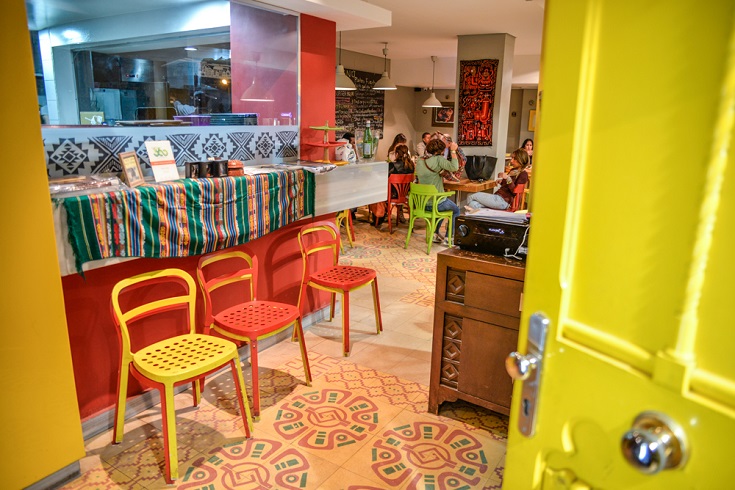 There is no cherished food memory more precious than the comfort food routinely eaten during childhood. No matter where you go in this world, no matter what cuisines you try, there will be no substitute for the dishes made and shared by those you love most. For foreigners living in Egypt, finding a true taste of home can be extremely difficult, but not as impossible as choosing to introduce a whole new cuisine to a country of picky eaters. Defying the odds is Fabian Maldonado, Executive Chef and Managing Partner of Tabla Luna, who decided to import flavours from his beloved Ecuador and introduce its uniqueness to Egyptian taste buds.

Spending most of his life growing up in the city of Quito, Ecuador, a young Fabian Maldonado loved nothing more than helping around in the kitchen, and learning how to make his favourite childhood foods. “I learned to cook from my mom; when it comes to cooking, I used to help her mash food, or bake. My sister also taught me how to cook certain dishes; after that, I became one of those people who can eat things and identify what’s in it, and after that it became a matter of trial and error,” says Maldonado, explaining the source for his culinary passion. Arriving in Egypt at the turn of the millennium, Maldonado didn’t arrive as a professionally trained chef, but as an educator who expected – like most teachers – to spend a year or two here before moving on to next contract, the next country. “I'm a teacher, so I came here like a lot of other foreigners, just thinking about my two-year contract, which got extended for one more, and then I met my wife and decided to stay for one more year,” Maldonado recalls. “That year also got extended; we got married 10 years ago and we opened this place two years ago.

Still teaching today, Maldonado found himself with a family in Egypt, whose dining scene robbed him of the opportunity of introducing his loved one to his most cherished meals growing up. With the support of his wife and business partners, the couple embarked on a risky venture to introduce Ecuadorian/Peruvian flavours in an Egyptian market often only familiar with faux Italian, French, and Japanese cuisine. “I'm the executive chef, the managing partner, and the founder,” Maldonado explains. “My partners are my wife, Haydi Tawfeek, and Dalia Toulan and her husband, Tawfeek El Kheshen.” Together, they launched Tabla Luna in 2014, and it has quickly become one of Maadi’s unique culinary hotspots, serving authentic Latin American flavours made the same way with the same products from Maldonado’s native Ecuador. “I grew up eating ceviche and arroz com marisco; those are the flavours of my childhood, and we try to keep them exactly the same as they are done back home. We import many different kind of chilies that we mix in certain ways; every dish has a different mix of chilies,” Maldonado proudly exclaims. Entering through the bright, inviting yellow doors, we were instantly met with a quant comforting space and a colourful chalkboard filled with exciting Latin American flavour combinations, teleporting our taste buds to South America. However, on this particular day, Maldonado would treat us to a time travelling adventure, generously offering us his favourite childhood dishes that he couldn’t live without in Cairo. We are presented with some deliciously authentic empanadas, perfectly balanced shrimp ceviche served with an interesting side of popcorn for texture, and a fresh platter of tortillas served with a special family recipe for an Ecuadorian chili sauce known as Aji. According to Maldonado, “Aji is an Ecuadorian chili sauce that you find in every Ecuadorian house, and the empanadas are the international equivalent to sambosak. Whenever mom was around and in a good mood, she would make some empanadas and, when filled with meat, we called them salteñas.” As he presents the ceviche, Maldonado explains that this dish may be the most authentically Ecuadorian dish on the whole menu; “Ecuador is one of the biggest producers of shrimp in the world, and, out of the whole menu, this may be the most Ecuadorian dish. Anthropologists have also concluded that ceviche made with fish is Peruvian and the one made with shrimp is Ecuadorian.” For the entrees, Maldonado introduced two dishes. The first he fondly remembers as weekend food growing up; an Ecuadorian twist on what many know as a Spanish paella. The second entrée appeared reminiscent to Chinese stir fry, but as Maldonado admits, it's a Peruvian dish. “It's made of very simple flavours; pieces of meat are cut and fried in really hot fire, and then you just stir in the vegetables and add sauce. It looks Chinese; it’s cooked with a very Asian style, and use of potatoes next to it makes it very unique.” The meal was exceptional, but even better was the experience of hearing the childhood stories that had inspired the dishes we had just devoured. Over the course of dinner and conversation, it was apparent that Tabla Luna was no secret in the area. Reservations seem to be a must, as the place is small and always packed. In just two short years, this test on the Egyptian taste bud market has proven to be successful, and given Tabla Luna the opportunity to expand to a second location in 6th of October City.

It is rare to find cultural cuisine that authentically transports you through flavour and time, leaving you feeling like you are at a grandmother’s South American kitchen on the weekend, but Tabla Luna managed to channel that feel. Although the menu may seem intimidating to those who know nothing of the cuisine, there was more than ample reason to return, as every new combination we tried was a delight and excited us to want to go back and get more adventurous with our near future menu selections. Getting to eat Maldonado’s childhood favourites was a wonderfully delicious educational experience, and although he admits that opening Tabla Luna was an extreme gamble, it seems to have paid off as he continues to share his native home flavours with his family and a growing cultural-cuisine-accepting Oum el Donia.