The moving-picture adaptations of basically all the comic book characters ever have the geeks of Egypt sweaty and nervous in anticipation. 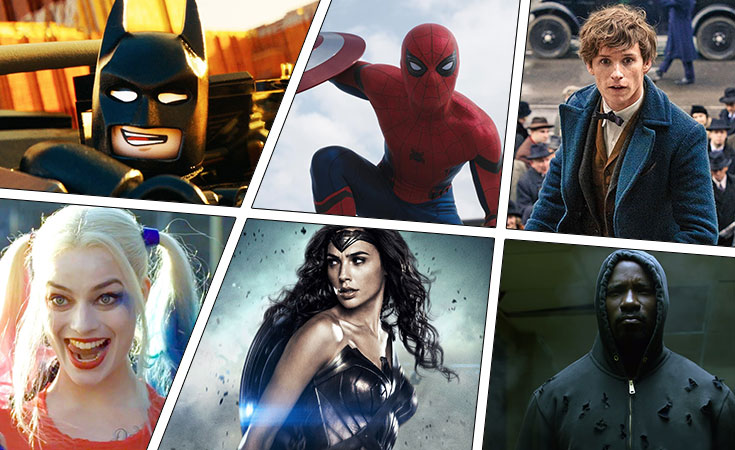 San Diego Comic Con is like the Mecca for all kind of geeks the world over; panels and presentations from the biggest names, as well as independent artists, showing off the newest versions of classic characters as well as all the brand new characters for us to obsess over. Very few Egyptians got to make the pilgrimage this year, and they certainly missed a lot, but thanks to the futuristic magic of the internet they can experience most of the big announcements and the geeky freaking out without having to leaving their computer chair. Here are the 12 things from SDCC that Egyptians were most stoked about.
Fantastic Beasts and Where To Find Them.
Harry Potter is one of those franchises that still hasn’t lost its ability to just straight up print money so of course, we’ll be seeing a prequel on the big screen this November. Taking us back a couple generations and across the pond to 1920s America, the flick, based on J.K. Rowling's 2001 book, tells the story of Newt Scamander and his dumb idea to bring a briefcase full of magical monsters to the states. Egyptian Potterheads have been abuzz about the movie for a while but the newest footage from SDCC, showing off more of the Fantastic Beasts than previously seen, has them genuinely freaking the heck out.
Wonder Woman
DC is trying real, real hard to catch up to Marvel’s cinematic universe and with the general consensus being that Batman v. Superman kind of, well, sucked it seems like DC’s got their work cut out for them. One of the almost universally acclaimed parts of BvS, Wonder Woman is now set to get her own feature flick and after years of almosts and not quites, the first trailer premiered at SDCC shows she’s definitely not messing around. The setting is original, the action solid and the joyously feminist message is right out there in the open where it damn well deserves to be. When the end theme comes in over the Wonder Woman logo and you’re like ‘whoooa!’ is only trumped by the little ’secretary' teaser afterward. This is a movie Egypt needs, hard.
Suicide Squad
After the mixed bag that was Batman and Superman: BFFs, everybody was understandably concerned about the state of the DC cinematic universe. Suicide Squad, even though it was well into production by the time BvS came out, is the total antithesis of everything Zack Snyder and co. have done so far. Full of humour and, *gasp* colours, our brief glimpses at this sequel (prequel? does anybody know?) have Egyptian fans going bonkers. Especially with the first big screen adaptation of fan favourite Harley Quinn and Jared Leto’s um, ‘unique’ Joker.
Justice League
DC went all out at SDCC 2016 by giving us the first Justice League trailer only a few scant months since Batman v. Superman was in theaters, bringing together Earth’s mightiest heroes (no that’s the wrong superteam, sorry) for their first live-action adventure. There’s no Superman in the trailer because he died in the last movie (yea, right) but that didn’t stop the geeks of Egypt from getting their Superfriends undershorts in a bunch, especially at the sight of Jason Momoa’s hunky Aquaman and Ezra Miller’s sassy Flash. Shying away from BvS’s grim, monochrome, melodrama, the Justice League trailer actually has jokes and more colours in its two and a half minute runtime than all three hours of the last movie.
Egyptian fanboys rejoiced for the most part but a few criticized the wildly different tone of the trailer compared to BvS, making Justice League seem like it had the same irreverence and zaniness as Suicide Squad. Fans also lamented The Flash’s suit saying that it resembled Marvel's Iron Man just a little too much.
Lego Batman
A sort of sequel to 2014’s The Lego Movie (which you should see if you haven’t because it rules) which also featured a blocky Justice League, The Lego Batman Movie takes one of the most revered characters and throws all the brooding gloominess of recent incarnations out the bat-window. An all-star cast of voices with Will Arnett as Batman, Michael Cera as Robin, plus Zach Galifinakis and Rosario Dawson and more mind melting Lego-effects has many in Egypt losing their bricks.
Doctor Strange
The newest Marvel hero to get his own feature film, Doctor Strange opens up the universe of the Avengers to all sorts of magic possibilities. Benedict Cumberbatch dons the cape of the sorcerer supreme in a multidimensional origin story that will have some viewers questioning whether somebody slipped psychedelics into their popcorn if the SDCC trailer is any indication. Still, some comic book nerds have lamented the supposed ‘white-washing’ of the cast, taking roles portrayed as eastern Asian and giving them to caucasian actors.
Guardians of the Galaxy Vol. 2 The follow-up to Marvel’s surprise smash hit space opera starring a super-soldier Raccoon and a sentient tree played by Vin Diesel can’t come soon enough for the geeks of Egypt. Volume two of this sick mixtape brings in Kurt Russel who, it was revealed at SDCC, plays the living planet Ego, who also happens to be Star Lord's dad. This is exactly the kind of wacky ridiculousness that we would expect from a Guardians of the Galaxy movie. While the trailer that was shown to the teeming masses at Comic-Con isn’t available online yet, reactions posted to social media by those that witnessed it are crazy positive.
Spider-Man: Homecoming

Since his nerdgasmic premiere in the main Marvel cinematic universe in Civil War, fans, especially in Egypt, have been clamouring for more Tom Holland as Peter Parker. While the trailer that amazed convention-goers isn’t available online yet, their reactions are full of nothing but praise. The idea of Michael Keaton as a technologically advanced version of the villain Vulture facing off against the best version of the wall-crawler to ever hit the big screen and the possibility of cameos from other Marvel alum has us all stoked for Homecoming.
Thor: Ragnarok SDCC attendees got an exclusive look at what could be a buddy movie with Thor and The Hulk. While details are still pretty scarce on the plot, the trailer did confirm a long-standing theory among Egyptian ubernerds since Hulk’s involvement in Ragnarok was announced - that the film would adapt parts of the well-regarded Planet Hulk comic. Watching Hulk face off gladiator-style with the biggest, baddest beings in the universe and even the mighty Asgardian himself is something comic book fans have been preparing for. The replica Hulk gladiator armour on display at SDCC was all over the internet with tons of excitement proclamations about seeing one of the most popular stories in Hulk’s lengthy history being adapted into a big-budget blockbuster.
Iron Fist
The brief teaser shown at the convention was enough to have folks talking up the impending arrival of the martial arts master while rapidly searching the internet for info on The Immortal Iron Fist so they can look cool before the hero shows up on Netflix.
Luke Cage
Marvel was pushing its Netflix series heavily at SDCC. The arrival of Luke Cage in his own series has been high on the list of demands from comic book fans since the character debuted in Jessica Jones.  The fact that the producers are calling the show "the Wu-Tang-ification of the Marvel Universe” has just driven expectations even higher.
The Defenders
While the teaser trailer from SDCC did not show much, it was still enough to get the Egyptian geeksphere buzzing with excitement for the Netflix original series that will bring together the grittier, more violent heroes of the Marvel universe together.