Caged: The Horrific Reality of Pet Shops in Egypt

Pet shops in Egypt are a breeding ground for miserable animals, who suffer through poor conditions and bad treatment. We speak to animal rights activists and go undercover to discover what kind of of lives animals in pet shops really lead... 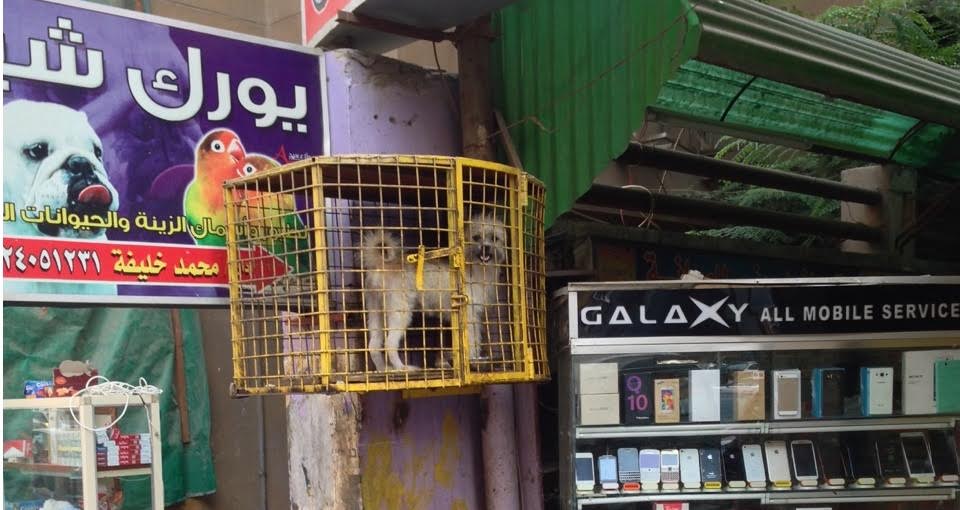 In the scorching heat of Cairo, animals are forcefully placed in windows, like some substandard lifeless product, caged in their own feces with little or no love in pet shops across the city. The people operating such enterprises are far from animal lovers; they’re the most inadequate individuals to be put in charge of taking care of our furry friends. From death by starvation to abandonment we take a closer look at these limbo-like places where animals are born to die. We went undercover to take a look at the horrid condition in which these animals have to live and speak to animal rights activists, who were able to help us shed light on these alarming truths.

Animals, unless they're Glass Animals, are somewhat ignored in Egypt, with the exception of very few people who still have the common sense and knowledge of not abusing a living breathing soul. It’s hard to tell which is the greater evil, breeders or pet stores, as they are both seeking to gain profit with minimal to no regard to the animals they are raising and selling. Amina Abaza Mishriki founder and Chairperson of the Society For The Protection Of Animal Rights in Egypt, also known as SPARE said, “Pet shops in Egypt are concentration camps, the owners don’t know anything about animals, all they know is the price of the dogs and cats. Even when some animals die it’s not a problem for the owners because they have a breeding farm where hundreds of animals can simply replace the ones who died. These people make a lot of money and don’t even vaccinate the animals so many of them die in the shop or a few days later.” SPARE was founded by Amina and her husband in 2001, making them the first fully self funded Egyptian animal rights group. Amina founded it because she was getting fed up and desperate from all sorts of different abusive acts that we still see in our streets till today; donkeys beaten, starved, made to carry huge weights and thrown to die when they can’t work anymore; dogs and cats being abused, poisoned and shot. She added, “I have been to pet shops, talked to the owners, called the General Organization for Veterinary Services - this is their responsibility. I had fights with many of them especially the one in Kasr El Einy street. We had one in Zamalek, which is closed now, but I would go many times to treat the cats and put drops in their eyes. I would talk to the owner of the shop, give him books and even buy food from his own shop to feed the animals in his store. In Zamalek, I have bought eight Persian cats at 300 LE; I saved them because they were kept in iron box one, on top of the other. They were peeing on each other, it was horrible. So I imagine that they sell them for very cheap prices or just let them starve to death. This is what happens with the horses at the pyramids - I have seen it with my own eyes.” REFK is another, more recent animal rights foundation which started only a year ago and they mainly deal with breeders and the issues derived from such. We spoke to Sherif Magdy the founder and CEO, who told us, “The breeders are people who deal in animals as a trade - they don’t care about anything but the money and how to earn more by selling more. Some are worse than others, but more than 90% are really providing awful conditions of breeding. Picture the pet or the animal as a man drowning in the sea. At first sight he may seem to be having fun and playing in the water but if you get closer you will see his life coming to an end.” He added that they try to tackle the issue with no tools, and other foundations are dumbfounded when facing this epidemic. They merely have to rely on the breeder’s compassion or mercy and more often than not, it’s lacking. And not only is compassion lacking, the laws are absent, the laws are actually against us. For instance, you can’t go into a breeder’s house, or a pet-store see the horrid conditions and call animal welfare.

So what can we do as enlightened or educated people that are supposed to be setting the example? As pulses of our families and communities we are the ones who should be making the difference, so it’s simple. First, we need to create awareness programs in low income areas where we see many of these torture cases on social media, because the children are brought up in a defunct environment. Our media should get involved, because yes there are human rights issues at hand, but how we treat animals ties into this issue; how is it in good conscious that our government is poisoning street cats and dogs in a barbaric fashion, teaching us that this is the norm, and then expect us to be civil towards each other? When problems are addressed by our leaders like we exist in a civil country, only then will the uncivil be forced to act differently.

This was posted by an official running in the 6th of October area and it reads "police forces have agreed to poison dog food and two rifle guns with plenty of ammunition were also purchased, to efficiently get rid of stray dogs quickly, but the only obstacle is monitoring the poison as some of the homeless resort to the garbage and trash for food, making it dangerous." Many other neighbourhoods have resorted to this same technique, and this is a clear example of how the government is teaching, or even encouraging the systematic killing of stray animals.

Another way in which you can help is to not encourage the industry of pet shops by buying from them; there are plenty of great loving animals who whose gratitude would be unparalleled if you rescued them. The only reason to go into a pet store is to buy food, or to set the animals free from these hells, and as for breeders, we can only hope their mercy grows. And as the SPARE logo reads, “We don’t have a heart for humans and a heart for animals, we have one heart or none at all.”