So Suarez's recent case of the munchies suggest that he really wants a bite out of the World Cup pie. We have a few ideas on where his recent biting-binge might be coming from. 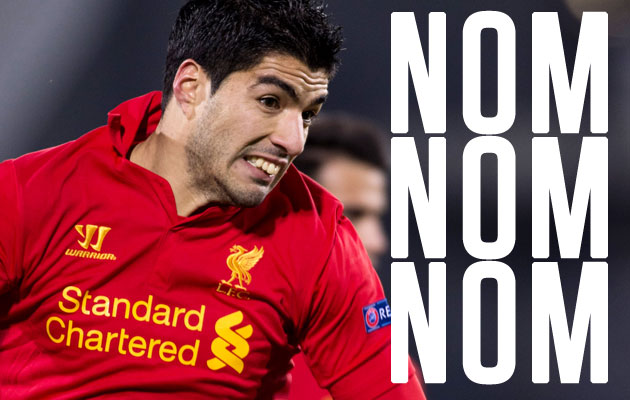 This is the least cute or funny time a dog has run on to the pitch and caused havoc. Last night Uruguay's Luis Suárez bit Italian defender Giorgio Chiellini on the shoulder, the referee didn't see it, and Uruguay eventually won 1-0, knocking the Italians out and proceeding to the next round of the World Cup. But his reputation now lies in tatters and faces a lengthy retrospective ban.

You see it's not the first time Suárez has bitten a player on the field. In fact there is now a whole website dedicated to the quantity of people who he's taken a chunk out of. His first bite came whilst playing at Ajax in Holland in 2010, and he was suspended for seven games for biting PSV Eindhoven's Otman Bakkal on the shoulder.

While playing for Liverpool in 2013, he was suspended for 10 games for biting Chelsea's Branislov Ivanovic on the arm.

But the question is why? Why does Suarez insist on biting other players? We speculate...
1 - It's a match fixing scandal. A Norweigan fan just won £500 after betting £3 on Luis Suarez biting a player at World Cup. Suarez may have been in cahoots with him.

3 - He's a cannibal and what better place to get a taste of the finest International cuisine than at the World Cup?

7 - He is in love with the victims and is simply trying to give them hickies.

8 - He played too much Pacman as a kid