5 Types of "New Age" People Who Ruin it for Everyone

As things like Yoga, meditation and energy healing become more and more popular in Egypt, there are those who take it too far... 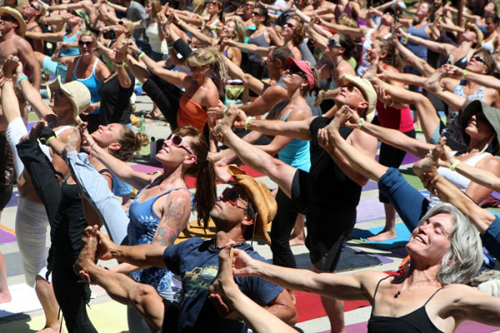 This New Age thing is really taking off, huh? With many people nowadays connecting to nature and finding inner peace through common practices like yoga and meditation and healing oneself naturally at an all time high, and like anything else, there's always a few of us who tend to take things overboard and ruin it for everyone else. It takes a lot of discipline and dedication for the spiritually novice to be open and vulnerable and practice all of the aforementioned without self-restraint and while we do believe in live and let live, every so often we'll see one of these people who will walk into our yoga or meditation class and just straight up ruin it. It's weird when you get on Facebook and see the one person who is constantly posting Eckhart Tolle quotes, and sharing those weird Berlin art-parasites photo things. From the occasional magic mushrooms will cure the zombie apocalypse, to why you can't eat anything anymore because it's all shit, this person just won't stop; they're relentless and they have nothing else to say or much to post about except this shit, which makes us want to break....OHMMMMMMM

The One Who Always Looks Like They Just Returned from India It's an Egyptian past time, much like Berlin or Mykonos, for these people to travel to India for a month or two seeking enlightenment and a Yoga certificate to come bother us with. Regardless of the transformation they went through over there, what really seems to get under our skin is the attire. Those Punjabi-Sinbad-tight-from-the-bottom-and-baggy-from-the-I-just-returned-from-India-pants KILL US. Not to mention the 100 million beads and crystals that now cover all their bodies. Whatever happened to sweat pants or jeans? They're the ones at the front of your Yoga class, trying to impress the teacher. God forbid you do something wrong or say the wrong things or mention meat or animals in a way or fashion they find unsatisfactory; the look you will get from them can move mountains. They will later on proceed to channel some long distance evil energy your way in hopes of ending your life. They will never use normal vocabulary like us; for example instead of saying something like "It's been great having you here," they will instead say some shit like "thank you for bringing your energy into our tribe." Not to be mistaken for... This one's very similar to the judgmental type as they too can be very judgmental but these guys, more often than not, don't shower to save water, don't use deodorant to avoid chemical contact, they're most likely vegan and say the craziest shit like "I love you mother earth," while pulling on some grass, or "let's go back to my yurt and drink some Kambocha" and the not so subtle "I totally respect your boundaries, I just want to to snuggle. Do you feel the energy between us?" They always refer to females as goddesses, and they are always on about feeling this energy or that energy. Next time you see this type approaching with a guitar, have an almond milk ready and throw it at them while running away. When they rest, they do it on a bed of nails. This healer more often than not is a Reiki master because they refuse for their souls to be confined by getting an actual job. As effective or non-effective as this person's healing powers might be, the way they present it is all wrong. They're also Yogi masters, meditation gurus, and Ayahuasca shamans. Obviously.