There's no doubt that 6ix Degrees will be making its mark on the Sahel shoreline, just like Tamarai did on Cairo's skyline. We get up close and personal with Ayman Baky, Ahmed Beltagy and Marc Wahba to learn more about the secretive Sahel hot spot... 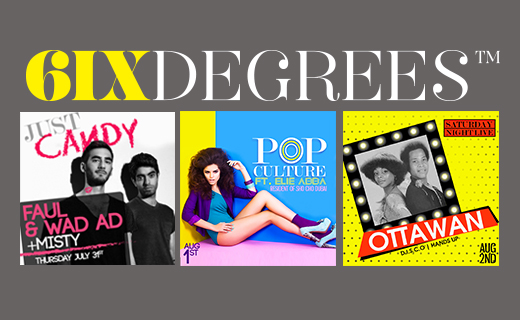 For a period of time, Tamarai were the indisputable reigning kings of parties in Cairo. Notorious almost to a fault, and just ostentatious enough to keep it interesting, they somehow managed to escape the staple six-month shelf life most clubs in Cairo are limited to and the city's partying scene was dominated by them and their excess and glamorous antics. Recently however, the purveyors of party time took a step back, shutting down the club in a move that surprised many.

But now, they of nocturnal infamy are taking back the night with some serious plans for Cairo come September, and in the meantime, namely our remaining summer months, they have set their sights on the seashore. As Cairenes welcome August with some shaker shots and the yearly trip up to the coast for their annual dose of beachside shenanigans, the team behind Tamarai are flinging open the doors to 6ix Degrees their new sexy nightspot in Hacienda Bay that will definitely be making some proverbial waves this season, and they sat down with us to give us a behind the scenes look as to what we can expect this summer.

The name of the new club comes from the now-famous theory of six degrees of separation, which is probably rather apt considering that at any Tamarai function you're bound to know 80% of the people there through some follow-the-bread-crumbs trail of connections. Essentially, "people are all connected together; they’re six steps away…we're all related to each other somehow," Ahmed Beltagy says of their choice of title, which is also a theory that's especially pronounced in Egyptian society. "If you look back at what happened in the past few years, it was a really hard time for everyone and now, we're doing a bit better so in a way it's symbolically a nice motive to party…it's a sort of unity y'know?" Marc Wahba explains. It's fair to say that nothing brings Egyptians together like a good party.

And a good party is exactly what 6ix Degrees will be giving you. Starting with a massive Eid shebang, and continuing with themed nights, the place promises something to please everyone. "We like people to be pampered," Beltagy says simply. From the gorgeous seaside venue, to the service, a whole roster of international DJs set to rock the decks, internationally-experienced bartenders, and a world-renowned chef, "we have all the elements to be very special this summer." And unlike most places, they neither try terribly hard to sell you on their spot, or even feel the need to disclose too much information; because that's the invisible and unspoken power Tamarai has – they can command a following without bells and whistles, without even elaborating upon what they have planned. "We're not reinventing the wheel," Wahba says with a laugh. "No one is. But we're really focusing on the clubbing experience itself. We pay attention to details, we offer quality…and just show people a good time." Whereas other clubs are falling over themselves to reinvent the metaphorical wheel of a party scene, 6ix Degree's team simply delivers. "We've been in the business for quite a while," Ayman Baky explains, "We know what the crowd wants and how we'll cater to them exactly what they want. We have good history."

It is this precise history and the expertise that comes with it that will be the driving force behind 6ix Degrees come Sahel summer. After remaining, by their own definition, somewhat "dormant in the past year," turns out the Tamarai team weren’t retreating from the party scene but rather making a calculate strategy about what they wanted to do next, and waiting for the opportune moment, place, and specific venue to dive back in. "It was important that we distance ourselves a bit to restructure and to bring something stronger and more positive," Beltagy says. They settled on Sahel "because that’s where everyone is; it's like the Vegas of Egypt. It has a really positive vibe," Wahba says. When a previously-closed spot at Hacienda Bay opening up, they made their move. The venue, which had been closed for four years, opened its doors for operation, and 6ix Degrees nabbed it, beating out seven other bidders in the pitch. "This venue is fantastically structured and designed to be a great club," Beltagy gushes. "And we're really excited to have it." Baky adds that "it's been a while since we did something major."

There's no doubt that 6ix Degrees will be making its mark on the Sahel shoreline, just like Tamarai did on the big city's skyline. But interestingly enough, though the team work tirelessly to pull together perfect nights – "it's portrayed as glamourous but behind the scenes it’s not like that; we make a lot of effort and we work around the clock when we’re on site," Baky says – they attribute a large part of their success not to their own abilities but to their guests. "The star of the whole night is not us, and it’s not the DJ – it's the people," Beltagy says. "What really makes the party is actually the crowd," Wahba adds. "They are a big part of the vibe – there needs to be a connection between the crowd and the actual place to see some magic happen." And we can definitely expect some magic from 6ix Degrees this summer.

Though they're keeping their lips sealed on exactly what's to come, they’ve been finicky about every detail, flying in major acts, bringing in local favourites, whipping up some seriously good cuisine, and promising a damn good time all-around. Thursdays are Decadance nights, catering to those hardcore partiers and their House music needs, whereas Friday's Pop Culture nights will conquer a musical variety encompassing everything from commercial House, and Hip-Hop, R&B, and Arabic, and their Saturday Night Live nights will feature – you guessed it – real live music. They're tight-lipped but we are nothing if not persistent. "I can reveal just one act actually," Wahba says coyly, "He's one of my favourites; we have Oliver Koletsky coming. I'm not gonna tell you when though…"

Before all this begins however, they're starting Sahel season with a bang with a massive Eid party. And though they're elusive about disclosing details, because well, they're just that damn cool and confident, Baky tells us "it’ll be a big bang. We’ve orchestrated the whole night from the minute the people arrive until the minute people leave." Considering the teams' track record, we don’t doubt it. They've seen everything from fights, to people trying to sneak into their parties through kitchen doors, to band riders that include "wet towels with mint and a jar of honey" to "this couple who apparently thought they were on the French Riviera at one of our parties – they were about to have sex," and they know what they're doing. "At the end of the day, people go for the best," Beltagy says simply.

Find out more about 6ix Degrees on the official Facebook page here.