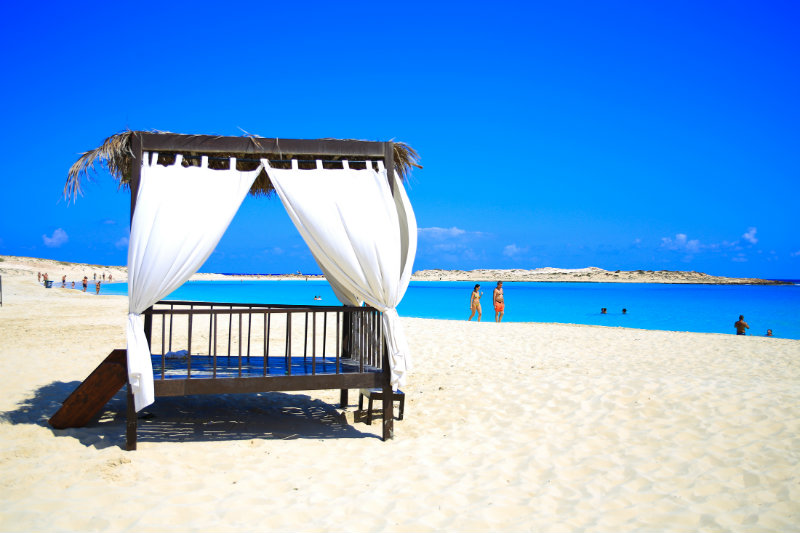 We took a little trip this weekend, making the drive up the coast past Sahel and to the watery wonderland that is Almaza Bay, 37 km east of Marsa Matrouh. Now Egypt has no shortage of beautiful beaches; you've got the stunning stillness of Sukhna's waters, the freakish blue of Sahel's, the magical world beneath the surface in Sharm's. Truth be told, as a country, we may be abysmal failures at everything else, but e7na mesaytareen when it comes to awesome beaches. Hey, we have to excel at something. But we swear on our grandmas, Almaza Bay's beach is literally like nothing you've ever seen before.

We'd seen the pictures of the resort and the bay and decided that no, this must be photoshopped/Instagram filtered (kids these days and their Instagram filters…); there are no beaches this blue and still and perfect, with the exception of that one in The Beach (and we all know how that turned out). Then we decided that we must visit this paradisiacal place to discover once and for all whether it was all a giant deception or not.

So we went ahead, driving up right before the weekend, and we might add, putting the poor car through a highway so riddled with potholes it runs like it was built by angry-four year olds. After a sufficiently bumpy ride, we finally arrived, and it turns out the bay has not one, not two, but five hotels, and each of them is equally gorgeous (we took a tour naturally, 'cause you don't travel for five hours and not take a tour).

Each of the hotels – all of which are a stone's throw away from each other and share the beach – has a certain décor theme. Oriental stays true to its name with massive lantern-like chandeliers adorning the lobby, while Crystal's lobby looks like what we imagine the French royal court in 1882 did. One of our friends was having a damn near nervous breakdown wondering how she could get her hands on the huge, violet chandeliers that literally couldn’t have screamed decadence louder if they tried. Our rooms were no exception; spacious and modern, they came with their own mini-rooms with overstuffed couches that we must say, will be the destination for future after-parties of ours (just a heads up Almaza Bay), and with beds that made us want to curl up and die inside the covers.

Next day we hit the beach, and that shit's real! It was like we got sucked into a screensaver on steroids. The water is literally a shade of turquoise so perfect it looks fake. And even though it's just one hour away from Sahel, unlike our unofficial national summering spot, Almaza's beach is completely devoid of Sahel's rape water – you know that water that ensures you're always battling with the waves and clinging to your swimsuit for dear life when you step into the sea. Almaza's beach has water so tranquil Buddha would be proud. And there are little lounges all along Almaza's beach with overstuffed white cushions where you just chill all day and sip on cocktails and pretend you're royalty. WE FOUND OUR HEAVEN!

And each of the hotels also boast huge – seriously, huge – pools. And keep in mind that these hotels could have gotten away with blow-up kiddie pools with the beach they’ve got, but yet they still had these insanely lavish pools. So you've got multiple swimming options.

If, unlike us, you are of the active variety of humans, that's okay too. The resort caters to the healthy, sportive types with a variety of water sports. You've got your hot trend of the moment, kitesurfing, you've got your chilled out (at least the way we do it) canoeing, and even water aerobics. Now, granted, that's an exercise usually reserved for old people, but done in the crystal waters at Almaza Bay, we totally wouldn't mind joining the geriatrics.

It might also be worth mentioning that the place is flooded with Italians – we might possibly have been the only Egyptian guests. Now this does lend something of a hotness factor to the place, because y'know, Italians duh, although we could have done without the plentiful speedos. Seriously guys, lemmo nafsoko.

Dinners were a stylish affair – we didn’t realise until the last day that the hotel requested smart-casual attire and that's why all the women were in heels while we looked like we were homeless beach dwellers in our flip-flops and cut-off shorts. But better than dinner were the hotels' various restaurants. Being the hungry hippos we are, naturally we made it a point to try out as many of them as we could, and we can say that very little in this world can beat an epic seafood lunch with that beach view, and a bottle (and by bottle we mean four) of wine. The sushi and teppanyaki dinner we had later at their Asian restaurant was a close second however. Though that might imply that the Lebanese restaurant didn’t deliver on the luscious front and we wouldn’t want that… Let's just say, whichever nation's food you're feeling in the mood for, the cuisine is all crazy good.

To sum up, if you don't head over there like, sharpish, you're missing out on a massively amazing beach, time, food, win, etc. Although on the other hand, we kind of feel like we discovered a hidden gem of a place that with our five-year-old it's MINE mentality, we're kind of reluctant to share with the rest of the population. But we'll count this as our good deed for the day.