Monica Gerges heard her fair share of ridiculous responses after telling people about her move to Cairo from Canada. Why did she do it, though? Only her many misadventures will tell. 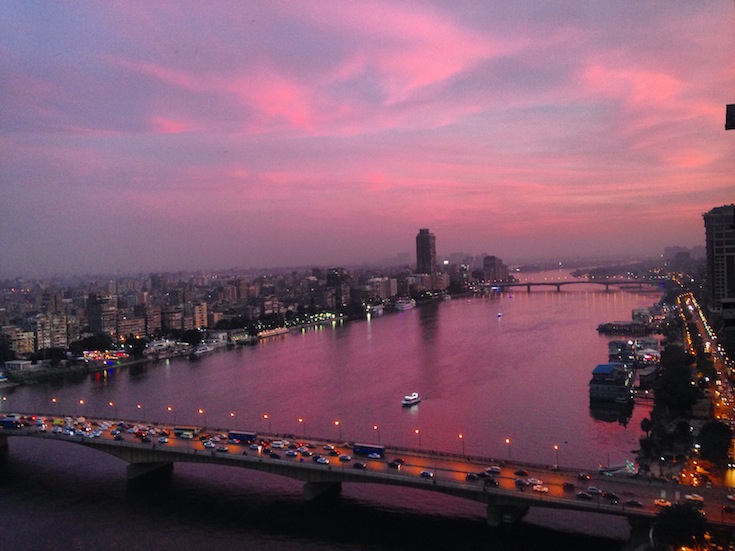 What the hell would compel someone to drop everything they know to be true in life, pack their bags, and hop on a one-way flight to Egypt without so much as a pla-? No, really, why would a girl leave the snowy luxuries of Canada and move to the brick-and-mortar jungles of Egypt? It's dirty and mekhalla3a; it's dangerous and unsafe; it's corrupt and you can't get anything done; people have no respect and they treat you like dirt – Egyptians abroad are clearly giving this country some shitty PR. In the words of a person baffled at the news of my move, "heya Canada maba2ash feeha shoghl?"

Always one for a little misadventure though, I hopped on a plane to the motherland and have, since then, managed to rack up some pretty amusing encounters; some days I wonder if I'm living my own version of The Truman Show, except I'm nowhere near as funny as Jim Carrey, nor could my adventures in Egypt ever be scripted. You just can't make this shit up. Returning to our question at hand: why would I leave the life I've known for 20 years and move here? I won't claim that Egypt is rainbows and butterflies - especially not after a mere couple of months living here, because apparently I ain't seen nothin' yet - but my humble twenty-something years of life have taught me that how you choose to view anything, no matter what it is, is entirely a matter of perspective.

Gad3ana - and any variation thereof - is probably my favourite word in colloquial Egyptian Arabic; of course, I've yet to find an English equivalent that matches the genuine-hearted, good-natured, selfless and dependable, near-chivalrous essence of the word gad3ana. It's something that, no matter where time takes this country, you can always find in the heart of its people. It's exactly what I found when I moved into the quaint little neighbourhood of Zamalek and met some of the people I'd be calling neighbours - from my loving-yet-overly-chatty bawab to the hilariously sweet dokkan owner, and all the people I've encountered along the way. The evening I moved in - less than 24 hours after I landed at CAI and less than 12 hours before starting a new job - I arrived at my building flustered and carrying far too many things at once - that is, after getting lost for half an hour through matahet el Zamalek and then not finding parking below the building. The man I eventually discovered would be my bawab - 3am Samir - helped me carry my things upstairs, repeatedly asking if I was going to a7alli bo2o. How can I a7alli bo2ak when we're both knee-deep in suitcases and giant fluffy pillows? It was only a matter of days before this man - by no doing of my own - saw something in me that made him consider me one of his daughters and treat me as such - one of his eight daughters, that is. Bless his little rabbit heart. 3am Samir chats with me almost every day on my way to and from work - regardless of how late or how exhausted I am – just to see how I'm doing; he doesn't have to, but there's something genuine and sincere about this man. Gada3. Most people don't seem to have that type of relationship with their bawabs - perhaps it's because I’m too teta to bring boys over, especially not if he's around. I often admit that I'm a teta, but I've discovered that I'm in large part my own teta – a genuinely friendly and social person who talks to everyone she comes across with an unmatched spirit of teeba. It seems that people of such friendliness - el nas el 3eshareya - have become somewhat a thing of el zaman el gameel amid Cairo's slowly expanding concrete jungles. "People around here don't even say hello or engage you in conversation," Saad - owner of the little dokkan in my building - told me one morning. Nearly every morning, Saad beysabba7 3alaya with "saba7 el fol wel ward wel yasmeen w kol 7aga 7elwa!" "Betgeeb minein el kalam el 7elw da kollo?" "Asl ana lama bashoofek bashoof kol 7aga 7elwa." A mawaal 3la rababa needs to play with every time I tell a story about Saad. It isn’t because he has questionable intentions; it’s because he found someone who says good morning and chats with him whenever they cross paths – a rarity, it seems. That particular morning, Saad seemed out of sorts as I walked in to pick up a few groceries. All I had to do was mention it and ask if he was okay - he began to share the tale of his disgruntled morning as he awoke to the news of a death. After venting his frustrations, he asked me where in Egypt I'm from. "Min el Daher." "3ashan keda,” he responded. “Dol el nas elly ye3rafo ma3na el geera w ahl el 7etta." He went on to share that he's from Bulaq, where an ‘all for one and one for all’ mentality dominates the streets and alleyways. But here, in Zamalek, people look down on him and treat him with a cold disregard, as though he's less than them for being a simple bayaa3. A few days later, I walked out of the building as Saad was carrying a head of cauliflower. Holding it out to me, he tells me to imagine that it's a bouquet of the finest white roses. Ya 3eini 3al dala3. Seeing as how there's no Costco or Walmart (or Tim Horton's) in Zamalek, I walked around with a wad of cash and bought my groceries from four different locations near my building. I discovered somewhat of a makhbaz where the scent of fresh 3eish balady caught my attention - and I, apparently, the attention of Hany the owner. After letting me taste a few of his fine creations - half of which I bought because I hadn't had breakfast yet - he asked me if I was new to the area because he hadn't seen me before. He then proceeded to ask which building I live in, which apartment, and if I live with my mother. I should probably note that Hany’s physical appearance is that of those men in their early 40s who still live with mama because they’re too je ne sais quoi to have gotten married. "Beteshtaghali eh? Fein? Tab msh metgaweza? Makhtooba? Mortabeta?" Last time I was interrogated like this was by a border patrol officer who barely spoke English at the US border on the way back from Vancouver. Eh ya Hany, fi eh 3al sob7? "So where's your mom? Why's she in Canada? Do you like Egypt? Are you planning to stay? You should stay." It took every fibre of my being not to drop my bag of 3eish fino and burst into a fit of laughter. Giving me his business card - on which he jotted his personal number - he concluded, "If you need anything agebhalek fe 2eedi on my way here, anything you like - konafa wala basboosa wala 2ay 7aga - just call me."

With such a hilarious encounter punctuating my many grocery errands, I walked off to my next destination assuming the day couldn’t get any more amusing. Yeah, 2om el donya wouldn’t let me off the hook. I ended up dropping some money, not realising it until I got home, and then retracing my steps until I found a stranger who had ballagh throughout the area that someone had dropped money and that he had held onto it until the rightful owner is found. Seriously? While I understand that life in Egypt isn’t always sunshine and lollipops, I can’t help but wonder why we disregard encounters like this and focus on the negative ones. Perhaps we need a shift in perspective, one where we don't let one bad apple ruin the entire batch. Returning to the question from which we began and which I'll spend a few weeks answering: why would a girl leave the snowy luxuries of Canada and move to the brick-and-mortar jungles of Egypt? The consensus has often been that life in Egypt is difficult, and that dealing with people on the streets of Egypt is a nightmare. Looking beyond the negativity, there are still some amazing people weh nas ged3aan who are often a gentle reminder of the goodness that continues to run through the people of this country. I know what you're thinking - but you're in Zamalek; that's different - but Zamalek is as much a part of Egypt as Sidi Gaber, Madinet Nasr, and Port Fouad. Perhaps it’s time to muster up the courage to be ged3aan ourselves and break out of the bubbles we’ve been creating between each other.