NFL Comes To Cairo As ENFL's Prepares For Season Opener

With the Egyptian National Football League preparing for its second season, CairoScene's Eihab Boraie catches up with coach and quarterback Moaz Sabah and learns that the NFL will be sending their American Football Without Barriers training program to Egypt at the beginning of March. 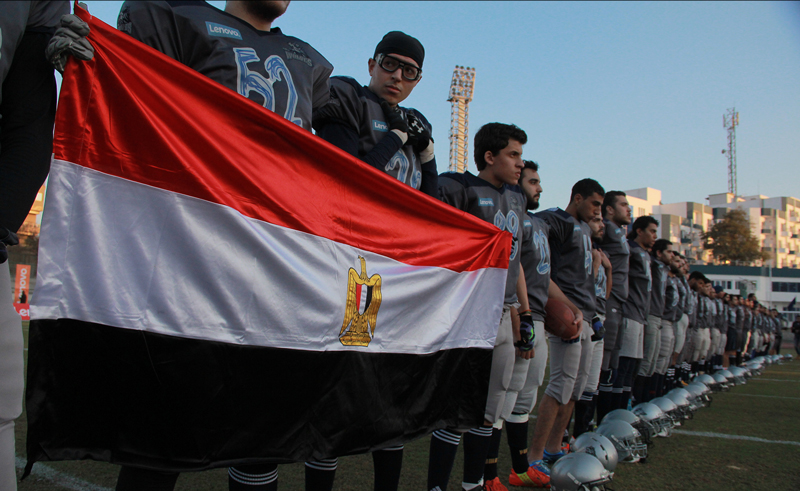 Against all odds, a community of athletes are on a mission to make American football flourish in a country that refuses to call it football. What seems on the surface to be an impossible task to achieve is actually being accomplished, and somehow entering its second official season. The Egyptian National Football League has even caught the attention of the NFL. Looking to learn more about the rising sport and the NFL’s American Football Without Barriers training program that is coming to Egypt, I spoke with coach and quarterback, Moaz Sabah of the Cairo Wolves. Americans are just as obsessed about their football as Egyptians are with the globally more popular ‘European’ version of the game. Growing up in North Virginia, Coach Sabah was no different, taking to American football at a young age. With the competitive sport incubating an astronomical number of talented players, Sabah, found himself being overlooked for college football. Unwilling to abandon his passion for the sport, Sabah decided that if he wasn’t able to compete as a player, he would train and become a coach. According to Coach Sabah, ”I played four years of high school football and, after graduation, I coached youth football for about two years. I was planning on coaching high school but I moved to Egypt before that happened.”

Arriving to Egypt in 2012, Coach Sabah was surprised to see that, in the land of Ultra Football fans, there was a small contingency of passionate American footballers trying to get a league started. ”Football was at a very rough place; there were about three teams (Cairo Sharks, GUC Eagles, and 6th Of October Rhinos), no equipment, and it was very hard to retain players because of the lack of equipment, lack of games, and lack of fields,. There wasn’t any organisation or league, so it was at a bad place when I first came here,” explains Coach Sabah.

The equipment required to protect players on the gridiron makes American football one of the most expensive sports to play; coupled with the fact that it’s impossible to find in Egypt, the equipment needs to be imported, making expensive gear even pricier. Overcoming this obstacle has been difficult; however, thanks to the passionate few, equipment-less pick-up games started to garner more interest. “After the non-equipment league tournament in 2012, everything kind of died down and there were no more games. We were down to about five players, but these five players continued to meet up and practice. Even if it was just throwing around the ball, we kept bringing one person from here, two people there, and kept growing until we were close to 20 people heading into the national game in 2014,” reminisces Coach Sabah about the leagues humble beginnings. Even in the face of a defeat, the national game would prove to be a turning point, as Coach Sabah explains. ”The first national game was in December 2014. It was a world cup qualifier against Morocco; unfortunately, we lost the game 26 for 6. However, around that time, we had a shipment of equipment for four or five teams, so that supplied us with enough equipment to play a very successful season last year and really boosted the popularity of the game,” believes Coach Sabah. With the arrival of equipment, last year marked the first proper league with five teams playing season games, and even an Egyptian Bowl and Pro ball, where the league’s All-Stars compete together. Each team would play one game against the other teams in the league, and the best two teams faced off in the first Egyptian Bowl, with the GUC Eagles coming out as the victors. This season, Coach Sabah has taken the post as the quarterback for the Cairo Wolves, and mentions that the league will expand by two teams, bringing the league total to seven teams, with a couple of universities looking to join the league. “This year we have the Cairo Hellhounds, a team based in Heliopolis, and the GUC Eagles who are the defending champions from last season; we also have the MSA Tigers and the AUC Titans who recently started, and Cairo Bears, a team based in Rehab, Transformer Warriors sponsored by the Transformer gym,” Coach Sabah proudly proclaims. Keeping the league's growth moderate is the lack of funding, as many of the teams rely on their players paying a membership fee in order to cover costs of equipment, fields, and training. The only exception is with the university teams, who already are equipped with fields and can cover a large amount of the cost. In order for the sport to truly develop, it will need even more universities and schools to get involved, which in turn will incubate stronger players that may one day be able to competitively challenge international teams. In December, the league started organising a couple of pre-season games, with the most notable being an international friendly between the Cairo Wolves and Jordan’s Amman Barracudas. According to Coach Sabah, ”We won 40 to 20, which was definitely a good step in international play and building up a little hype for the season. The season starts on the 26th of February and it will run until the end of April.” The season kicks-off just a week before the most exciting NFL news storms Egypt. No, the country isn’t gearing up to play Super Bowl champions the Denver Broncos, but, rather, 12 NFL players will be bringing American Football Without Barriers to Egypt to set up a special training clinic for players and coaches. Presented by the Egyptian Federation of American Football, this amazing opportunity will be taking place on March 2nd to the 5th at the German University football pitch. The training clinic is expected to drastically improve the level of game play for this season, and is easily the biggest NFL event to ever take place in Oum el Donia. The simple fact that they are coming is a testament to the growth of the sport in a short period of time. Just like everything good that happens in Egypt, there is already a division in the sport, as there is a different league attempting to do the same thing. Considering that the league is starved for talent and teams, this division is slowing down the progress of an exciting sport that needs all the players it can get.

For more information about Football in Cairo visit the Egyptian Federation of American Football, click here.