Racing in the Desert: Navigating Uncharted Territory in El Gouna

Jumping and bumping to sand dunes and rocky routes, 25 Egyptian racers defied the desert at El Gouna Rally 2016, which for the first time took the competition to the heart of unexplored territory. 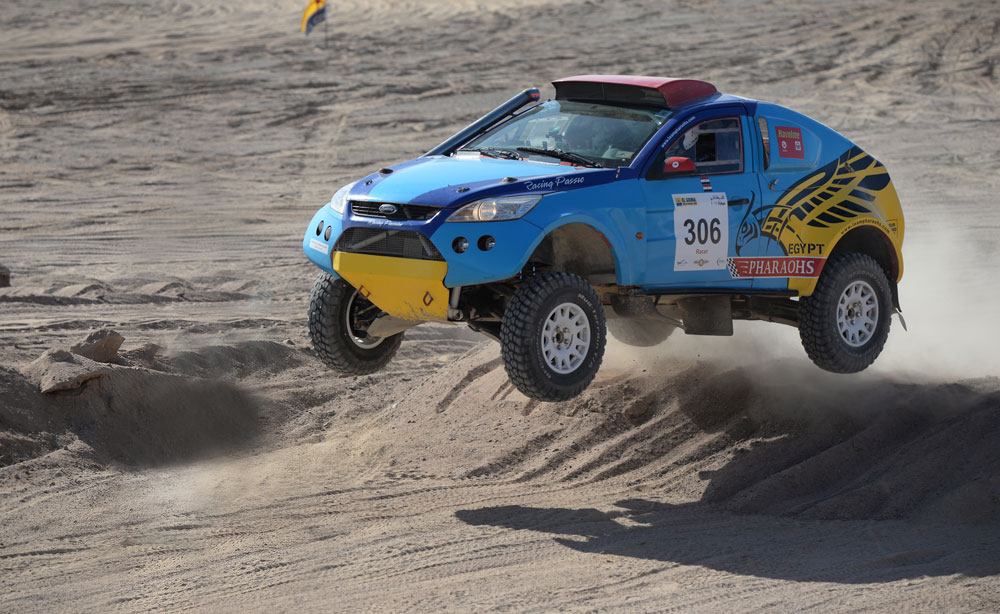 It was a season of many records for El Gouna Rally, which kicked off on April 15th. It was the first time the famous Egyptian race took the competition to the depths of the uncharted desert, and the first time an all-female rally team took part in an off-road rally race. There was a couple racing with no team other than themselves; a quirky racing car called Herbie; and Egypt's youngest racer, Karim El Galaly, all breaking boundaries to push a discipline that’s been making its mark in a country with too rich a geography to leave unmarked.

That was the spirit at El Gouna Rally, where 25 car racers met to compete in a two-day race that would take them from one of the most stunning Red Sea cities to the heart of the desert behind the Red Sea Mountains, where the intrepid pilots pushed their engines to the limit. Adding to the flurry of excitement, the GBI (Global Biking Initiative) Egypt team arrived, after having cycled the 370 km between Cairo and El Gouna in three days. A part of the Middle Eastern GBI Shine, the group cycles for different causes, taking on ambitious routes where 15 restless bikers pedal for over 100 km per day. The team spent the three days prior to the race cycling through Ain El Sokhna and Zaffarana, and after reaching their destination, continued to organise a fun ride inside the coastal city. GBI Egypt's bikers, who cycled all the way from Cairo in three days.

The first day was marked by the heat of some bumpy displays, a few penalties on the professional teams, and the intriguing promise of an uncharted mysterious path. As the second day began, racers departed at 6 AM, gearing up for an intriguing route in the depths of the desert, through the unpaved terrains of Valley Billy. But the route, which consisted of “way points” the drivers had to pass by through the navigation tool, proved more than challenging as the ride took them on a treasure hunt through the road book.

“It was a very challenging route,” says El Gouna Rally organiser Ahmed Sergany, as he shows us the final route outline that colourfully shows how teams got lost. “But it needs to be that way,” he points out. “Otherwise, the fastest car wins. We make it a point to make navigation difficult, so that only a good car and co-pilot will reach destination.” Contrastingly, the second stage abounded with penalties as several groups lost their way. “There were actually some surprises in the final results, because some groups got lost so they shifted positions,” explains Sergany, who designed the route himself four months before the rally began. One of them was Gazelle, the female racing team led by power-woman Yara Shallaby, which was inaugurating a new pilot in their attempt to put together the ambitious all-female racing team.

“My new co-pilot, Maud Buotros, was lost most of the time, which is why we were not ranked in the top three as the day before,” says Shallaby. “She is still new and just graduated from the rally school this year. We used to have very good experienced co-pilots, but I am giving this up for the sake of building a whole female team that I am dreaming for,” she explains. Her co-pilot Buotros, who stood out in the first stage and ranked first, lost her way in the confusing desert stage, leading the team to rank 6th in the overall position. “I’m a bit sad because if we didn't get lost we would have definitely been among the top three, yet I am investing in my new co-pilot and I believe in her, so hopefully she will catch up soon,” Shallaby concludes.

Crowned with first place overall was the orange-drenched duo behind Rahalla, Hany Omar and Hany Madbouly, who made their mark after 3:34 hours of navigating unpaved lands. “We had a lot of pressure because we had won the two previous rallies in Gouna, but it was the first time we started going out to the desert, so for us it’s a big triumph and a really good sign for Egypt´s racing scene,” Omar says. The power couple behind Caracal.

“The biggest surprise was navigating the road. It was really, really hard and many people got lost; but we were able to push it a little despite some mechanical problems with the car,” he adds. Their car, a magnificent buggy called Arabian Stallion, was the rally’s sensation, as it is the only vehicle entirely produced in Egypt. “In all disciplines in rallies, you usually buy parts from different parts across the world, but we are very proud to have built ours from scratch; everything is 100 per cent designed and built in Egypt,” he explains. “It was a very important step so that our team could fix it without needing help from abroad,” adds the 39-year-old racer. The Garage Team, which boasts a crowd of bikers, pilots, and bike-racers.

But perhaps one of the most surprising results was that of Caracal, the married couple who ventured into the valley without a supporting team or experience to back them. Yet, pilot Ramy Abbas won the third position in the rookie (amateur) category, and the duo reached the 6th position in the off-road route, ranking 8th in the overall results. “We are very excited because this is the first time we take part in a cross-country rally, and without a convoy. She did a great job; she was my eyes and my brains today. I was only driving the car,” says pilot Ramy Abbas.

“The hardest part,” adds his wife Rania El-Sayed with excitement, “is when you think you are losing the track, and you don’t know where you are, and you are trying to figure it out. You have to make a decision, you don’t know if it will be right or wrong until later, but you just make it.”