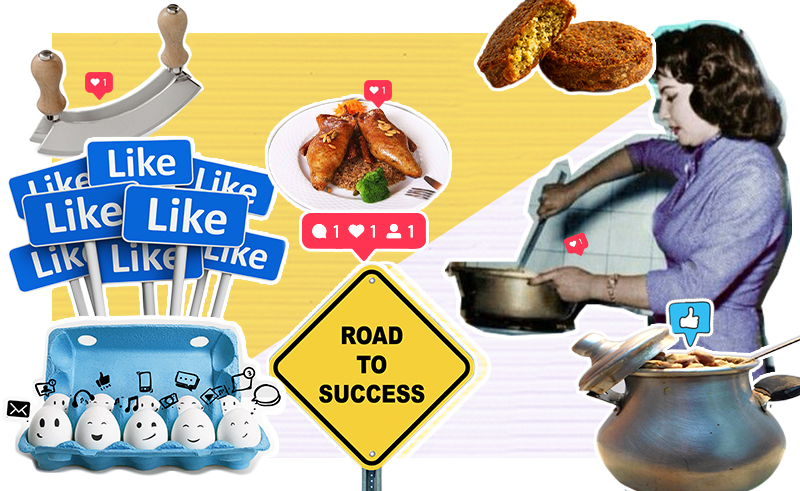 In the past few years, social media has become more than merely a pastime and surpassed traditional techniques in advertising, raising awareness and simply reaching people. While many can’t imagine a world without it, it’s easy to forget that it’s still very much a young marketing tool, although it has come to form its own rules of engagement.

Regardless of the nature of the work itself, the market power of social media has made success more attainable for smaller independent companies and talents that could otherwise have fallen through the cracks. By the same token, the bigger companies who’ve caught on to social media’s unlimited potential, go as far as pushing entire campaigns on Facebook and Instagram.

Today, Egyptian housewives are also reaching for a piece of the cake. With their full-time job being caring for their family and managing the household, some Egyptian women are using the power of social media to slip in successful careers amidst their busy schedules, despite challenges and rejections by those closest to them.

We talk to three of these women, namely Fayqa, Hend and Nora, and they reveal to us how internet 2.0 revived dreams they'd long given up on.

Fayqa, the archetypal mother and grandmother, is 45 years old and the women behind Lo2’met Too7a; a homegrown Egyptian food project. Like many women of her generation, she went from her parent’s home straight to her husband's, armed only with her good morals and a spatula.

“My mother’s the one who taught me to love cooking. It’s thanks to her that my dishes are made with passion and mazag,” explains Fayqa giddily. Ahmed, her son and a big fan of her cooking (especially the homemade desserts), was convinced that his mother’s food was too good not to be shared with the rest of Egypt. Being social media savvy, and noticing restaurants jumping on the trend of classic homemade Egyptian food, he convinced his reluctant mother to start a Facebook group, where she could sell her dishes.

Fayqa, not being well versed in the online world, was initially hesitant, but as soon as the group was formed (with her daughter managing it), everything changed for her and her family.

“In the beginning, I just thought to myself, okay I’ll give it a shot. I’ll probably only be getting meal orders from like one or two families at most. But then the number of orders kept increasing and I started panicking,” explains Fayqa.

Dubbing her family the reason behind Lo2met Too7a’s success, she describes how the whole family is involved in managing the ‘business’. When asked about the inspiration behind the name, she explains that Too7a was her mother, and that she passed away a month and a half ago. Fayqa wanted her mother and mentor to be involved in any kind of success pertaining to the project, if only by name.

“I know she’s happy looking down on us and smiling proudly at the work we’re doing and the success we’ve achieved,” she told us proudly.

Although the truism of Egyptian housewives wasting the best years of their lives in restricting family homes still rings true now, Fayqa takes an opposing view; in fact, she says it would never have happened without her family. Starting from her daughter, who runs the group, to her son who makes the deliveries (aside from his full time job), it’s very much a family business - one that her son and daughter want to eventually expand into a restaurant under the same name.

The situation in Fayqa’s house has changed dramatically since the start of this endeavor. No one asks the other to put down their phones anymore, because it has become their bread and butter.

If You Can’t Find a Babysitter, Be the Babysitter

Nora, 20 years Fayqa’s junior, credits her knowledge of social media, while limited, to her age. Nora’s project, which is a babysitting service, was born of the convenience that social media provides; something that eases the problem of having a three-year old daughter of her own. The idea came to her after seeing a post from a woman urgently asking for a baby-sitter to look after her kids for five hours, to which Nora offered to bring her daughter over and watch over both kids.

“Naturally, the woman was skeptical and didn’t understand who I was,” Nora explains. “So she said no. and it’s totally understandable.”

A few months later, having forgotten about the incident, Nora grew depressed and agitated from being cooped up at home. That’s when the woman from the post came to her mind and while she wasn’t completely convinced with babysitting gig as a job, she decided to give it a shot.

“At first I didn’t think it was really appropriate for me. I mean at the base, I’m an engineer. Did I go through all that studying and hard work to end up looking after other people’s kids? Then it was just like, okay I’ll just do this for now to kill time.”

Nora started modifying her house to be more child-friendly and even bought toys and coloring kits, transforming it into a mini-nursery of sorts. Initially opposed to her finding a job after she’d given birth, her husband seemed on board and helped her with the alterations.

Nora points out that for the first few months after starting her Facebook page, she’d only have two or three kids coming over. But then, with the help of a few of her friends sharing the page with other friends, and posting about it, the babysitting business took off. She also started getting the hang of Facebook and would post pictures of the kids.

"Parents love seeing pictures of their children having fun. And by posting them daily, they’d get to see how the kids were doing while they were sitting at work” Nora elaborates on what was a simple but shrewd way to promote herself further.

While she’s still not sure if she’d like to continue in this particular field, Nora finds that an online-based business has given her a lot and has solved her dilemma of wanting to stay home, yet also wanting to work.

“If I don’t work, I’ll be blamed for leaving my job and career and just being home all the time. And if I go to work in an office, people will say I’m not taking care of my daughter. Now I can work from home and my daughter is with me.” With social media, she concurs that she’s getting the best of both worlds.

Note: For personal reasons, Nora opted not to leave her business contact.

A Makeup Artist on the Rise

With Hend, the situation was completely different than that of Nora and Fayqa, in that she had the option to work outside the home, even after giving birth. However, she decided not to. She was still unhappy with her decision, though.

“Sometimes you get worried about what people would say. Like if I don’t work, it automatically means I’m backwards and not a feminist. But after I gave birth, I thought about it and decided that I wouldn’t have the energy for my daughter after a 10-hour workday,” states Nora.

Having worked for five years and establishing herself in the field of business management, the turning point for Nora came when she was diagnosed with depression. Not knowing what to choose and whether or not to work was making her anxious. And those around her just didn’t get. As is usual with depression, Nora couldn’t care well for her daughter and was constantly feeling down.

That’s when her husband and his friends decided to step in, encouraging her to take advantage of her love of make-up and to start-up some kind of business of through a Facebook page.

“Honestly, in the beginning I disregarded it as a joke,” she explains.” And I created the Facebook page more as a challenge than as anything serious.”

Eventually, however, she woke up one day to find several notifications from the page, which she didn’t even remember creating. The notifications were increasing and, for about a month, she wasn’t responding to any of the likes or the comments. She explains that with every message, a small light bulb would go on in her head and eventually she decided to give the online makeup business a shot. With pictures being uploaded and likes and mentions increasing, so did her momentum. Eventually, she gathered a solid roster of clients who would visit her in her home to have their makeup done.

“My prices are considered cheap compared to other places and my only request is that they come to my house to do the makeup.”

After a year of building her online endeavor, Hend decided that she wanted to step things up and be more than just an amateur makeup artist.

“I’m going to travel to Lebanon to take courses in makeup; I don’t want this to just be a hobby or just a way to kill time.