Cookies, watercolour, neon lights and cardboard can apparently be used as art supplies. 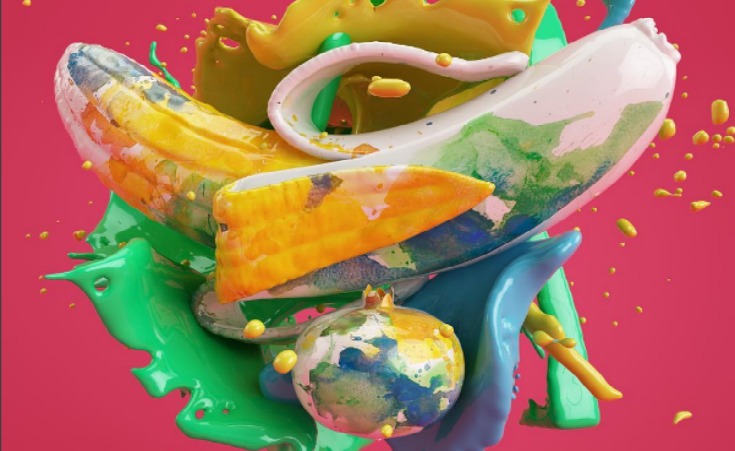 We carry universes inside our heads.

Universes being universes, they are rarely organized, orthodox, or even familiar. Especially not in our current hectic century. Artists, the carriers of the most vivid of universes have always sought to expose whatever goes on in their heads to the outside world; to the bewildered onlooker who is eager to experience this human exchange in the form of art.

And though we are used to certain themes, certain styles, certain illustrations and statements in this postmodern world, artists from all over have been challenging this predictable orthodoxy in their mixed media visual works.

We list below some of the most Instagram-famous Egyptian artists so that our eyes open to new universes that move beyond the classical and traditional, both of which have become so alien in our twenty-first century. Besides being a fantastic illustrator with crazy attention to detail, Mostafa Abdel Mawla makes use of small everyday objects like light bulbs and seashells to create stunning visual paintings. Abdel Mawla’s sci-fi, out-worldly digital illustrations and cardboard sculptures also reflect his visual genius. The artist’s work raises our eyebrows over the realization that such mundane objects can be visualized and transformed into striking aesthetic pieces. Taking pop culture photography to a whole new level, Hazem Ragheb’s rich and layered content makes for arresting photographic art that floods our eyes and minds with implied visuals of the fickle modern world. A bright pink upside-down sea, disturbing shower box tiles, or a blurred red window are only some of the visual tastes the artist seems to covertly throw our way. (But we’re not complaining) For some reason, the word ‘perfection’ somehow comes to mind when viewing any of Ahmad Abi’s works, despite the term being rarely used in the description of visual works, or any artistic works for that matter. Still, along with Abi’s bright yellow signature ducks are vast, perfectly-toned and mixed spaces of bright colours, perfectly cut clouds, perfectly placed socks and perfectly shimmering balloons that are quickly picked up by our wandering and (relieved) eyes. As an artist who has participated in the #ar_challenge, Abi’s works are definitely worthy of us browsing through with inexplicable smiles on our faces. Flying watermelon slices, curved streets, and calligraphically-shaped neon lights, Moataz El Sayed is surely turning art on its head. Combining kitchen tools and other everyday objects together into a surreal setting, El Sayed’s artwork is anything but traditional.

A MO4 office sweat heart, Noha Bahr, who was officially featured twice on Instagram for her gorgeous stop-motion illustrations, surely tops this list. With flowers and delicate watercolour illustrations of the adventures of a tall, confused ducky, Bahr’s illustrations infuse our Instagram feed with a warm and cozy feel. Dina Bahr spreads colourful vibes down our Instagram feed with her adorable illustrations that contain actual food items like cookies and dates. So, aside from getting us hungry every morning, Bahr is able to utilize everyday resources (Oreos and coloured pencils) to create endearing pieces of art. With an apparent fancy for patterns and collages, Soliman’s mixed media pieces give a feel of ambient psychedelic surrealism. This is especially owing to his choice of colours and Andy Warhol style collages. Miniature toys and hilarious distinctly-Egyptian microbus badges have also somehow found themselves in Soliman’s mixed media. Egyptian 17-year old Omar Bakry is definitely reshaping the art of visual minimalism in Egypt using cartoon characters like Spongebob and the Minions. Bright background colours and perfectly-polished and placed items are characteristic of the young artist’s style who uses toys, fruits, and other everyday objects we always see lying around in order to create a visual story. The adolescent artist is one of many proofs that you don’t need equipment to create kickass art, only a vivid imagination. If there is something Cairo is never short of, it’s the vintage settings, the charm of its places and the illusiveness of a rare kind of magic wandering through its buildings and corridors. Ali Al Masry must have picked up on that as his visual works effortlessly reveal it to us. Al Masry infuses his stunning photographs with calligraphic writings that snake through the open and closed spaces of the city, confusing the mind and the eyes. The artist’s manipulation of visual aesthetics definitely redefines the way we see mixed media.

Animated women blinking or staring stealthily at you with meteors showering in the background is Ganna Hesham’s kind of scene. Aside from being a digital illustrator, Hesham works with watercolour in painting an abstract reality of Cairo’s buildings and architectural gems. Gasping masks, forest trees, and Frida Kahlo are only some of the items Hesham gracefully illustrates. Mixed media artist Ahmed Bedoo redefines shapes and patterns in his visual works so creatively that we feel at certain points that we’ve suddenly lost touch with orthodox perception and are instead witnessing the mutation of visible reality. Curved neon lights topping a vast number of eggs and a banana created with layers and layers of splashed paint certainly give this impression. Another fantastic merger of photography and other media is artist Emy Elina. Creating visual pop-art masterpieces is something that definitely characterizes the artist who utilizes elements such as calligraphy, digital reproductions, and different genres of photography. Elian shows how mixed media sometimes serves as the medium to reflect what is the best of every world.

We’re not sure if Oreos are now a thing among Egyptian mixed media artists, but from the looks of it, it seems that there is a certain magic that we’re missing in those delicious snacks. Hani Magdy, another mixed media artist uses Oreos to make lovely stop motion pictures as well as digital artworks and illustrations. Magdy is one of the must-see artists who’ve participated in the art challenge that’s taken the Middle East art scene by storm.

What&#39;s inside my circuit breaker? 👀 A day in a lil&#39;s life! 👧🏻🐶🚗👖🌿 I need name suggestions!! 🙌🏼 Can you believe all this was inside! 😮 #tinkerfriday #whphiddenbeauty Song: All Night by @parovstelarofficial

We may have disassembled fans and our brother’s Toy Story talking Woody talking as kids, but artist Dina Amin takes this to a whole new level. Give her a door lock and a bobby pin and Amin will create a stunning stop motion video that tells a story. Too easy? How about a USB-turned-salon chair with two characters made of the USB’s insides? Yeah, we thought so too. If you wish to get anywhere near familiar with the fantastic and changing mixed media scene of Cairo, you need to get familiar with Amin.

We carry universes inside our heads.

And sometimes those universes are haphazard, mobile, random, and explosive. But that’s all right. Thanks to the wonderful artists everywhere, those universes in our heads are constantly being turned into artworks acting as contemporary artifacts authentically reflecting the feel and organic-ness of the century.