The 2nd edition of Hiya Live Sessions themed ‘Ghazal: Neo Mystics’ is a global series of events exploring futurism & mystical radicalism with a lineup of Womxn artists from the SWANA region & beyond. 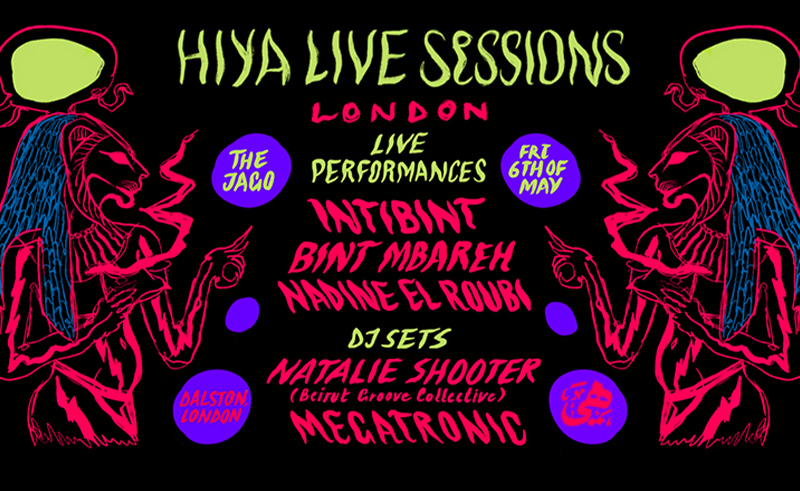 Launching in May 2022 in London and Brooklyn, with events in Cairo and Beirut later in the year, the second edition of Hiya Live Sessions themed ‘Ghazal: Neo Mystics’ is a global series of concerts and clubnights exploring futurism and mystical radicalism with a lineup of Womxn artists from the SWANA region and beyond.

Hiya Live Sessions celebrates radical womxn artists, DJs and poets on the front lines of sonic and rhythmic experimentation. During the pandemic in 2020, Hiya put on their first edition of the movement - a challenging feat in and of itself, let alone doing so in the digital sphere, proving its ability to adapt with the multidimensional spheres of the physical – thus cementing their place as culture curators keen to shift the status quo.

Now, in 2022, the movement is returning with its second edition Ghazal: Neo-Mystics with a multi-city programme of concerts and clubnights, connecting underground movements in the SWANA region, diaspora communities and around the world.

Kicking off in May in London and Brooklyn, Hiya Live Sessions runs throughout the summer with a programme that features performances from mrudangam artist Rajna Swaminathan and vocalist Ganavya Doraiswamy, who will showcase their new joint album; Iranian composers Niloufar Nourbakhsh and Bahar Royai, artist and musician Farah Al Qasimi, Syrian-American Rock experimentalist Boshra al Saadi, Yemeni-British singer Intibint, Sri-Lankan born Dj Ushka, Dubai-based DJ and Femme Fest founder Megatronic, experimental DJ and producer DJ Haram, Palestinian musician and performer Bint Mbareh, among many others. Joining the London line up is the Cairo-based Sudanese-Egyptian-Iranian neo-soul and hip hop artist Nadine El Roubi. Their first event will be held on May 6th at the Jago Dalston in London.

Hiya Live Session shared a note with SceneNoise on the creative concept behind this year’s edition:
In The Arab Apocalypse (1980), the late Lebanese-American poet Etel Adnan created a post-modern reflection on violence and chaos, employing cosmic imagery to connect movements of protest, destruction, feminist and Queer emancipation around the world. Now, in the tragic wake of failed states and revolutions, a new wave of solidarity has risen from resistance movements fighting patriarchal and colonial systems. A renewed aesthetic of futurism is rising as artists process chaos and trauma into transformative narratives, exploring ancestral traditions - from Sufi poetry and spirituality to mythology, maqam and percussive rituals - with bold new interpretations ranging from Free Jazz to Techno.

Our second edition of Hiya, ‘Ghazal’, is inspired by these alchemies and their ancient poetic legacies. The ghazal is a form of music and poetry that originated in the Arabic-speaking world in the 8th century, later traveling to South Asia and Iran. Its verses ruminate around loss, separation and longing, the beauty of love, mortal and divine. Hiya 2.0 celebrates interconnected expressions and trance practices, activating a magical space for resistance, healing, community, reckoning, rage, ecstasy, and liberation.