Battle of the Bands Round 1: Hassan Ramzi vs. Code Masr vs. Irtjal

Before they take center stage and potentially ascend to stratospheric levels of stardom after this weekend's first round of the battle, we uncover more about three contestants' stories, and how Battle of the Bands changed their lives. 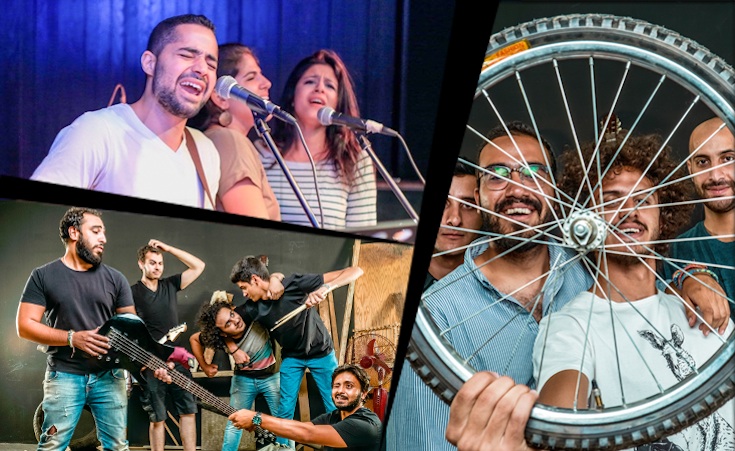 Battle of the Bands dusted off every corner in every city and every town to discover and uncover musical talents from every genre, and every background. Since we can't even pull off having a nice voice in a simple Whatsapp voice note, we decided not to apply – also, they say people have to really like you to win. While the bands get ready to compete for the title of the 'best band', we're here rededicating our energies to being groupies. The three finalists are taking off to the combat zone this Friday, at Dunes Beach, Marina 5, Sahel, featuring the now-old-and-established Salalem band. It's now the season of guys singing their way to championship, instead of kicking a ball around. Since we've included you with us in knowing when it was going to happen, and we've updated you when their truck studio was going across the country, and we've told you when 12 finalists were to be chosen, we're about to introduce you to the selected bands battling it out this week: Hassan Ramzy is loved by many and known by plenty, but his experience with his band on Battle of the Bands was something else. He creates magic with his band member, Khaled Agate the bassist, Mohammed Sarra the drummer, Ahmed Shabana the oud player, and Michael Yehya the lead guitarist. Ramzy met Khaled Agate a long time ago, "We would always create music, and even play acoustic shows together – our friendship and band partnership goes deep." When the band came about recently, and the competition ads surfaced, they decided to submit a video for their application – he says they were confident they'd get a call back. Of course, their confidence was not crushed, because they were called, they were in, and they were ecstatic. Ramzy says he believes Battle of the Bands will provide a platform for upcoming artists, to do what he loves to do with music: inspire. He says, "Music is an inspiration felt by everyone and everything in life." Guys in their twenties usually opt for the option of being in rock bands for fame and groupies – but not Code Masr who infuse lively music that speaks about their condition and reflects their identity-driven name. They met each other through Egypt's underground blossoming season for all that's musical and revolutionary artsy in 2011. Since they've met and formed, there were some changes in members, but also changes and developments in their musical style, as well as seeking to meet the right people who can help them professionally. Undoubtedly, they told us that "Participating in Battle of the Bands, was part of our professional growth – seeking dedicated and passionate people who want to organise and sponsor young musicians and provide them with exposure and outreach to more audience." At the end, they say that with all this technical stuff that comes with being in a band, making music is what makes them feel happy, because it is the greatest form of self-expression. With a name like Irtjal (meaning improvisation, or freestyle), you know that Mohamed 'Mamo' Ashraf, 23, Noureldeen, 22, Ali Khattab, 23, and Hashem Raafat, 24, must be a heck of an articulate group of guys. The four musicians met at an international student organisation called ISLC, and later, two of the members started jamming and making music together. When they decided to up their game and go to a studio, they improvised their way through a jam session, and that's where the name came from: Irtjal. Not only is it the name of the band, but also the title of the first song that they improvised during their first concert. The reason they chose to participate in Battle of the Bands is quite simple, actually: a sponsored ad caught their eye, and they signed up. But, they didn't let us go with a story that basic. So, here's the gossip: apparently, "Noureldeen was just on his bike, and he called us and to tell us that his life that's falling apart – and that the only thing that would keep it together is having music as an integral part of his life," says Khattab – so, we're guessing they signed up to save their buddy from misery.

They filmed a video in their studio session as part of their application, and admittedly, it was really bad – so, they didn't expect to hear back. When they heard that the studio truck was coming to Rehab City, they followed it around like stalkers they hope to have one day after their success, but with a car packed with instruments. Of course, that plan only succeeds in Hollywood, and since we're in Cairo, they just gave up. But, they called them! And though they thought it was a prank at first, they actually were given the good news of making it to the top 40.

Irtjal believe that Egypt's music scene doesn't generate new artists as much as it should, considering the political and social changes we're living day in and day out. They compare the phenomena of emerging talents with Lebanon, Jordan, and Morocco, "There are bands such as Jadal and Mashrou' Leila, who sing songs full of expression, straight from the heart – and that's where you find the essence of culture. But in Egypt, there are evident forms of repression when it comes to manifesting emotions and feelings, and no way of channelling that energy out. And that's when Battle of the Bands comes in." They call the competition "a glorious opportunity for emerging bands and artists," and an even greater chance for discovering talents and shedding light on their artistry, instead of sinking into the background, and becoming just another corporate slave. That is one dark thought, but, we get the point. As for their stardom, they say their life hasn't changed – we say that's good news - and that they still have koshari, which is the meal they have when they are spewing a master plan on how to win Battle of the Bands.

You can find out more about the event here.