The Rebirth of Egypt's Metal Scene

Since the mass metalhead arrests in 1997, Egypt's Metal scene is still surviving and the stars are aligning for a genuine resurgence of the genre. 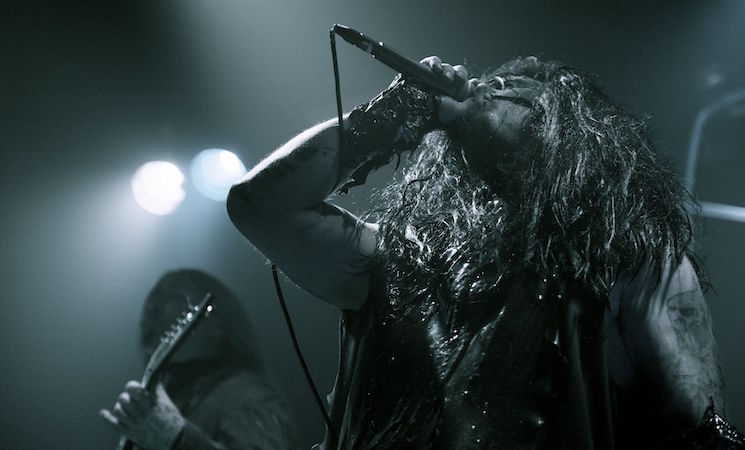 The one thing that is true about Metal is that it will never truly die. Once the hard riffing thunder of bands like Black Sabbath and Led Zeppelin was heard around the world, there was no putting the Jinn back in the bottle. Simultaneously a global fraternal community, transcending income and upbringing, and a fiercely divisive clique, rife with elitism and misogyny. Imagine Mean Girls, but a bunch of long haired, bearded dudes threatening to punch each other in the face over the finer details of the first wave of Scandinavian Black Metal.
In parts of the world, like Egypt, with histories of oppression and superstition, no matter how hard authorities try to stamp out the raging nonconformists, they only drive it further underground. Since the mass arrest and torture of nearly 100 metal heads back in 1997, it’s been difficult for the musicians and fans of the Egyptian metal scene to rebound. Things are changing however, and this year will see multiple international metal bands taking stages in the country. Seeking to rival the festivals and big shows that take place elsewhere in the region, Egypt’s metalheads are intent on making the land of the Pharaohs a haven for the MENA Metal scene.
In celebration, I’ve collected here the finest examples of Egyptian shredders, monsters, and dudes who make animal noises into microphones. They showcase the diverse styles blended with original elements that all your friends are going to say sound exactly the same before asking ‘how can you listen to that, it just sounds like he’s burping?'
Odious
This two-piece from Alexandria is the definition of epic. Sweeping orchestration, and some really well done ‘opera’ type vocals give these guys a Fleshgod Apocalypse, Septic Flesh kind of vibe. The oriental instrumentations and melodies give the tracks a distinctly Egyptian sound that do much to differentiate them from merely a solid band into something really badass. Check out their record Skin Age
Al Azif
A rad set of guys playing some weighty melodic metal that could actually make you feel feelings and well as rip your face off. Kick ass vocals and riffs that are great exercise for those head banging muscles. Go ahead and listen to Cull The Meek and lie to me when you say you're not humming it the rest of the day. Heard that they might have a pretty sweet gig lined up.
Anarchy
Prog Metal is tough to pull off. Just finding a vocalist who can do screamy gurgling stuff and actually hold a tune is damn near impossible in even the best of circumstances. Then, keeping a group that understands what time changes are and can play in odd meters is even tougher. These guys have a pretty cool thing going on. They put out a single called Asylum.
Brutus

These dudes have been around since 2007 and have recently broken up. Attesting to the diversity of the scene here, the fact that a band that sounds like this even formed to begin with is pretty impressive. But the fact that they wrote riffs heavier than your mom make them an Egyptian cultural treasure.
Crescent
Just in case you thought blackened was reserved for Cajun food, Crescent deliver a blackened Death Metal assault, similar to Behemoth. Blast beats, and ripping guitars from a band out of Egypt? I would have never believed it myself but these guys shred so hard I almost broke my desk from trying keep up while air drumming. They put out a record called Pyramid Slaves not long ago. It rules.
Enraged
Another Egyptian Metal act that’s been around basically forever. Since 2005 these dudes (which I believe is a non-gender specific term) have been keeping the Metal faith alive. With a female singer who totally freaking nails it, wicked solos, tremendous drumming, and some cool keyboard stuff, no one would ever believe they come from Egypt. They had a record called Jahr not that long ago.
Frostagrath
You’ve got to be kidding me. If you had told me yesterday that I would be writing about a sick depressive Black Metal solo project from Cairo, I would have told you to shut your lying mouth and let me get back to work writing FancyPants articles. This guy is sad and pissed and nihilistic as all hell. Hey that was a pun! Get it, Black Metal, hell? Dude needs to press some vinyl so I can impress all my record collecting friends when they come over.
Perpetual Ferocity
This band is Brutal. With a capital B. Frantic and exceptionally well executed, these dudes must smash glass cat figurines and snort them. Their album The Darkness Under The Sun should be blared in the middle of Cairo traffic and the CairoScene office.
Nader Sadek: In The Flesh
Known as the Egyptian Death Metal Michael Jackson, Nader is one man who is constantly surrounding himself with the biggest names in the global extreme music scene, to the most prodigious effect. Theatrical, thematic and nightmare scary, this project is one of Egypt’s greatest cultural exports. Putting Egypt on the map for aural extremophiles the world over.
Main image of Nader Sadek, retrieved from his Facebook page.