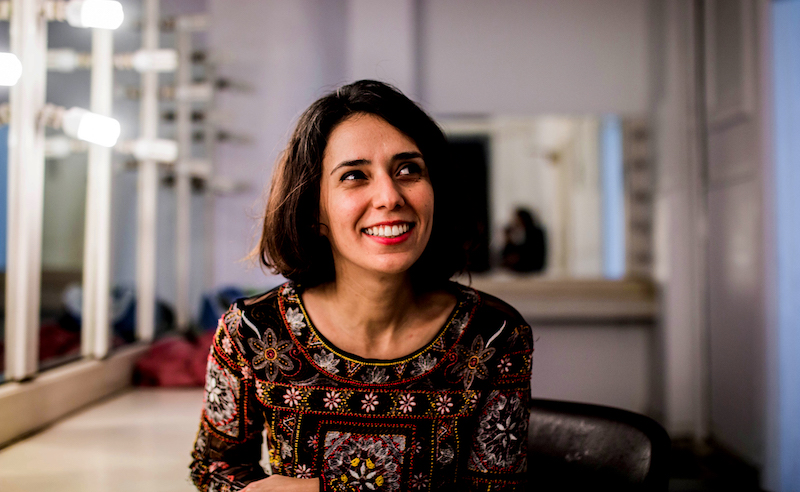 Cairo’s accordion playing darling Youssra El Hawary has just made her grand comeback, reentering the Cairo music scene with a well-composed and energetic new album, No’oum Nasyeen. Beyond being an accordionist, Youssra is a singer, songwriter, composer and actress.

As a child in Kuwait, Youssra began to play piano, and after returning to Egypt she began to study music at the Cairo Music Centre. Later, she attended the Faculty of Fine Arts, earning a degree in cinema design and theatre. Following this, she performed with Salam Yousry’s El-Tamye theatre troupe, later touring the Arab world with him and The Choir Project. Youssra’s foray into her own musical world began in 2011, with the upload of some of her songs to SoundCloud, followed by her first performance in 2012. Though she was steadily gaining an audience with her narrative songs about her personal life and political perspective in Cairo, the release of her first music video “El Soor,” showing Youssra in the early morning playing along the cumbersome and prohibitive Cairo walls, pushed her career to the next level. The video won her the anti-corruption themed Fair Play International Music Award and an invitation to perform in Brazil.

Youssra, who was a self-taught accordion player, decided she wanted to take her craft to the next level and study professionally. So naturally, she went to France. But not just anywhere in France: Youssra spent two years studying at the renowned National and International Centre of Music and Accordion, receiving a grant from the French Cultural Institute that funded her study.A long time coming, Youssra’s debut album No'oum Nasyeen shows a labor of love and attention to dynamics and detail. It is immaculately orchestrated and textured, drawing the listener into a quirky and whimsical world, reminiscent of a soundtrack for an Egyptian version of a Jean-Pierre Jeunet film.

We recently wrote about the release of the sleek single off the album, “Bes Kollo Yehoon,” which was a treat to lead us into the rest of No'oum Nasyeen, an album that merges elements of French accordion music, chanteuse, blues, funk, Brazilian forro, zydeco, and Arabic parlor tunes.

One of the major highlights on the album is “Wana Mashi,” a quirky track that begins with Youssra crooning over an eerie organ, before a harmonica leads us into a cadenced mood change, mandolin and violin sweeping in propelled by a rolling drum kit. “Kashkouly” is a percussive, lush track illuminated by a lilting recorder floating over and intertwining with everything.“Sallem 3ala al beit” is one of the only tracks on the album with an oriental feel, starting off with a tabla groove and a spunky Arabic accordion line bouncing over it. It fills out with zills and piano, coming together beautifully, bringing to mind a smokey rococo bordello in French occupied Cairo. It is an instrumental track, showing off Youssra’s accordion prowess.

“Mafeesh Amar” is the and most funky and bluesy track on the album, highlighting suave Farfisa-like organ chords, harmonica and seductive guitar.Her live performance showcased a vast array of instruments including guitar, bass, recorder, harmonica, keyboard, three relatives of the mandolin, drum kit, and a full percussion section including bongos and tabla. Last, and obviously not least, Youssra gracefully wielded her accordion, front and center. The vibe of the show was intimate and warm. The setting of the stage portrayed a cozy, festive living room, and often went dark, accentuating the loops of string lights above the band. Youssra has a devoted fan base, who were wholeheartedly engaged throughout the show, laughing with her, singing and clapping along to almost every song. Youssra was somewhat nervous, though in a charming way that added to the homey vibe.Despite some technical issues, the live performance immaculately captured Youssra’s music. Her album translates perfectly to the stage, a feat that is often not achieved even by accomplished musicians. Her band was noticeably tight, and the performance highlighted the thematic element of her music. If you missed this performance, worry not. Youssra El Hawary and her talented band will be performing tomorrow, December 19th, at Cairo Jazz Club.