A controversial Israeli actress turns heads and stomachs by performing "as" the Holocaust, shouting that Jews should thank her... 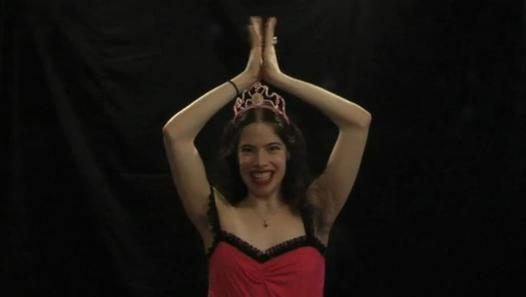 A Fiesty Israeli actress has sparked outrage in the Zionist state by performing as the Holocaust at the country's memorial to the World War II tragedy. That's right, Natali Cohen Vaxberg decided to play the role of the Holocaust itself and took her controversial stunt to the monument, designed to commemorate the massacre of six million Jews by Germany.

In the stunt, she shouts at passersby: "I am the Holocaust, the best thing that ever happened to you. After all of these years, I deserve a round of applause!" in a bitter reference to the creation of the Jewish state.

She goes on: "How could you justify 1948 and 1967 without me? Who deserves credit for enabling you to place 3 million people in a ghetto without the superpowers bombing you? Do you think you could get on without me?"

However, the controversial starlet's mood changes when she is attacked by museum visitors shocked by the distasteful outburst.She then lashes out at distressed onlookers: "Has Frankenstein taken revenge on his creator? Where did you learn this from? The bigger you grew, the more your memory shrinks. Where did you learn to gather people into concentration camps on the basis of their ethnic background? I am your truth!”

The seven-minute video is supposedly designed to highlight the injustices of Israel - but the move has drawn ire from many who see the film as little more than an attention seeking stunt.