From fixing motors, to protecting men, to flashing red and yellow cards, these Egyptian women refuse to let anything hold them back. 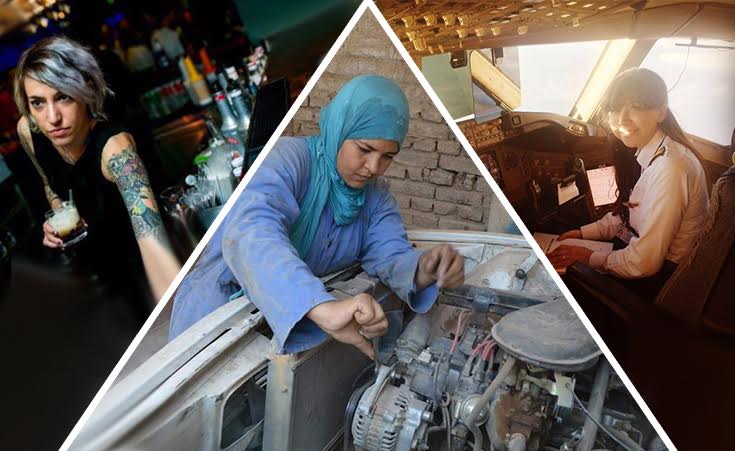 Society in Egypt has always expected a lot from women but not in the right ways; a century ago, society expected women to not get an education, dedicate their lives to housework in service of their families, and never peak out of the window with an uncovered face. 50 years later, women mostly dressed as they pleased and were permitted to work in careers that society viewed as suitable for them (nurses, public employees, domestic labour etc). From that point on, and due to the rising numbers in female literacy and education, women ventured into fields that have traditionally been inaccessible to them. More Egyptian women started becoming engineers, doctors, and scientists. Refusing to stop there, some brave women continued on the struggle by taking it one step further and pioneering fields that are still largely closed off to them in the 21st century by a myriad of social norms and religious limitations. Here's a list of exceptional Egyptian women setting trends and breaking cultural taboos by venturing in the world of men, armed with knowledge and a self-sense of empowerment that defies gender roles and societal norms. Because of pilots' commitment to long flying hours and need for availability at all times, Egyptian women have typically stayed away from leading careers in the aviation industry. Spending that much time away from home and family has been socially unacceptable for Egyptians that expect their daughters to be home before midnight, let alone spend multiple days away from home. The industry hasn't been completely void of female participation though. In fact, Egyptian women are way ahead of females of other nationalities when it comes to aviation. Just recently, Magda Malek, was named as the first Egyptian female to pilot EgyptAir's largest airplane, which she considers a great honour but also admits that she has barely faced any hardships for being a female pilot. According to Magda, the industry she's in luckily pays no attention to gender, shifting focus on eligibility and qualifications instead. Such an environment helped Malek excel in her career, "In 2008, I was the first woman to graduate from EgyptAir's academy in more than a decade. Now we are 12 female pilots out of 1200 pilots in EgyptAir. I used to get joked with a lot about being a women in the field but nothing was ever discriminative and when it came to work, I was always treated fairly and equally." In Egypt, men naturally assume that anything that has to do with driving cars is far beyond a woman's understanding, let alone fixing them. Phrases like "of course it's a woman" when spotting a bad driver, and "women shouldn't drive," are casual daily conversations everywhere in Egypt. That's why Liqa' El Khouly, an Egyptian female mechanic, had to prove herself in a world where women are considered dramatically incompetent, standing strong in the face of criticism with the support of her family. "People would tell me ‘you’re a girl, you can’t lie under a car’, ‘you shouldn’t work’, ‘you deal with too many men’,” Khouly tells us. “A lot of women want to do what I do for a living but can’t because their parents won’t let them.” Standing behind bars, shaking mixers, and perfecting cocktails is not what women in Egypt are expected to do at bars. Standing there looking pretty while sipping on their cosmopolitans is more like it - or not frequenting bars whatsoever. Perry Moataz, however, purposely ignored that invisible barrier three years ago by stepping behind the bar to pursue her passion of mixing drinks and making people happy. Moataz admits that people found it weird at first that she was an Egyptian female bartender, but as more women got hired in the city's nightlife industry, people are finally getting used to it. "I like to work with my hands and I like to make drinks and make people happy. I didn't think anything was wrong with it. Being a girl in the nightlife field is very tricky; you could easily get a lot of unwanted attention, which is an issue I've come to believe I'm handling well by being firm, professional, yet friendly. In the last couple of years, I've gotten more and more comfortable doing what I do, which is great." "Short of brains and faith" is a saying used by religiously conservative Egyptians to make an argument for women's lack of ability to form well-structured judgments. The backward statement was blown to pieces by Sarah Samir, who is the first ever Egyptian woman to supervise a men's league game. The position she holds, which is unquestionably viewed by many as an intrusion into a man's game, requires firm handedness and precision, qualities society doesn't usually attribute to women. But it was her turn to brush those non-believers aside and also sometimes flash them with yellow and red cards if they have a problem with it. "I faced no difficulty in refereeing the game despite some shock by players and attendees before the whistle blew and the game commenced," Samir said to TV Program, Sports Hour, after officiating her first game, according to Women Soccer United. Women in Egypt are always encouraged to be protected by a man, whether that's a relative or a trusted colleague. Women walking alongside other men rarely get harassed, bothered, or attacked because others perceive her to be in the protection and possession of another 'man', so her existence is validated. The thought of having a woman protect others is so farfetched given that society doesn't consider her capable of even protecting herself. Hind Wagih, an Egyptian bodyguard, smashes the stereotype with strong determination, and stronger biceps, that would scare the toughest misogynist away. "I learned to anticipate danger, and how to use weapons safely as a reaction,'' Wagih said on Mehwar TV's 90 minutes talk show, adding that when it comes to performance, nothing matters but dedication and hard work, "there's no difference between men and women on the ground.''