Egyptian presenter Gaber al-Qarmouty, showed up on air dressed as a utility bill in protest over increasing energy costs. 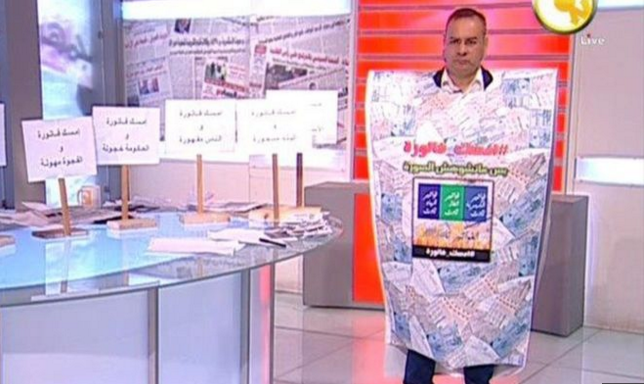 Egyptian television never ceases to amusingly surprise its viewers with its light - and at times perhaps too entertaining - incidents. In the most recent incident, Egyptian presenter Gaber al-Qarmouty, showed up on air dressed as a utility bill in protest over increasing energy costs, according to BBC News.

Appearing wearing a giant cardboard plastered in bills, Qarmouty appeared on ONTV channel saying, “The issue is not just about the electricity bill, it is actually water and gas too. I do not want to incite against the state, but I must say there is a crisis regarding the electricity bills, we’re really feeling the pinch,” according to the aforementioned source.

This follows the Egyptian government’s announcement in 2015 of lifting electricity subsidies gradually over five years, a situation where the prices might potentially double.

This comes as part of a new online campaign titled “Catch a Bill” in which people have been venting their frustrations over raised utility prices, with many posting pictures of their actual electricity bills, according to BBC News. Member of Parliament John Talaat announced that in light of the massive public response, he will be presenting to the parliament a statement requesting an explanation for price increases.