2016 wasn't all bad news, and although many think it was the worst year, we compiled enough evidence to prove that there was plenty of good news from Egypt in 2016. 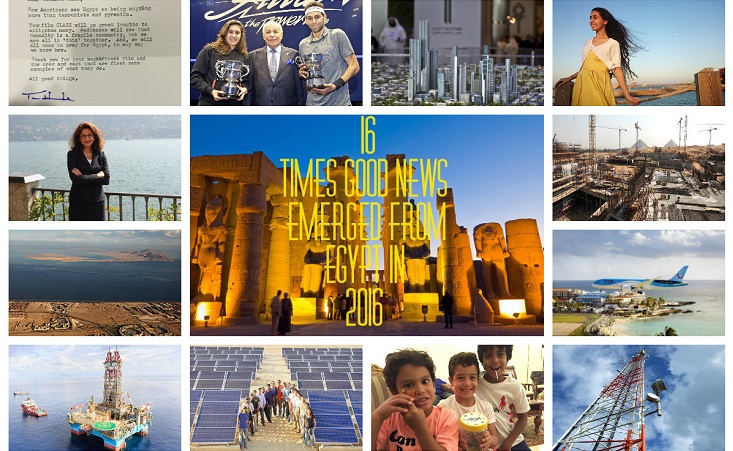 Many are calling 2016 the worse, but the truth is there's plenty of good news that emerged out of Egypt, but sadly it seems completely overshadowed by the bad news that dominated the news and, subsequently, our timelines. In an effort to break the cycle of negativity, we decided to compile 16 times good news emerged from Egypt in 2016. Egyptian-born Dame Nemat Shafik inspired women across the planet this year, becoming the first woman to ever be appointed Director of the London School of Economics, one of the world's most prestigious academic institutions.
4G Network Finally Arrives in Egypt After a long negotiation process, all of Egypt's Telecom companies finally agree to a deal with the government to provide Egyptians with internet worth paying for, as many Egyptians have been complaining for years of the extraordinary prices for incredibly slow internet.
Administrative Court Upholds that Tiran and Sanafir Belong to Egypt After it was announced that Egypt had handed over these two islands to Saudi Arabia, Egyptians decided to protest the decision. Not many expected the deal to be blocked, but coming as a shock to the nation was the administrative court's decision not only to reject the deal, but also the government appeal of the ruling. The saga continues to unfold as this week, parliament voted against the court's decision. After the Russian plane crash in 2015, almost all flights to the popular tourist resort were cancelled, decimating Egypt's tourism sector. Thankfully, in 2016, the flights started resuming from various countries, including Belgium, Germany and Italy. However, still holding out is the UK, while Russia has announced that flights should resume at the beginning of 2017. Egypt's dream of a new capital seemed a little far fetched until China announced it would invest $35 billion into the project and help in its construction.
Japan Loans Egypt $451 Million for Grand Egyptian Museum Construction After the project was delayed for seemingly forever, Egyptians began to worry there would be no way of paying for the rest of its completion. That was until Japan decided to loan the country $451 million strictly earmarked to finally launch the museum the whole world has been waiting for.
Egyptian Films Clash and Hepta Garner International Awards and even a Shout Out from Tom Hanks Mohamed Diab's Clash is currently cleaning up at International Film Festivals and is an impressive statement that Egyptian films are returning to their former glory. So impressed by the film, THE Tom Hanks even sent him a letter complimenting his exceptional film.  Honourable mention goes out to Hepta, which also garnered international attention, but Clash was officially selected as Egypt's Oscar nomination. With a little luck, Clash will reappear on next year's list as the first Egyptian film to win an Oscar.
Egypt Sends its Largest Olympic Delegation Ever to Rio 2016 Although Egypt only returned with 3 bronze medals, it managed to qualify the largest delegation of athletes in the country's history. Competing over the summer was 120 Egyptian athletes, an accomplishment in its own right. Adding the icing to the already sweet Rio cake, was the fact that Egypt's Paralympic heroes managed to capture 11 medals.
Luxor Named 2016 Tourism Capital of the World by UNWTO It's no secret that Egypt's tourism is struggling, but coming in as a desperately needed win was the selection of Luxor by the UNWTO (United Nation’s World Tourism Organization) as the tourism capital of the world for 2016, providing a little boost to help Egypt's tourism recover from years of political instability and flight bans.
Egypt is Growing Forests in the Desert with Sewage Water Deserts are often so dry and barren that little to nothing can grow in them. Well, for a few years now, a team of scientists have been making the impossible possible by not just growing a few flowers in the sandy grounds of the Egyptian desert but more than 20 mini-forest plantations.
Egypt Becoming Global Gas Giant After Another Massive Mediterranean Sea Discovery Although Egypt isn’t currently rich with tourists, it’s proving to be extremely rich in resources ranging from gold to gas. British oil company BP and Italy’s Eni announced this year that they have found yet another significant gas discovery, off the coast of Egypt. Believed to be almost as large as the Shorouk concession, the latest find solidifies Egypt as a gas giant that could potentially help the country out of its economic problems.
Egypt's First Ever Solar-Generated Electricity Plant Opening this Month A KarmSolar plant launched in September and is expected to save up to 600,000 litres of diesel annually, according to CEO Ahmed Zahran. Additionally, it should also aid in avoiding the emission of 1,620 tonnes of carbon dioxide per year. The plant, which cost approximately EGP 14 million to create, plans on selling energy primarily to the private sector - to Juhayna in Al-Wahat Al-Bahareya specifically. Egyptians Dominate Over 50% of the World's Top 10 Squash Rankings This year, Egypt was introduced to one of its brightest and most brilliant young minds like Deena Mousa. The prodigy invented a mixture of chemical components that can stop severe bleeding faster than the medicines currently used in hospitals. Over an area of 24,000 square metres in New Cairo, the Ahl Masr Foundation burns hospital is set to provide medical services for burn victims, in addition to psychiatric treatment, outreach programs, and social rehabilitation.

To read the original story click on each title.