D-CAF Crowdfunds for a Cause

For a very special project designed to raise awareness of the plight of disabled people in a city like Cairo, D-CAF are crowdfunding the purchase of 20 wheelchairs. Here's how you can help... 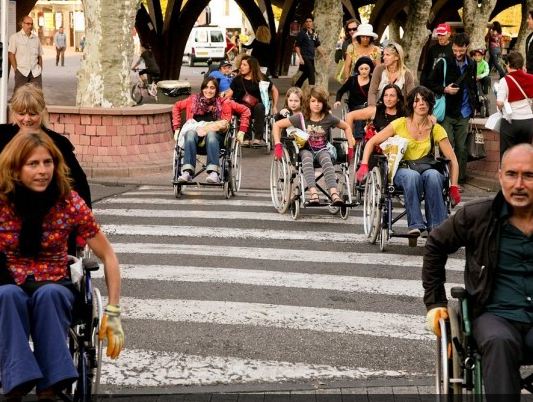 Every year, D-CAF takes over Downtown Cairo, the multi-disciplinary festival transforming the center of the city into a venue for expression and experimentation, a space for music, visual arts, dance, film, theatre, and just general, all-around creation to transpire. For a few weeks a year, culture’s cup runneth over as the streets and spots dotted along Downtown are teeming with talent. This year, the festival is adding an additional dimension to its roster with Mission Roosevelt, a collective performance piece that invites an audience on wheelchairs to cross an urban space. The project, which is intended to raise awareness about disability, has kick-started a crowdfunding campaign to raise the necessary funds to procure the wheelchairs, which will then be donated to an Egyptian NGO.

Mission Roosevelt is based on the premise of utilising public space to provoke discussion and creation. The project taps 20 members of the public and challenges them to take on the streets of Cairo on wheelchairs. Now let’s face it; Cairo is a bitch to navigate even you don’t suffer from any disability. Walking down a street is no simple task, it’s riddled with limited sidewalk, cracks, piles of trash, cars consistently daring you to a high stakes game of chicken…you know the drill. Imagine the difficulty exponentially increasing if you’re limited to a wheelchair, intensified by the fact that most of Cairo is blatantly not wheelchair accessible. This is the aim of the project, as the participants “take a moment to reflect, to rethink disability and experience it in new ways.” By attempting to conquer the city in wheelchairs, “participants, the audience and passers-by are reminded of their own complicity in the social construction of disability.”

In order for the project to proceed, they need to raise $2,600 – the donations received from crowdfunding will be used to purchase the 20 wheelchairs involved in the urban project, all of which will be donated to Egyptian NGO, Egyptian Abilities, an organisation that works to create better lives for people with disabilities, when the performance is over.

You can take a look at a video below of a prior Mission Roosevelt activation in France; don’t worry if you don’t get French, it’s the idea. Click here to find out more or donate to the cause.