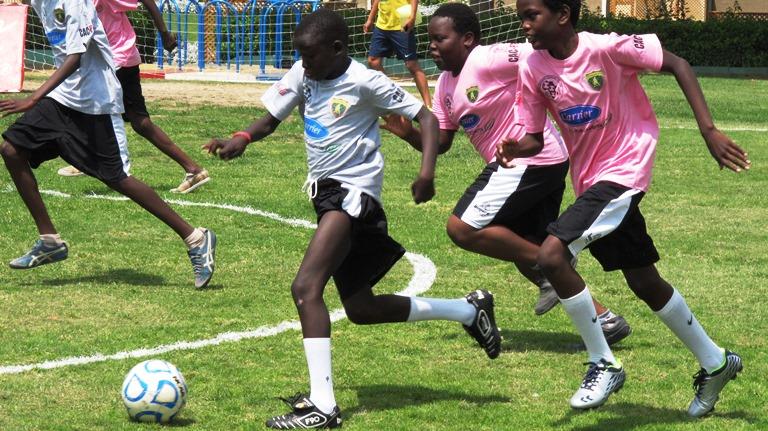 Living in Egypt with its myriad problems can be tough for anyone, but none have it as rough as the thousands of orphans living on the street or in orphanages. Dealt the worst cards in life, few opportunities are made available to these disenfranchised children, leaving entirely too many innocent souls falling through the cracks of a society that continues to fail to alleviate their misery. Recognising their plight and hoping to give them a more positive childhood, the Elite International Soccer has teamed up with CACPTO (Cairo American College Parent Teacher Association) and African Hope School to throw a street children tournament tomorrow at the Cairo American College.

The Elite International Soccer program began in 2012 with a clear aim to provide specialised training by highly qualified and certified coaches that help develop young athletes' (between the ages of 5-15) skill sets without having to commit to a full-time club. According to co-founder/coach Zane Ahmadein, “Both me and my partner Lee Paul work as coaches at Cairo American College, and we were approached by some parents that wanted us to provide some extra training for their children, because there wasn’t a full year program to develop individual skill. So based on the demand we decided to establish a quality program that will help develop the skills required to give them the opportunity to play abroad.” With a wealth of first-hand experience acquired from playing in the MLS and in North American Colleges both coaches know what it takes to get noticed and have even gone so far as bringing foreign recruiters to scope out players in their program. In just a few years the program has grown successfully and has been heralded by all those who have joined it.

Although the kids in the program come from privileged backgrounds, the EIS strongly believe that all children should have the equal right to play and express themselves on the field, and set out to establish an outreach event that would give street children the opportunity to forget their hardships using the promotion of this beloved sport, and to give them tools that, with enough dedication, could possibly pave a path for a better future. The first outreach event was coordinated between EIS and PLAN Egypt, and was able to bring 60 street children to their skills clinic.

The event was such a success that it was followed up with another day event at the Cairo American College, organised by the EIS and the African Hope School. 68% of The African Hope School children are UN refugees, who have escaped from civil war and have been robbed of their childhood innocence. This event managed to bring out 150 children who participated in a fun all-day tournament. Proving to be an enriching experience popular with both children and organisers, a similar event is set to take place tomorrow at CAC between 9AM - 3 PM. “One-off events are definitely not enough to develop their skills but we have started getting approached by various NGOs who are interested in establishing scholarships into our academy as a prize to those who show the most potential,” explains Ahmadein. With endless interest from NGOs one can hope that with the right kind of support these events become more frequent.

Egyptians love soccer and yet continue to fail to reach the FIFA World Cup; if Egypt ever hopes to turn this around it will have to start at a grassroots level. Organically establishing themselves as an incubator of talent, EIS may be the answer Egypt has been waiting for, providing the youth with the development and training required to produce superstars that can compete globally regardless of their backgrounds.

To learn more about EIS and this Event visit their Facebook