[Exclusive] We talked to Amal Soliman on the myriad of challenges she encountered to become the first Ma'zouna (Islamic Wedding Officiant) in the country a decade ago. 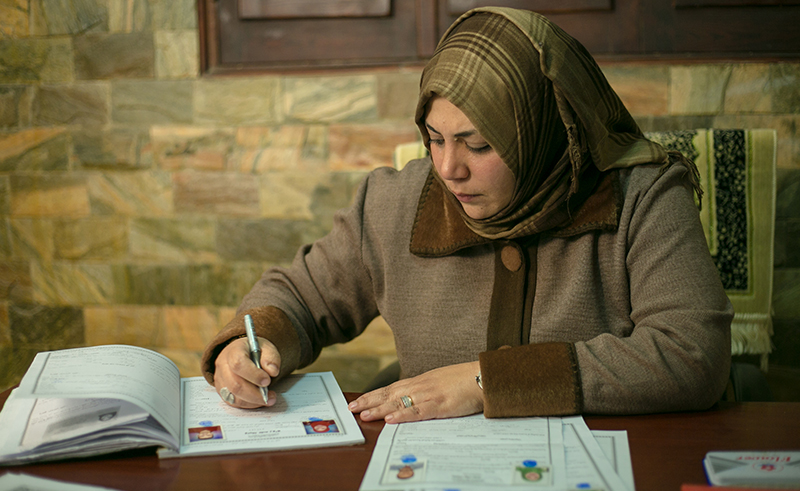 A small village in Al Sharqiya governorate was the scene of a controversy that had Egyptians debating for months back in 2009. It was when a town woman, Amal Soliman, submitted an official request to become the town's new Islamic wedding officiant, a position which has been exclusively held by men for centuries. After a year and a half of an extended legal process, Soliman obtained her license and became the first woman in Egypt to hold such a position.

Finding her whereabouts was an easy feat as we drove up to her town. All we needed to do is ask any random passerby for the home of the ma'zouna (Female Wedding Offciant), and everyone would point us to the direction. For Soliman had, overnight, become a minor celebrity in the town. "It all started back in 2007 after I obtained a Master's Degree in law," recited Soliman. "After the town's wedding officiant passed away, I thought to myself why not apply for the job?"

The road wasn't paved with roses for Soliman. The first challenge was the president of the town's Ministry of Endowment Unit, who basically told Soliman to get lost when she first showed up to apply for the position. "Just because it hadn't happened before, he assumed it couldn't. The law on the matter is clear and doesn't specify a certain gender for the position," she explained. "People were divided. Some were supportive, others were mocking me, and a few completely rejected the idea."

After Soliman started practicing, the public opinion in the town started swaying to her favour. With a strong work ethic and dedication, Soliman slowly became an entrusted religious figure. "That's what happens whenever anything unfamiliar happens. People reject it at first and then find out that it really wasn't that big of a deal. It only takes some logical thinking to understand it's not the end of the world."

As she gained people's trust, Soliman was faced with another set of challenges. Her position entails great responsibility and people tend to seek her out for religious advise as well as pressing matters like divorce. "I don't own my time, which is the hardest part about my job. Tradition has it that the wedding officiant is available at all times, and when people don't find you in the office, they simply go to your home and knock the door." Often, Soliman would find herself officiating a marriage in which the bride seems forced into. In such case Soliman usually finds an excuse not to finish the ceremony and declare them married before having a one-on-one with the bride, a practice which is typically overlooked by most of her peers. "If I end up talking to her and finding out that the marriage is forced upon her, there's no way I could marry them."

The issue of divorce is another one that Soliman encounters more often than not. Out of the blue, Soliman could find herself in the middle of a severe family fight with not much to say to fix the situation. Being in her position, however, requires her to try her absolute best to keep divorce as a final resort. "Some cases are extremely severe and in such case logic rarely works," explained Soliman."Families on both sides would be walking in with a ready resolution to finalise a divorce and wouldn't even allow me to give my two cents. Other than that, I found that countless marriages can be saved with some kindness and compromise."

As Egyptians, we grew up with a certain image of a ma'zoun deeply imprinted in our brains. In an Imam-like attire, that is. Until today, many couples specially request the wedding officiant to adhere to that attire to maintain the spirit of the image they had always imagined their weddings would look like. How does it work when it's a woman? "I can't wear a galabiya like Imams do. The confusion here is that, traditionally, people in my position would usually be from Al Azhar graduates, and that's what they wear," explained Soliman. "But nowadays, it's more common for Law or Sharia graduates to become wedding officiants, and they naturally dress just like the next person."

Now, almost a decade after Soliman became Egypt's first female Islamic wedding officiant, more women are following in her footsteps and venturing into fields that have typically been closed off to them. "Just in our town, there's me, and we have a female MP, and the president of the town's council is also a woman."

This article was originally published on ElFasla.