Illusions: Party to Another Dimension

Venture Productions are organizing THE party of the season - and quite possibly the foreseeable future, promising an impressive 3D show for the first time in Egypt, along with sexy UK remix duo Full Intention at Gouna's Duport. 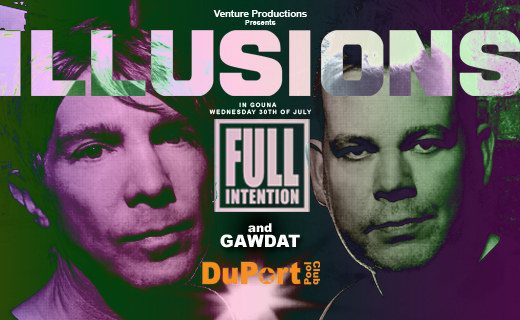 It's no secret that after a month-long drought, Cairenes are itching for a party. Now that Ramadan's coming to a close, all throughout August, the Sahel shoreline will be overloaded with places to go and dance off all that excess haram energy you’ve built up throughout Ramadan. But for Eid (i.e. primetime for partying) we’ve got our eye on one specific party in Gouna that's set to rock the Red Sea like no other.

Don’t get us wrong, we love Sahel as much as the next person, but Gouna, and all its shenanigans hold a special place in our hearts. There are no long highway drives either; everything is literally tok-tok ride away. So on July 30 we're gonna be hopping into our tok-toks  and heading over to Duport for a party that will literally take your mind on a psychedelic trip. Illusions, organised by Venture Productions, is one party that is actually living up to its name, and will be taking you down the rabbit hole and transporting you into the realm of 3D partying.

For the first time ever in Egypt, Venture Productions will be putting on one hell of a visual show, with a 3D projection system. All the glass surrounding the party will be turned into 3D screens. The entire party will be one giant illustrious illusion, with you in the middle, surrounded by a kaleidoscope of crazy images created by Alchem Studio, literally taking you to another plane of partying. We're officially beyond intrigued.

In the midst of all this, while you're immersed in a creative visual wonderland, your ears will be equally pleased, because Illusions has tapped Full Intention and the Gawdat Brothers to take over the decks. The inimitable Gawdat Brothers will be warming up the sound system with their sexy House tracks, following which the prolific English remix duo that is Full Intention will be working their musical magic on the turntables, sending out sound waves of their signature Deep and Tech House. With these two acts behind the decks, Illusions has got the musical side very well-covered, and all you have to do is surrender your body to the music (and the vodka). Oh, and there will be go-go dancers. A few half-naked hot women moving their (perfect) bodies to the beat never hurt anybody.

We don’t know about you but we're officially sold on this party. Venture Productions are the people who brought you the invite-only uber-exclusive 15 Minutes of Fame party at the Kempinski Hotel in June. After blowing people out of the water with this upcoming party, the epic event planners will be setting their sights on the concert scene in Egypt, but you'll have to stay tuned to find out more about that.

Alchem Studio, who are whipping up the wicked 3D visuals are the same creative minds behind some incredibly kick-ass visuals at venues all over town, from Vent to Makan. With these two teaming up, and some exceptional DJs thrown in, we can definitely say this is one party that is bound to be memorable.

Tickets for Illusions are 350 EGP a pop. If you want a high table, which takes 6 and comes with 12 rounds of soft drinks, beers, and one free bouchon, it's an additional 1000 EGP. A lounge is 2000 EGP, and offers double all the drinks. Once you've reserved you can head on over to Moods or Duport to pick up your tickets. We suggest you get on it, because they're selling out fast…