In an effort to dispel the major taboos surrounding touching dogs among the Muslim community, one Malaysian man organised a mass dog-petting event, only to be met by major backlash, and even death threats… 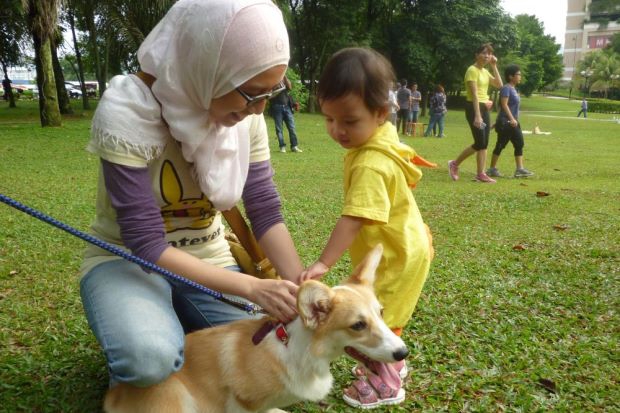 From a very young age, Muslims are programmed to believe that dogs are dirty animals and that touching them is forbidden. Looking to dispel the myth about canine cleanliness, one Muslim in Malaysia organized a dog touching event to prove that these lovable companions aren’t a sin, but rather a gift from Allah.

The “I want to touch a dog” event was organised by Syed Azmi Alhabshi, who took to Facebook to encourage Muslims to overcome the fear and taboo associated with touching a dog. The event took place on October 19th at a park in the western state of Selangor. The event was considered a resounding success, as almost 1,000 participants turned up to face their fears.

The event gathered a variety of breedsm ranging from huskies to poodles, and attendees were encouraged to wear colours denoting their level of interest. Those wearing yellow wanted to pet a dog, while orange was worn by those just wanting to watch, and red was reserved for dog owners.

According to Alhabshi, “This is just a baby step for us. I don’t know whether people will now understand not to throw stones at dogs, but we want people to know that if they are not knowledgeable or are curious about something, they should just ask.”

Despite the clear elation on the faces of those who attended, the event was met with tons of backlash on social media, with many labelling Alhabshi a heretic, a closet Christian, a Zionist spy, or even a Shiite Muslim. Some went as far as sending death threats, which has led the good-hearted organizer into hiding.

Muslims in Malaysia largely subscribe to the Shafi’i school of jurisprudence, which views dogs as unclean, and does not permit for them to be reared as pets, cuddled, petted or kissed. The only reason to touch a dog is if it needs help. Following the uproar, the federal government in Malaysia issued a religious edict that deemed the touching of dogs went against mainstream Islamic doctrine.

“Last weekend, Syed Azmi brought hundreds of Malaysians together to help address animal cruelty and overcome prejudice and fear towards dogs. Now, he is under attack by those who seek to perpetuate ignorance and irrationality. Let him know that Malaysians stand by him in support of this wonderful initiative. Stand up and speak out,” read the post, which has since garnered more than 2,400 shares and proves that the community supports his efforts.

Animal cruelty is an epidemic in the Muslim world, and events like these not only educate, but tackle long held prejudices that often result in animal torture. If you believe Allah made you then you should believe he made all animals and that torturing them is a greater sin then touching them.