The 5 Craziest Fossil Discoveries in Egypt

Today's bus-sized dinosaur fossils discovered in Dakhla Oasis is just the tip of the iceberg. 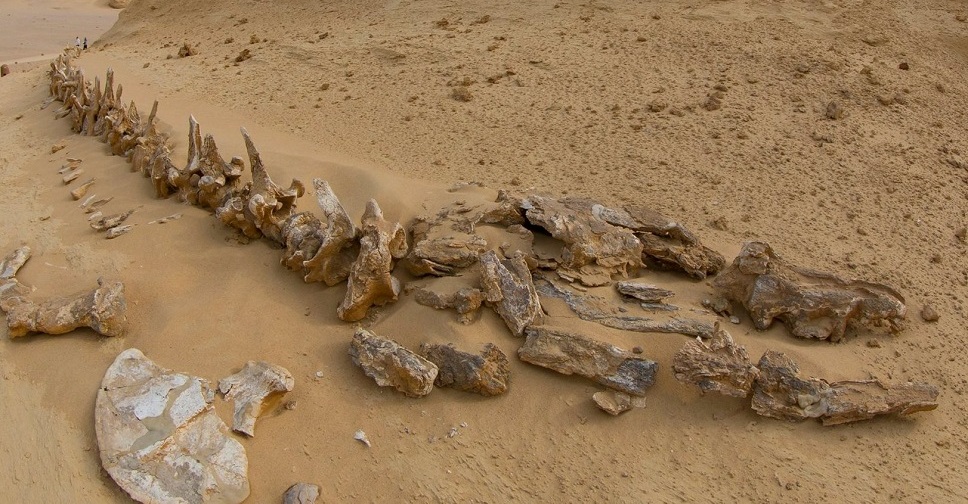 With news of the stunning discovery of the remains of a bus-sized Titanosaur in Egypt's Dakla Oasis making the rounds, we came face to face with another discovery; Egypt's long history goes far beyond the Pharaohs. In fact, life existed in our land way before humans came into existence. So we gathered a list of Egypt's most dazzling fossil discoveries (Pharaohs EXCLUDED!), check it out: This discovery is as remarkable as it is amusing; Egypt's Ministry of Environment announced in 2015 the discovery of fossils of a 40-million-year-old whale, inside of another whale, both eaten by a shark. Yeah, I'm not making this up. The 18-metre long fossils, unearthed in Wadi El Hitan, is the only complete skeleton of the creature to have ever been found. Scientists remain divided on whether the smaller whale was a fetus or a meal, with most of them leaning towards the latter. The ancient creature is believed to have jaws  able to crush preys with a force exceeding 1,600 kg, and, as opposed to whales living today, had no issue feasting on other whales. Once at the top of the food chain, this dog-like ancient carnivore, named after ancient Egypt's god of the afterlife Anubis, roamed modern-day Egypt some 30 million years ago. With varied sizes ranging from a few kilograms to over 500, hyaenodonts were one of the most dominant terrestrial predators across most of the African continent after the extinction of Dinosaurs. "This new species is associated with a dozen specimens, including skulls and arm bones, which means we can explore what it ate, how it moved, and consider why these carnivorous mammals died off as the relatives of dogs, cats, and hyenas moved into Africa," reported Ohio University's Paleontologist Matthew Borths last April, according to PHYS. The giant 37-million-year-old catfish fossil was unearthed in Egypt's world-famous Wadi El Hitan (The Whale Valley) in 2011 by field exploration mission by Mansoura University's Vertebrate Palaeontology Centre. The fragmented fossil is now widely considered a predecessor of the The Humble Catfish, which provided valuable insights into the evolution of the popular aquatic creature. The Qarmoutus Hitanensis was almost 1.9 metres long and is the first bony fish species to be discovered in Wadi El Hitan, according to National Geographic. Almost 300 KMs south of Cairo, a Pennsylvania  University paleontology team unearthed the partial skeleton of what is believed to be the second dinosaur to have ever walked the planet in Bahariya Oasis, from which the previous fossil discovery was reported in 1935. The 30-metre-long Paralititan, which weighed a staggering 80 tons, was found among fine-grained sediments containing fossils of ancient turtles, fish, and other maritime creatures. The discovery re-affirmed scientists' beliefs that Bahariya Oasis is a largely neglected 'dinosaur haven," as reported by the NY Times in 2001. In limestone deposits in Mokattam, this 45-million-year-old was discovered by renowned German Paleontologist Eberhard Fraas in 1904. The relatively small-sized creature constituted a firm confirmation that some ancient species of whales did in fact evolve from terrestrial ancestors. The discovery constituted a milestone in further understanding one of the most complex evolutionary transitions in human history.