These are the artists pushing boundaries, taking a step outside their bedrooms, giving Egypt's music scene diversity in spades. Also there is a song made for a milkman... 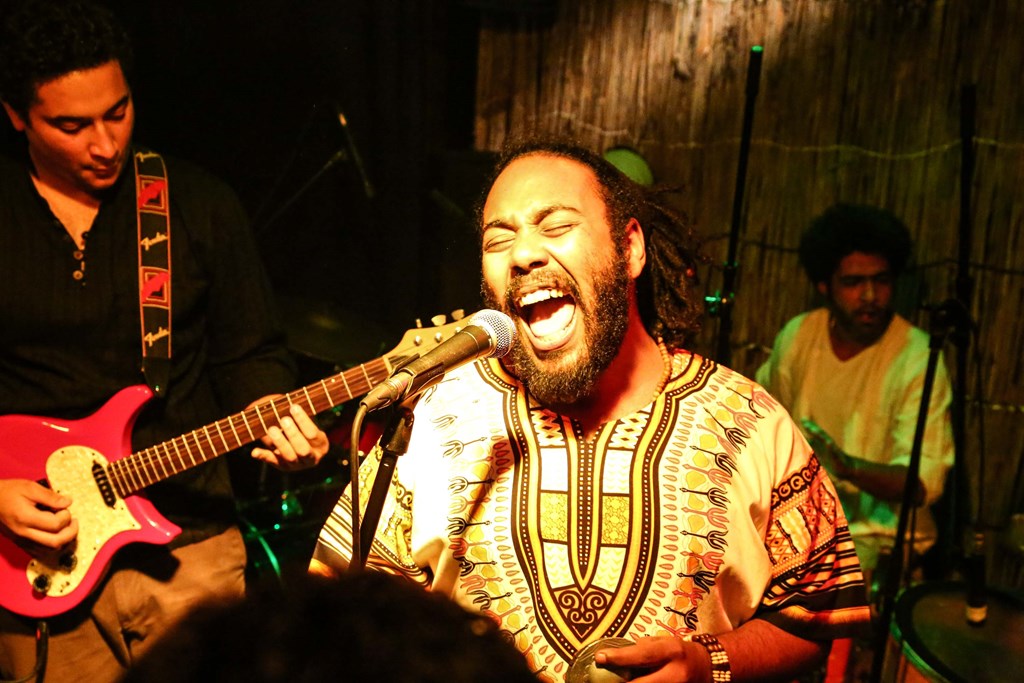 If Arabic Metal will ever be a thing, you'd probably have to thank Kato, the one-man Rock band making music you could head bang to just as equally as you could slow dance to. His self titled album this year is looking at nearly 100,000 listens and that is for a genre of music that he is essentially inventing as he goes along, with powerful lyrics aiming to rid the Middle East of its negative societal nuances.
Hawidro Hawidro performing at Cairo Jazz Club. Photo by CairoZoom.com
Hawidro is another outfit breaking the mould of commonplace genres in our scene. The eight-piece band's audience has been growing and growing since the beginning of year with their super energetic - make you wanna flip your hair back and forth - Egyptian Afrobeat performances. Their name is Nubian for 'return', and that is their aim; to connect once again our African side that has long been left behind through their upbeat sonic story telling.
Omar El Abd Very subtle, very beautiful and very, very good, El Abd's long form single releases in the past few months make up a gorgeous repertoire of experimental sounds and ambient warmth. He states that his tracks are mostly improvised. This spontaneity never leaves the listener bored as you feel his soundscapes coming to life, and becoming larger than life. He recently released his debut single EP 'Dulcet Noise'.
Blufrank Occasionally donning a Transformers mask whilst performing for reasons unknown to us, Blufrank came into his own this year with his incredibly fresh productions that imagine up a futuristic world of Disco. Whilst most DJs and Electronic producers this day and age are leaning towards darker, heavier Techno themes with their music, Blufrank digs into his 70s nostalgia, and rev - MID(s) // Feelings Installed, 1185 (or How I MET Lumia) and Jungles Of The Unknown // Supernatureeals.
No Talents You have to respect a band who go all out to make a down and dirty Hip Hop/House track the anthem of Ramadan fasting. Taking over the Arabic parody throne from High on Body Fat this year, No Talents killed it and had us in splits, singing along the whole way with tracks like Allahom Enny Sayem and Khara, both accompanied by equally ingenious videos. It's not just the lyrics, but the genre shifts for each track that add to the hilarity and reveal they've actually got quite a bit of talent.
Nadah Shazly The mellifluously voiced Arabic Indie Folkloric artist has been releasing one-off releases for the past three years - beautiful, melodramatic songs rooted in Blues, Jazz and influenced by early 1900 Egyptian singers. But it was at the beginning of this year when finally her corrugated bedroom beats met with her mawwal-style, elongated voweled love songs on stage, and crowds across Cairo watched on dazzled. Read our feature interview with Nadah El Shazly here.
Procession Towards the Unknown Procession Towards the Unknown performing at Darb 1718. Photo by Ahmed Atef Mohamed.
Does exactly what it says on the tin. Fronted by Egyptian heavy metal band Scarab's vocalist Sammy Sayed, their music strives to guide both performer and listener towards altered states of perception. The group which also features Sherif Elias from Scarab and Invisible Hands' Cherief El-Masry, kicked off with a preview release of their 25-minute improvised experimental ambient track, a vacuous journey, ominous and trance-like accompanied by Sayed's powerful spontaneous chanting. They've since performed all over the city, with each performance a different journey than the last. Occasionally joined onstage by wizardresses. Read out feature interview with Procession Towards the Unknown here.
Mostafa Onsy Techno you could listen to, seated on an armchair whilst cheersing over a glass of Bordeaux in the dark corner of a baroque lounge. For lack of a better word, it's elegant Techno. Glitch in form and ominous by nature. Softly spoken sonic experiments without over-trying. Whilst starting off gradually DJing here and there, he's moving into the production world with a lot of finesse.
Chiati Chiati performing at Venue. Photo by CairoZoom.com
Chiati, 19, is somewhat classically trained in making Techno, if that makes any sense. A multi-instrumentalist who studied music technology and sound engineering at AUC and now resides in Berlin, found a home in hard-hitting after-hours Techno inspired by the likes of Gardens of God. This year he released his first two EPs, and they were both outstanding - first Enter with Egyptian label Besworx followed up by Continuum with Danish label Blindfold Recordings in September. Betoko recently included his track Mafeesh Nom feat. Emara in his podcast for Get Physical Music.
Shobek Lobek Whether you're into it or not, you can't ignore Electro Shaabi's presence in our scene and if we're talking Shaabi you can't ignore Shobek Lobek's massive hit of the year Mafeesh Sa7eb which has now garnered over 34 million views. Fun fact: The track was actually meant for a milkman and his sons named Awlad Seleem. They commissioned the boys to produce a track promoting their business. The track was so good, and the lyrics so true and profound for many people on different levels, that the song became a nationwide overnight sensation.