Making it big in the predominantly male-dominated music industry is no walk in the park for women around the world, let alone the world of experimental music in Om el Donya. 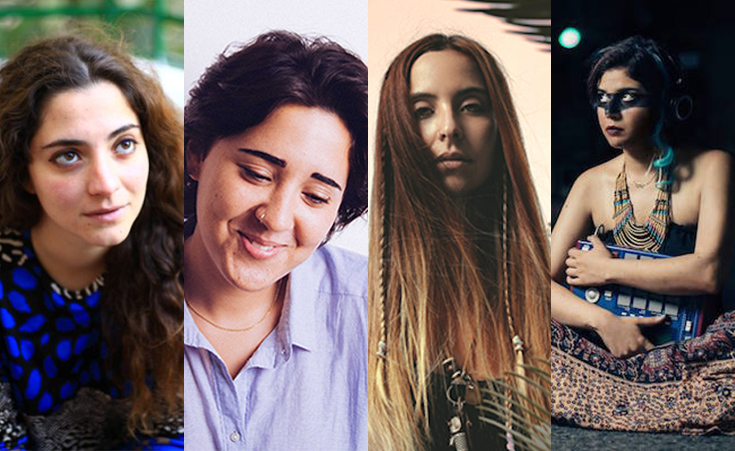 When you think of female recording artists, the likes of Britney Spears, Madonna, and maybe Whitney Houston might come to mind. On the other hand, when thinking of female music producers – to be specific experimental producers – it's a bit harder to remember a lot who are worth mentioning even though many women pioneered the genre and continue to do so today. If you don't know a lot about the history of electronic music, what you might want to know is that several key female figures did a lot to pave the way for electronic music to reach the point it has today.

There's women like Ada Lovelace, born in 1815, who was the first in the world to use a computer to produce music; Lithuanian prodigy Clara Rockmore who took the world by storm in 1928 performing on the world's first electronic synthesizer, the theremin; Delia Derbyshire, the woman behind the wobbulator, which was used to create the sound used for travelling through outer space in 60s cinema and broadcasting; up to artists like Bjork, who took experimental music to a whole new level, playing sold out shows in concerts and festivals around the world.

Experimental electronic music, it seems, has been garnering a sizeable following from Egyptian producers, a notable contrast between the disastrous 90s where the entire country was saturated in Western pop culture. Everyone and their bawab knew who Michael Jackson was, and every taxi driver kept a fresh stock of Ricky Martin – for the foreigners, of course. Most Egyptians at the time only knew of two types of music: 3araby w agnaby. Everything fell into one of these two categories and, at the time - unlike now, very few people knew about experimental music.

Now experimental music is bigger than ever; Egyptian producers are finding their place within the musical community, especially over seas. While some of these producers are women and some electronic music fans - especially experimental - will definitely have heard of some of them, they're unfortunately not known by many. Commercial media has failed to shine a light on such artists, a sad thought since most of these girls have seen widespread acceptance from the international community and have actually travelled the world showcasing their music. Our list is not necessarily comprehensive; many more exist, and many more will be inducted into the genre as experimental music draws in more and more followers every day. Sarah Badr, a.k.a FRTKL, is an Egyptian girl raised between the UK, Egypt, Bahrein, and the USA. The RBMA alumnus was the second Egyptian woman to make it to the Red Bull Music Academy. Her work is hard to pin down to one exact inspiration, she notes that she started out listening to classical music, jazz, rock with its various guises, hip hop, and pop. However, Badr moved on to discover trip hop, a move that she says had her engulfed by the world of electronic music. Her productions contain some very ominous sounds – eerie at times, a rich mix of classical instruments and sampled recordings pieced together with meticulous flow.
Hana Yousri (J!n) Hana Yousry, a.k.a. J!N, is not your average Egyptian girl. She is part human, part jin (Arabic for 'demon'), and as soon as you play her music you will willingly surrender your soul. Her ambient/experimental productions are hauntingly good, terrifying at some points, but in the most relaxing manner. Her own voice appears in her tracks, and with it she adds a sense of originality that would be hard to imitate. Not much is known about her, though, apart from her favourite artists who include the likes of Abyusif, Smash Beats, BamBam, and Zuli a.k.a. Swag Lee, who ignited it the musical flames inside her. She considers him her Mr. Miyagi; reverb on, reverb off.
Nadah El Shazly Egyptian singer/songwriter, producer, and all around talented persona, Nadah El Shazly started out learning to sing opera before becoming a punk rocker where she covered bands like The Misfits. Fast forward a couple of years and El Shazly started making experimental music, an industrial hip hop-ish sound that infiltrates your ears and sends you tumbling down the sonic rabbit hole. Her vocals, inspired by Egyptian singers of the 30s and 40s, is powerful yet subtle, supporting her own productions.
Nur Talented producer Nur – or Nour Emam – has been on a roll with her last couple of releases, hitting all the right spots. At only 15 years old she appeared along side jazz giants Amro Salah and Andre Segone. The year after, she was hosting her own gigs at El Sawy Culture Wheel. Engaged to KIK member Ismail Hosny, she cites him alongside KIK member Bosaina as some of her favourite Cairo musicians. Emam makes a mix of ethereal experimental music, electroacoustic pop, and even some drone track. She utilises classical instruments along with field recordings and samples to deliver a fresh burst of sonic grace.
Bosaina Bosaina, a.k.a. Boosykat, is part of the KIK Kollektive, a solo artist, performance artist, and electronic music producer. This girl is not one to mess with. The first Egyptian to make it into Red Bull Music Academy, she flew to Tokyo to craft her skills alongside hand-picked producers from all over the world. Her solo performances took her far and wide, playing massive festivals like Sonar, Barcelona. She toured Europe with KIK several times, and much earlier than that through her work with the Wetrobots.
Ola Saad Playing both inside and outside of Egypt, Ola Saad has travelled a couple of times with her record label 100 Copies. She most recently played with Beatrice Dillon during the Masafat Festival. As part of her work with 100 Copies, Saad recorded an album with six other female Egyptian electronic music artists –Asmaa Azzouz, Shorouk El Zomor, Hala Abu Shady, Jakqueline George, Nina El Gebarly, and Yara Mekawi – that was entitled Egyptian Females Experimental Music Session.
Aya Metwalli Aya Metwalli is an Egyptian female folk, pop, anti-pop, avant-pop, trip-hop, dark wave, post-punk, electronica, noise artist. Phew, that is a long list of styles for one musician. We can only vow for her musical prowess, though. The young woman is an accomplished artist with a huge fan base,;she is making waves with her music and, although she is not strictly an experimental artist, we believe she deserves a mention for the productions she did.