Opening the music portion of D-CAF with an explosive display of global sounds, Timmy Mowafi meets up with Skip & Die to talk suicide, style and partying with Islam Chipsy... 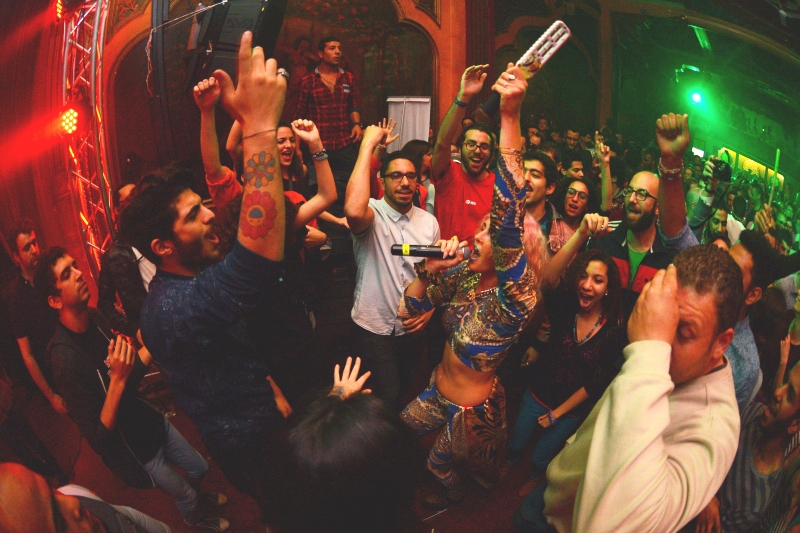 We’re often forced to add slashed prefixes to muscians names for the sake of boxing them up in a little package and couriering them over to you… “Indie/Electro Duo – Oriental/Post Rock Band – Avant-Garde/Techno producer.” It’s usually bullshit and sometimes it’s lazy journalism, appealing to a common denominator but more often than not it’s because the artist(s) in question, in today’s world where PR trumps over actual records and performance, have already boxed themselves up nice and tightly for us to pass around. When talking about Skip & Die, this cannot and must not happen. And clichés like ‘outside the box’ won’t do either. They’re setting the standard for a new box all together. Fuck it, it’s a dodecahedron; a metamorphic blur of body shaking, mammoth beats, bassy dance music, providing a backdrop to catchy, sultry riot-starting vocals. Their performance last Thursday, as part of the D-CAF music programme, felt like it started somewhere in Kolkata via Amsterdam and then took us around the world fist pumping all the way through Cape Town, Rio, Kingston, Berlin and back.

With Catarina thrusting around the stage on vocals, Gino maniacally banging away on drums, Jori executing the scattershot melodies on synth and Daniel strumming away on guitar, their genre-bleeding style had the packed crowd aching for more. At one point, I thought the front row of guys would literally be willing to sacrifice themselves for the frontwoman, hollering and screaming, singing along, reaching out to her like 14-year-old girls at a Justin Bieber concert, whilst the less excitable simply stared on wide-eyed, shouts of “AHA!” reverberating up Sherazade’s high ceilings. With their colossal tribal drops along with the utter magnetism of Catarina, Skip & Die made a loved up army of the frenzied horde.

After the performance, I sat down with affable group, all squeezed in together backstage at the Sherazade. Islam Chipsy’s Shaabi tunes seeped into the less than sound-proof, decaying, wooden door of the changing rooms as we talked suicide, energy and the inspiration for their sound…

Firstly, Catarina, are you a wizard?

Catarina: I can’t tell you, otherwise I might just have to kill you.

You had this complete control over the crowd. How can you describe the relationship between you and your audience?

Catarina: I think everything is pretty spontaneous so it's not something you set out to do beforehand. I think the relationship that we all have with the crowd is that we want it to be an interactive experience. We don’t want to be passive, and we don’t want our audience to be passive so we try to get up on the same vibe and the same wavelength. We would just like to have as much fun as we can in the short period we’re here and share that energy with the audience.

How did you think the performance went?

Catarina: We were really excited because we’ve never been here as a band before.

Gino: I’ve been to the airport here before, I think.

Did you enjoy the airport?

Gino: Yes, I enjoyed the atmosphere at the airport. Really nice friendly people, maybe too friendly!

So how and when did you guys get together?

Catarina: We got together about four years ago, Jori and I met in Amsterdam and we were doing different things at the time but we thought, hey, let’s put our magical powers together and create a potion. Jori, at the time, was in a band with Daniel and then eventually Gino, who had played with them before, joined us.

Catarina: Depends on the mood!

Really? You don’t seem like a very pessimistic, suicidal person?

We’re getting quite dark here, think about suicide a lot?

Gino: I dreamed about suicide last night! It was a weird dream, I fell and lost my keys inside the Nile and a little boy jumped after it and I saw him slowly drowning to the bottom with my keys and the only way to get my keys back and go back into my house was to commit suicide and everything would be fine.

You wouldn’t know if the kid was okay or not though, because you’d be dead…

Gino: Yeah. The weird thing about the dream was that it would, like, start another circle after I died. So I spent all night trying all kinds of weird things to get myself killed to get my keys back!

Catarina: I love it! I love that movie, it’s such a brilliant concept.

Jori: The thing is with the band name, it's these dark things and the light things, it’s not me or Cata, but they are one.

Catarina: Yeah, when I say I think about suicide constantly it’s more about appreciating life when you know that it could be taken away or end any minute. I’m from South Africa, it might be the same here, you grow up with…

*My brother calls. Catarina picks up herself and tells him we’re busy.*

Sorry you were saying…

Catarina: Yes, for us Skip & Die is the way that we perceive life.

Jori: You were talking about South Africa and growing up there…

Caterina: Yeah, you’re constantly aware of death but also about the beauty of it all. I see it as an eternal cycle.

Jori: And it’s about destroying the fears, you do that and you enjoy everything so much more.

Alright back to music before we go further down the Rabbit Hole. You have all these eclectic influences from all over. Where did this come from and how did you end up putting it all together…

Catarina: We travel a lot; we’re like nomads in a sense. That’s the way I feel like I’ve always been after being born and raised in South Africa and then I lived in Argentina, Spain, and Portugal, so I feel like I’ve collected all these different cultures that I’ve been exposed to into my one culture which is a whole jumble of all these things. Jori also travels a lot. As long as I’ve known him, every year he goes away for a month by himself.

Jori: You know it started with just finding samples and old records in markets and sampling Moroccan music and things like that. After that, we started touring and meeting people and collaborating with artists. So for me, travelling is already a big part of music. And if you’re listening to music you’re already travelling in your mind. We all listen to a lot of different kinds of music, but we’re not stuck to one genre; we’re not purists. We like a lot of things and we fool around with everything we come across that seems interesting. But I think the most important thing is the energy that the music has, like for example what we’re hearing in the back ground now.

*Islam Chipsy’s drummers smash away at a synchronised Shaabi beat that shakes the room. Gino has his eyes closed, subtly head-banging away*

Catarina: Yeah, they’re incredible. I love how the two drummers play in sync.

What’s the weirdest thoughts you’ve ever had while performing?

Catarina: One of mine is... Well, it’s not really a thought but an actuality, is that this thing is really fucking annoying. *Brings out a remote microphone* I always have to stick it in the back of my pants and sometimes I don’t know where the fuck it’s going because I’m jumping about everywhere and sometimes it slides into the back of my pants and just dangles there and it’s really awkward and I’m just trying to concentrate on what I’m singing to the audience!

Daniel: All thoughts we get on stage that are not about music are really weird, sometimes you have a really short period where you get distracted or bored…

Catarina: You get bored?! What’s wrong with you! We must make you work harder!

Gino: Yeah, like once I thought about what to buy for my sister.

Do you guys have any pre-gig rituals?

Catarina: Freak out a bit!

Gino: We do high fives!

You all look pretty fucking cool today. How important is style to you, what are you influences, and have you always looked so cool?

Catarina: I like to make stuff. I have a lot of friends who are clothing designers, we like to fuck around and I appreciate what they do. I also want to promote them through shows and music videos or whatever. Also I think when you’re on stage people want to see something they don’t just want to hear. The visual aspect is very important.

How close is your stage persona to your real life one?

Catarina: Very close in the sense that it’s all of me as me.

Catarina: No it’s true, it’s a different mode, a different setting. But I’ve learned how to save my energy. If you have to do a show every day I don’t run around screaming all the time. I can go low key and chill and sometimes I just don’t feel like talking to anyone, I just want to get into my own world. Doing shows takes up a lot of emotional energy and the thing is I want to connect to the people and that takes up a lot of energy.

What do you guys do in your free time?

Catarina: Well he’s [Gino] fun because he goes to all the after parties and gets lost for days. So that’s kind of his hobby!

Great! So we'll take you to the after party?

Gino: I’ll take you to the after party!

Alright final question, so we can go rave with Islam Chipsy. Where do you see Skip & Die going?

Gino: I think we should ask these guys to do a collaboration!

Jori: We’re working on a new album which will be released sometime next year and so we spent a lot of time in Brazil, collaborating and working on different rhythms, so for us the traveling and meeting people at this moment is really about creating new sounds. With that, you never know where an album is going to get you. For our first one [Riots in the Jungle], we had all the time in the world to finish it and we had no expectations and now we’re going to all these places. For the next album some people know who we are, and there’s management, and a booking agency and record label and all these things, so it’s exciting to see where it will take us!

So I guess the big challenge in all that is finding the energy in ourselves to create, separately to these things.

Check out our guide to music at D-Caf for some brilliant upcoming performances this month.