Spearheaded by innovative Egyptian app Dawar, this new campaign celebrates children's involvement in what is one of Egypt's most pressing issues. 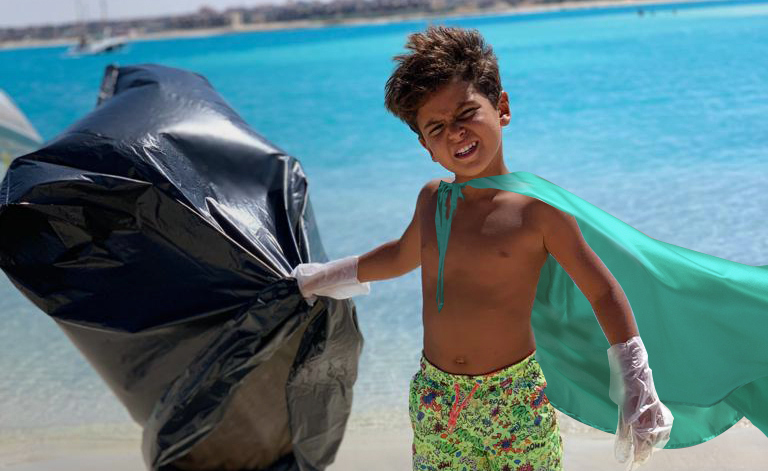 Even just a decade ago, the issue of waste pollution in Egypt was often talked about but rarely, if ever, acted upon. In the last few years, however, there has been a huge rise in public awareness. No one’s exactly sure what triggered it. Maybe it’s the sight of more and more plastic washing up on beaches. Maybe it’s the trend of drive-by littering, which sees many simply dispose of their garbage in any empty space on any street in Cairo.

What we can be sure of, however, is that innovative Egyptian app, Dawar, has certainly had an impact, in allowing users to take a photo of any kind of wrongly disposed garbage, send it with its location and have someone come and clean it up on demand. The beauty of the app is that it lets you take action then and there.

But beyond its innovation and actual real-world usefeulness, the Dawar team have also made it their goal to spread awareness and with new initiative ‘Dawar Heroes’, that goal starts with Egypt’s children. The initiative asks parents to encourage their kids to do their part by cleaning Egypt’s beaches. What you do is take a picture, post it on Instagram and Facebook while tagging Dawar. The team will then add a snazzy cape to the photo, repost it on the page and crown your child as a Dawar Hero. It’s a playful initiative, but one that has a very clear goal.

“Very simple education and awareness are more effective and more impactful when you are still young,” Dawar’s CEO, Mostafa Khairat, told CairoScene. “We still practice all the good habits and traits that were taught to us by our parents or teachers when we were young, yet most of the habits stick in our heads and one day, when you realise the importance of these things, you will be grateful to your parents or teachers. Therefor we believe that environmental and recycling awareness at an early age is key of survival for this upcoming generation of ‘heroes’."

While one might assume that putting on a pair of gloves and picking up trash isn’t the most engaging day at the beach for any young child, the Dawar team begs to differ.

“It’s actually quite entertaining for young kids to understand the importance and implications of behaviour when it comes to matters of the environment, Head of Operations, Amr Fathi, explains of how they have made such a heavy topic more digestible and motivational for kids. “Of course there are some negative aspects, and it is important for them to understand the consequences, however we do our best to focus on the benefits and positive aspects.”

It would be easy to dismiss this notion as idealistic mumbo jumbo, but with Dawar Heroes, the proof is in the pudding.

“The outcome has been pretty impressive so far,” Head of Marketing, Hussein Barrada, revealed. “We have received many pictures from different locations of kids wanting to become Dawar Heroes, which means that the message is getting around.”