In the first of our collaborations with Italian footwear experts Geox, we speak to working mother Daliah Galal about balancing bringing up her little boy with making hit TV shows and fronting a Rock band, all without taking off her heels... 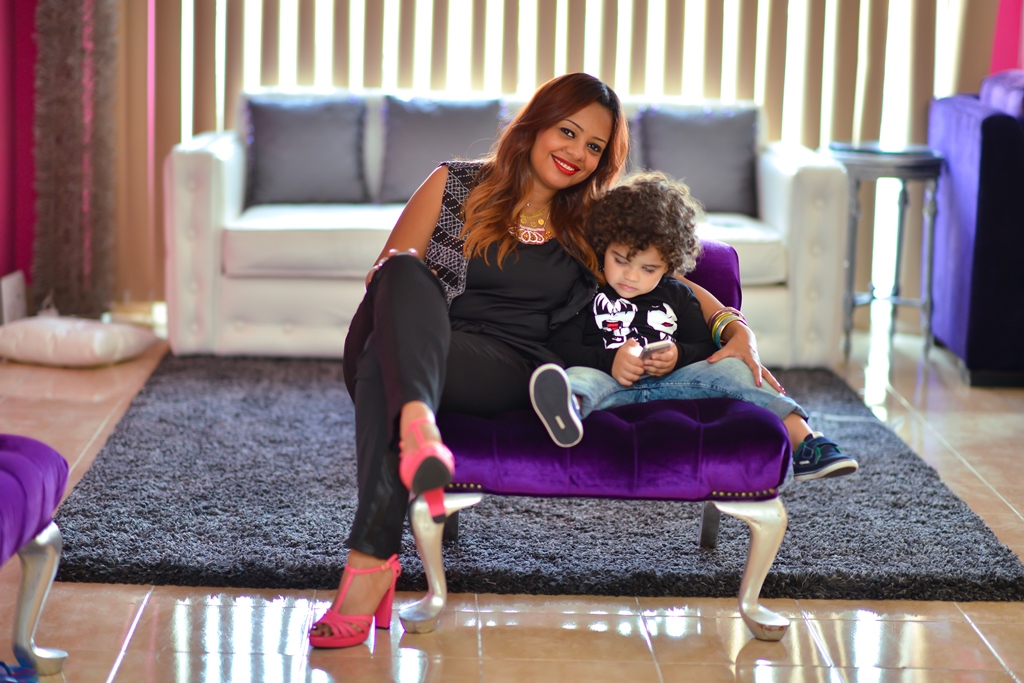 It’s a national holiday when we turn up to Daliah Galal’s home but she’s in work mode nonetheless, answering phone calls and shooting off emails, as though her devices were an extension of her body. Meanwhile, baby Gabriel – Galal and husband Marwan Younis’ two-and-a-half year old son – holds a pair of drumsticks like a pro and bangs away in their home studio. “He’s been listening to music since before he was born,” says Galal, when she finally has a minute to sit down. The creative atmosphere Gabriel seems to thrive in is where his parents met too, both playing in local Rock band Carousel, while rising the ranks in the media and advertising industries over the last few years.

Having started her career at a local glossy magazine straight out of university, it was just three years before Galal found herself in a senior role as an editor there. Today, she’s a producer on one of Ramadan’s most successful  television shows, Ramadan Galak, and as the holy month comes to a close, tensions in the workplace run high and there’s a million and one things to do. “It’s hardly a glamorous job! It’s long hours and late nights,” she says as she chases Gabriel around the house in bright pink Geox heels. This latest stint comes off the back of her work as a content producer on Shababna Show, a celebrity magazine-format programme that’s just been renewed for a second season. In between graduating and the high ranking TV exec position she occupies now, she’s launched a magazine, organised massive events and PR-ed some of Egypt’s most exciting faces and places. Oh and did we mention she got married, moved homes and had a baby in that time too? She even performed at her own baby shower, just days before Gabriel was born, she tells us, adding that “whatever hell and drama I go through, it’s worth it. He’s a reflection of what I am and what I want to be.” We speak to the Jane of all trades about priorities, the pleasures of creativity and parenthood.

What are the greatest challenges of being a working mother?

Of course, it’s juggling a million things and trying to maintain balance. I don’t compromise on work. As harsh as it sounds, work is my first priority. The only thing that could pull me away from work is if, God forbid, my son is sick. So this is the biggest challenge; dealing with the fact that everything comes second.

What are the greatest benefits of being a working mother?

You’re independent. I think it’s what defines you; not in terms of positions and ranks but in challenging yourself and knowing what you’re capable of. I’m constantly pushing myself. Convenience kills me.

What do you think your son is learning from you?

I sometimes work from home and I think that shows him that there’s playtime and there’s also time to be quiet and not sit on mummy’s laptop and drool on the keyboard! From seeing me working and allocating a certain time for drawing and playing with him, he’s learning about commitment.

How do you manage the work/home life balance?

My family helps a lot. I haven’t sent him to nursery yet, even though it would be easier, because I want him to be around people who love him, and give him all this care and attention during his early years. Thank God for my mum!

Do you find it hard to leave your son and head out to work? How do you prepare him to spend time alone with you?

It’s really hard. It’s hard every single day. I know it’s a cliché, but something really changes when you become a mother. I used to think that it was all some MBC 4 style drama when people would tell me this before I gave birth, but something completely shifted the minute I was handed Gabriel. I felt this connection so strong that I would miss him when I got up to shower when he was first born! Now, of course I’ve trained myself to spend a few hours away from him, but it’s still really difficult. My heart breaks every time I leave him. But I think he’s becoming more independent and he’s learning about responsibility because he’s beginning to see that his parents work really hard for him.

Did your husband support your decision to continue working after the birth of your son?

Yes, and he still does. We have arguments because we don’t spend as much time together as a family as we’d like, but he’s very understanding. If he wasn’t, I wouldn’t be where I was today. I would have stuck with what I knew and comfortable working hours, instead of taking risks, working around the clock, and sometimes travelling and leaving him alone with Gabriel.

What’s your daily uniform? The outfit that takes you from taking Gabriel to his grandmother’s house, to the office, to dinner and out with friends...

Comfort is really important, but I don’t compromise on style either. So I’ll usually be wearing heels, whether it’s a business meeting or hanging out with friends, but they won’t be super high, skinny stiletto heels because sometimes I’ll be out for 11 or 12 hours of the day. I also really enjoy accessorising and taking simple outfits to the next level by what I match them with.

What’s your go-to item when you need a confidence boost?

Dresses. I don’t get to wear dresses a lot, and you know, I had a baby and that changes your figure! So I like to get dressed up to feel like my old self again, picking out something super sleek and sexy.

Do you believe that dressing to impress benefits you in the business world?

Even though image is important, I don’t like to rely on that. I hate – and yes, I’m using the word HATE here – girls that use their looks, or flirting or, ahem, other means of communication, to get what they want! You need to be smart. You need to depend on your own skills. I’d always rather win someone over with my wits than with my outfit.

Has your son developed a sense of style yet?

He doesn’t choose his clothes just yet, but he has preferred items. Mostly shoes actually; he seems to look for ones that are most comfortable and have the brightest colours – just like his mum!

What’s an ideal day off for you and your family like?

Very few! Because Marwan is in advertising and I’m in media, our work cycles complete each other, rather than sync up. When he’s done with a campaign, I’m usually starting a TV season that features that campaign. When we overlap in our downtime, we try our best to travel abroad or even stay at a local hotel where Gabriel can be outdoors, swimming and playing. We jam in our studio as much as we can, and Gabriel loves it. First he used to just watch, but now he gets involved, whether he’s banging on a tabla or trying to eat the mic!

Finally, how long can you last in heels?