An illegal dig led to a sacred Ancient Egyptian temple. 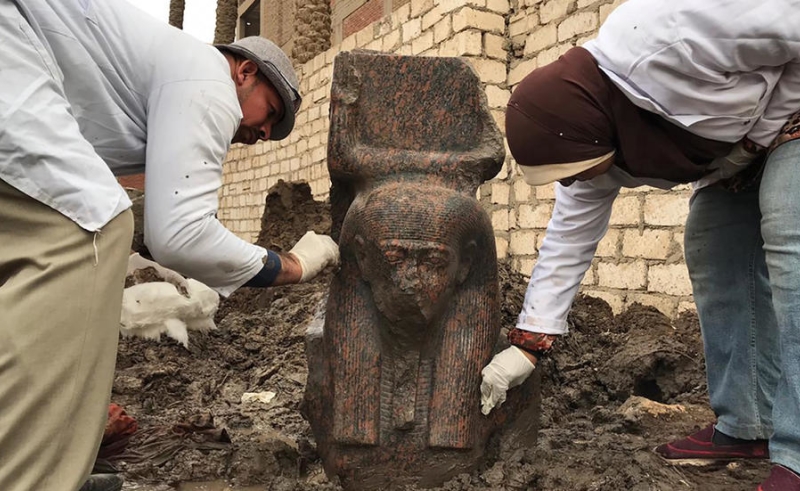 The bust of a statue of Ramses II was unearthed in the Mit Rahina village near the Giza Pyramids, according to Mostafa Waziri, the secretary-general of the Supreme Council of Antiquities. The bust is thought of as unique since it's made of rose granite and etched with 'Ka', the Ancient Egyptian symbol for power and spirit. The bust was found in a temple, which was illegally uncovered under someone's house.

There's a lot to dig into there, so let's start from the top. About a week ago, a 62-year-old resident of Mit Rahina attempted to conduct an unauthorised excavation underneath his home. The reason such excavations are illegal is that - when done by someone with no training in archaeology - there is an increased risk of irreparable damage to the artefacts, as well as a risk of having the items smuggled. Once he was caught, a team by the Ministry of Antiquities was sent to continue the excavations - where, to their surprise, they found the remains of an ancient temple. Over the past few days, the Ministry continuously found evidence of the temple's purpose. It was a temple to Ptah, the patron god of craftsmen, architects and fertility who imagined the world into existence. Clues of his worship were unearthed in the form of 19 chunks of rose granite and limestone; they depicted Ptah and the city of Memphis, where he was revered as 'The Master of all Makers'. They also discovered an artefact with inscriptions of Ramses II undergoing the religious Heb Sed ritual, wherein the continued rule of the pharaoh was celebrated after they've held the throne for 30 years. Then, just yesterday, the Ministry announced the discovery of the bust of Ramses II. Standing at 105cm tall and 45cm thick, the statue with its 'Ka' symbol appears to commemorate the pharaoh's jubilee. The bust, alongside the fragments from the temple, have since been safely relocated to the Mit Rahina Museum.